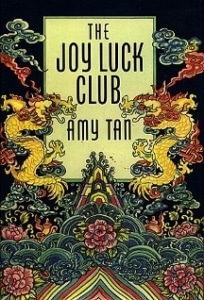 A complex history of stories and jangled voices, Joy Luck Club examines the tumultuous relationship between mothers and daughters with the added layer of immigration and shifting cultural identity. The four mothers (Suyuan Woo, An-Mei Hsu, Lindo Jong, and Betty St. Clair) are first generation Chinese, immigrants with hidden histories and the scars of living compounded by the terror of a new country and the desire to hold onto tradition and the identity it assigns. The four daughters (Jing-Mei Woo, Rose Hsu Jordan, Waverly Jong, and Lena St. Clair), conversely, see their mothers as antiquities, mired in strange ways of life, meaningless superstitions, and the obstinacy of a memorialized yet shrouded past.

The novel initiates when the founding member of the Joy Luck Club, Suyuan, dies and her daughter Jing-Mei, Americanized to simply June, is pressured to take her place. Ostensibly, the club is four old women gathering for mahjong sessions and traditional food, but as June soon discovers, it is so much more, a testament to strength and survival, initiated during the brutal Japanese invasion of the Republic of China in WWII. A coping mechanism created to find joy in pain and sustain the human spirit, the club has continued to morph, becoming a receptacle for memories and a monument to the sustainability of the human spirit. The Joy Luck Club has also become a repository of unique culture, a strange idea and uncomfortable world for the four daughters of these strong women who see themselves as having moved beyond their roots and are instead enmeshed in what they see as real world difficulties. Suyuan’s death, however, and June’s discoveries leads to the revelation of generation gaps, the beauty and strength in mother-daughter relationships, the crises of identity, and the repeatability of past mistakes, passed from generations. Here we see the mothers’ own secret hearts, their fear of remaining always unknown to their daughters, and their struggle to help their children. Here we also witness the oppression of over-protective parents, the disconnect between families, the inevitable waxing and waning of love, and the immortal truth that no one is truly known or truly remembered.

My first introduction to Amy Tan, I decided to go with the classic Joy Luck Club, despite some seriously stellar recommendations from, ironically, my own mother to read The Valley of Amazement (which I am now reading.) The Valley of Amazement is a very un-Tan-like novel, an exception to her style and a breakout from her approach. Before meeting Tan in her rebellious, shocking glory, I wanted to first go to the novel that has initiated so much chitter and launched Tan into schools, book clubs, and houses across the world. Not as well liked as some other offerings, such as The Bonesetter’s Daughter or The Kitchen God’s Wife, Joy Luck Club is more talked about and more of a conversation starter centered on the uniqueness of human relationship, memory, identity, culture, and all the experiences that coalesce to create not only a person, but generations of people.

Told with the distinctive sound of eight different voices, the novel is a merging of short stories (almost), as each mother and daughter speaks independently of one another. The conversations are not arranged in any back-to-back fashion, but are instead a free-flow of voices relating defining moments in life. This is the book’s great strength and also it’s one weakness. Each voice is distinctive, real, driven by emotion and the nostalgia of looking back over time with understanding, even a certain element of self-forgiveness. The mothers’ stories do correlate with the daughters’ in that unique experiences have led to distinctive ways of raising children, imbuing them with certain fears or certain strengths, essentially unconsciously building out the future based on a complicated pattern of what is known, what is suspected, and what has already long ago happened.

Amplifying the disconnect between mother and daughter, figuring out which daughter belongs to which mother was my only qualm with an otherwise faultless and moving introspection on bonds and transition. Perhaps it was just me, but the initial names were introduced too quickly and since the stories did not follow a particular, defined order, it was difficult to relate which story belonged to which character. I soon began referring to the characters by what they had done or achieved and trying to piece them together like this. Of course, the difficulty is partly in the multitude of voices. Eight distinctive main characters is a lot to have in any novel, especially one that is non-linear.

Sometimes the daughters were mentioned or were otherwise tied back to their mothers. Sometimes – not (or at least seemingly so.) The full complexity of family, then, become more difficult as I was drawn into the story and the engaging way in which it was told. I lost track of who was related to whom and who was friends with whom. Fortunately, I ultimately didn’t care (although I should have) because each voice and each story was so impacting – I mean, just plain good – that I loved the tale despite my tracking difficulties.

The reason for all the acclaim is partly in the telling – Tan captivates with her command of language and ability to register emotion with an understated, poignant elegance – and partly in the meaning. The meaning is a two-fold examination of mother/daughter relationships (Tan’s specialty) and cultural identity, specifically the disconnect between first and second generation Chinese immigrations. The disconnect is broad in how the characters are perceived by the Americans around them and specifically honed for how the second generation children perceive, and attempt to discard, their unique heritage. It’s understandable and tragic, with all the elements of an argument for which no sides can be taken and yet both can be deeply, painfully, understood.

Despite having an old, beat-up version of this novel somewhere in my “stacks,” I decided that my first introduction with a multi-narrator novel should be via audio book. This was a wise choice and helped my tracking issues since the narrator, Gwendoline Yeo, provided subtle variations on her voice for each character, further grounding the reader in the idea of a cacophony of voices combining together to form an intricate, introspective story. Yeo’s breathtaking empathy with the characters further enlivens the story and heightens the reading experience, making this a “must” for experiencing Tan’s most acclaimed work.