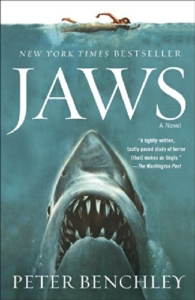 A Classic Tale With Teeth

Having my end of summer beach time on St. George’s Island, Florida with its semi-secluded beaches and miles of breathtaking vistas was enough to inspire me to go classic or go home. So, already paranoid by a lifelong fear of deep water and stunted by the inability to swim, I packed up both Jaws and Moby Dick for my beach time reads. While Moby Dick made me question my very desire to read, Jaws had me spell bound and roiling with internal fear before the plane wheels even touched down in Florida. Gory and supernatural, the book Jaws is a far different feel and story than Spielberg’s cult classic.

Haunted by social mores and economic crises, the ironically named town of Amity is hunted by a Great White Shark with an odd, preternatural sense of divine retribution. Jaws explores class differences between the snooty summer residents and the down-on-their-luck cold blooded merchants of a greed-centric town. In between, heart pounding shark action reveals the fragility of human life and the danger that lurks in all desolate sea-side beauty.

Starting as it means to go on, a drunken one-night stand on the beach ends in bone crunching terror as the romantic setting of swelling waves and gentle moonbeams ends in silent death. Finding the disappearance of his companion the next day, the deserted lover is embarrassed by the fact that he doesn’t even know the name (nor the looks) of his companion. And so, the vibe begins. In a ruthless place, ostensibly ruled by survival and prone to far deeper and deadlier undercurrents, Jaws pits the one good-guy, easily swayed Chief Brody, against a cast of selfish characters. We have a cold-blooded town who wants the deaths hushed up and the beaches open in the name of necessary commerce, a journalist in the mayor’s pocket, and a mayor hooked to the mob. The only person Brody expects in his corner is his rich girl wife who, with the introduction of the new ichthyologist, is more interested in rekindling her youth and social standing than in the insatiable fish which hunts the waters off-shore.

It’s a moralizing tale that is just as tantalizing as it is at times vicious. Carrying the elegance of fin slicing through water and the unexpectedness of a train-wreck, the story weaves between what’s below the water and what is occurring among the human residents who constantly put personal and political motivations above protection of lives. As if the story didn’t seem non-subtle enough, Benchley at times takes a step back to look, with something between abhorrence and sardonic pity on the pampered residents. Yet, the shark keeps taking the innocent and not the guilty as proven by the second victim: a helpless child murdered in a heartbreaking sequence. Even still, the beaches stay open and opposition counters Brody’s helpless pleas to ease his conscious and “do right.”

If you’re a fan of the movie Jaws which was inspired by Benchley’s novel and brought to acclaim by Spielberg’s skill, this short book is a mixed bag. In many ways (if not in most) Spielberg took the base story and recrafted it, creating different characters, dramas, and a totally altered emotional vibe. Spielberg claimed that none of the novel’s characters were likeable (a valid point, with the somewhat exception of a troubled Brody) yet the movie is more hard-core action, shark-eats man, merged with tinges of lightening humor. The novel, however, is more a story about the people and the swift judgement which comes to a coastal community who puts dollars and personal business before honesty and human life. In the novel, the mob theme and Brody’s wife’s affair are two of the main points of tension, the shark an instigator which ruffles seemingly calm waters. In the movie, however, the shark is everything and the characters and town second to the mayhem. It all depends on what flavor you like, and there is absolutely nothing to keep the reader from loving both book and movie for alternate perspectives on a consuming story.

And while the book certainly isn’t all shark-eats-man, the visceral side of terrifying disaster is more than enough to keep adrenaline high. Sitting on the beach, digging my toes into the sand, riveted by the end sequence (where as in the movie we do indeed get a jumping, snapping shark) I was easily terrified by my fiancé who had snuck his foot further underneath the sand piled under my resting feet and lifted it with a giant scream to startle me. Let’s just say the entire beach was entertained by my reaction. As I spent my vacation week walking peaceful beaches and standing waist deep in the water as twilight kissed the flushing face of the shore, my imagination conjured sharks and judgment making Jaws a truly regrettable choice for the beach.

Sharp and sleek, the narrative flows in and around itself, exploring elements of pure horror amid the conundrums of society and the torn, but weak, human spirit. Guarded by Benchley’s introduction, deconstructing the myth around sharks as monsters and advocating for oceanic protection, the strangeness of the story is nicely balanced – a righteous fairy tale with an unexpected conclusion. Edge of the seat, riveting, and yet deep in an unsettling way, Jaws is a short read with a lasting impact and a relevant message.