I Owe You One 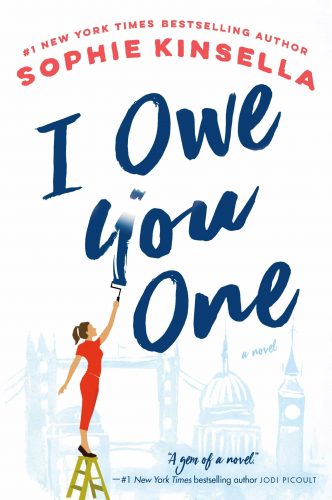 Fixie is all about family. She is, after all, the fixer. The responsible one. The quite one. The one who cleans up messes. So, when Fixie’s mom, who runs the family’s store, is forced by her health to go on an extended holiday, Fixie is all about keeping the family enterprise together. But her siblings have other plans. Her flighty sister is only interested in yoga and avoiding her husband. Fixie’s brother is worse: his bad business deals could put the family store – their dad’s life’s work and legacy – under. But while Fixie is all about fixing things, she is also the silent one who sweeps up after everyone else. She can’t take this situation over.

Meanwhile, Fixie’s longtime crush is in town, and she wants him to stay. When a chance encounter with a grateful stranger leaves him in her debt, Fixie does the unthinkable. She calls Seb (the stranger) and gets her new boyfriend a job. But things aren’t what they seem, and as she gets to know both her boyfriend and Seb better, she begins to question her own life. Maybe it’s time for Fixie to stop taking things lying down.

I Owe You One was another cute offering from Kinsella, light-hearted, bubbly, at times funny and at other times heartwarming, predictable but in a good way, and (naturally) star-crossed. Our family-focused heroine is set to learn a thing or two about family and about herself, and as her shyness melts circumstances go from comedic to uplifting.

Of course, there are no surprises here. There is the bad boyfriend, the good unattainable guy, the loopy family, and the one girl stuck in the middle who has to work it all out through a series of errors. We know that there will be a happily-ever-after, that the star-crossed lovers will eventually untangle the threads, that the good guys will win (with minimal damage), and everyone will dash away their tears and live happily ever after. And that is just perfect. That is true Kinsella.

Along the way, of course, Kinsella somehow manages to play our emotions and even though we know the formula, we still get all the feels just as if we had no idea that everything would turn out all right. I’m not quite sure how Kinsella works this magic, how she makes me so entirely invested in her world and her characters, but she just does, and I Owe You One is no exception. It’s another feel good, sweet story that captures and captivates. Highly recommended.