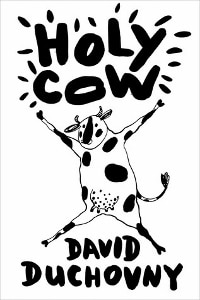 Best known as paranormal detective Fox Mulder and womanizing novelist Hank Moody, award-winning television actor David Duchovny – who received an MA in English Literature from Yale University before he became famous – has recently tried his hand at writing fiction.  The result is Holy Cow, a light-hearted exploration of what happens when a determined dairy cow gets an idea in her head.

Elsie Bovary, a happy-go-lucky cow who enjoys hanging out on the farm with her cow friend Mallory, tells how her peaceful pastoral existence is abruptly interrupted one night after the two pals sneak out of their enclosure one night.  Tempted by the glowing “Box God” in the human’s farmhouse, she peaks through the living room window and happens to see a television show that reveals some of the more disturbing truths about industrial meat production.  Traumatized by what she sees, Elsie finds that she’s suddenly able to make sense of much of what happens on the farm.  Completely appalled by her new understanding of humanity’s carnivorous villainy, she decides to escape.  The rest of the book tells of how Elsie teams up with her similarly motivated friends – Shalom the pig and Tom the turkey – and travels the world to seek her freedom. 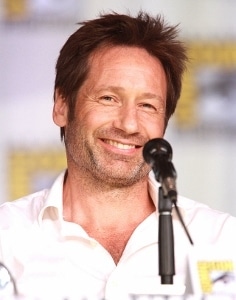 The story is often quite amusing and the characters Duchovny’s created are endearing, but in his effort to create a modern fable about the evils of meat eating, the author’s moralizing gets heavy handed at times.  And while I’ve never read about farm animals on an international air flight before, the plot is too straightforward and predictable to really capture my interest for long.

Although I wanted to like the book, I can’t say that I would have missed much if I had skipped Holy Cow entirely.  Despite a cleverly conceived bovine heroine, the book is just a little too short on substance to be worth reading.  While I understand that “serious literature” was not really Duchovny’s primary goal here, I didn’t find his playful romp particularly captivating.  Not recommended.