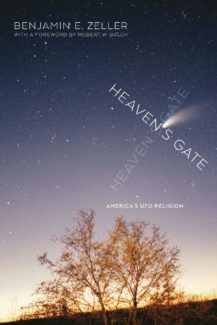 A Close-Up of a Religion About Aliens and Suicide

In March 1997, thirty-nine people ritualistically killed themselves to board a spaceship and become aliens. This was the result of a cult two decades in the making, a mix of Protestantism, New Age philosophy, Ancient Astronaut theory, conspiracy theories, and science-fiction fandom. The cult, or new religion as Benjamin E. Zeller terms it, most often called Heaven’s Gate, now remains, living in our pop culture and collective memories. But what does it say about our uniquely American culture, our inability to separate fact from fiction, and our religious cherry-picking?

If you’re expecting Heaven’s Gate: America’s UFO Religion to be sensationalistic or even deliciously shady, then go elsewhere. Zeller treats the topic from an entirely academic and mostly non-condemning standpoint. This is where the story losses some of its bling (no cult-ish horror to portray) but gains its thought and relevance. Zeller steers away, even disowns, the idea of brainwashing and instead spends a lot of time looking at what makes people do and believe the things they do. How can you convince thirty-nine people to kill themselves (or for that matter, make them believe they are embryonic aliens destined to shuck off human weakness and go to the Next Level)? What does it mean that such a religion, one that specifically builds in popular culture and technology, has emerged?

Zeller starts his book by looking at the cultural and religious origins of Heaven’s Gate, then transitions into discussing who joined and why, follows this with a closer look at the religious structure of Heaven’s Gate and its theology, briefly dips into the daily manifestation of members’ beliefs, and finally concludes by looking at what he proposes was an inevitable end for Heaven’s Gate – suicide. These topics are examined across six chapters, and Zeller has a respectful approach to Heaven’s Gate, explaining how this New Religious Movement (NRM) had its own internal consistency (not so sure about that personally) and appeal to a certain set of individuals – namely serial spiritual seekers. Zeller explains NRMs in general before introducing us to Ti and Do, or as they were more commonly known to those outside Heaven’s Gate, Marshal Herff Applewhite and Bonnie Lou Nettles. He takes readers into the past of the founders and then shows both their charisma and startling lack of organization, with only a few true proselytizing efforts marking the twenty-year span of Heaven’s Gate, before pausing the sequential narration to talk more about what being a part of Heaven’s Gate constituted before focusing on the group’s finale and tying everything together, delivering his final points about what Heaven’s Gate really means, beyond just an interesting and tragic moment in the history of thirty-nine people.

The book has two focuses, a historical and academic narrative, and Zeller’s own conclusions, which also have a removed and intellectual, albeit mostly convincing, flair. To Zeller, Heaven’s Gate was an inevitable product. As our culture grows forever more individualistic, we pick and choose our own beliefs. The merge between western and eastern religion is an American extravaganza, everyone building their own custom religion from the pieces they most like. Zeller also talks a lot about the influence of a good story and of popular culture as well as Heaven’s Gate’s use of the just-then emerging Internet and their fascination with a budding technology. Zeller never draws a conclusion that this or that practice is bad, nor does he condemn the tendencies of current culture or even those who joined and stayed with Heaven’s Gate. He states it all as facts. We will see more NRMs like this in America. 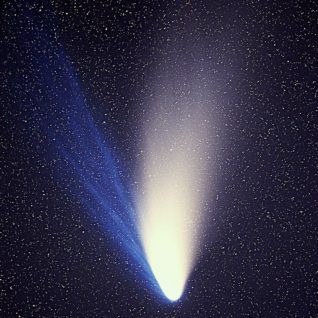 Zeller also gives us some pictures, as we walk through the odyssey of Heaven’s gate and its continued survival after Nettle’s death and under Applewhite’s changing philosophies and understandings of the good alien’s intention (if you’re curious, you’ll just have to read it.) Combined with the text, the graphics tell a story that may be a little old now but is nonetheless relevant and hard to understand from the outside. At our root, many of us understand being willing to die for our beliefs – but such beliefs – aliens and ships, a cult of celibacy and intentional isolation, good aliens and bad aliens, Star Trek, Hale-Bopp, and Applewhite’s eventual “realization” that he was Christ returned . . . how could such a thing come to pass? Heaven’s Gate: America’s UFO Religion answers many of these questions but leaves us posing more. We understand a bit more about the people who chose this journey, but we are left to ponder the significance of its very existence and its sustained place in culture, long after the departure of its adherents.