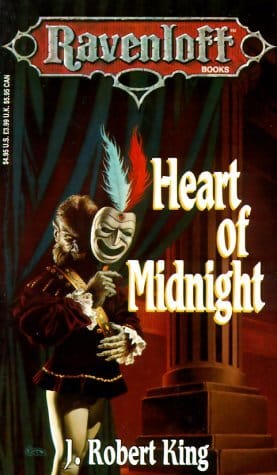 All Casimir has ever wanted is revenge, at any cost. As a child, there were no games for him. Only thoughts and plans, vague memories of the night his father killed his mother and tried, but failed, to kill him. For Casimir, stuck growing up in the orphanage with only one friend, there are other things as well. Darker things that no one knows, that no one suspects. Secrets in the night that leave him covered in blood by the morning, satiated on flesh but still longing for revenge.

In Casimir’s part of the realm, song is the answer. A bard (read Meistersinger) rules Harmonia, and the current Meistersinger is none other than his erstwhile father. When the time comes for the competition that names the new ruler, Casimir discovers how his father has lead for so long and begins his scheme for ultimate vengeance. But there are other forces, those darker than revenge and even death, and when Casimir conquers Harmonia and destroys his father, he doesn’t find peace. Only greater evil, deeper chasms, and a master villain.

Heart of Midnight was actually the first Ravenloft book I ever read. I discovered it quite by chance at the grocery store, in a for-sale bin of random books, of all places, and fell in love with the cover. It was the first horror novel I ever read and an awakening. From here, a love-affair with horror and fantasy began, a new genre of stories and inhuman villains spooling out before me. Because of that, Heart of Midnight has always had a very special place in my heart (and an honored pace on my bookshelf). It is not, however, the best Ravenloft story.

The premise here concerns a family of secret werewolves and Casimir’s duality. His revenge drives him towards his bestial self, yet there is something better here. He does have the capacity for love and friendship, yet he is mostly a hateful and static protagonist, stilted where he should be conflicted, harsh where some light of guilt should show through, unconvincingly repentant and mostly obsessed. Joining him is the great bard and master of Kartakass, Harkon Lucas, who makes later appearances in the Ravenloft series. Lucas is the catalyst here, the reason that Casimir’s schemes move forward (or backwards as the case may be) and one of the few active characters. Yet despite his suave evil, he too is stilted and predictable, reading lines where he should be breathing terror, playing the typical villain role and luxuriating in evil to an unbelievable degree.

The story starts and stops, and the concept of singing for leadership is frankly ridiculous. Only towards the end does the book find its feet and fall into a cadence. The last line is shivering and immortal, the kind of sentence that just resonates with power and imagery. But the book itself rarely gets there, disassembled by bland characters and a choppy pace. That’s not to say that parts of the story aren’t quite good (they are). This is the book after all that made me fall in love with the horror genre in general and Ravenloft in particular. But time has not been kind, and a look back after many years shows this as a story with promise that never delivers. It’s not bad, but it is bad in parts, ultimately amateurish. It’s worth reading for Ravenloft fans, partially for its gothic charm, but there are better introductions to the dark domains out there and, ultimately, better horror novels. Still, I’m grateful for everything this book revealed to me and the love affair it started. Recommended, in a weird sort of way.