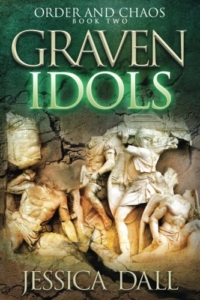 Returning to the realm of anarchy, war, and destiny, the god-like beings Order and Chaos, reincarnated throughout the centuries and currently inhabiting the bodies and human essences of one Palmer Tash and the other Brier Chastain, are now aware of their individual realities. Yet, the ultimate questions are unanswered. Recovering from an earth-rending war that literally rained blood and called the dead from their graves, both Palmer and Brier are not only coming to terms with their powers but with their perceptions of who they are. Continuing the mystery from the first book, Graven Idols examines not only the characters’ destinies but the enigmatic and changing identity of their essence through the ages. Is Brier an individual person, a god, a unique combination of both perhaps? The question gains epic proportions when she begins seeing visions of her past selves and these visions interfere with her effective operation in the real time world. Meanwhile, Brier’s fluctuating powers and terrifying blackouts are effecting Palmer’s ability to heal and slowly destroying him from within. With time running out and another enemy desperate to steal power, Palmer and Brier must overcome their personal emotions and unravel the mystery of their existence.

Picking up with the blasted Augarian after the conclusion of Raining Embers Brier is devastated by the realization of her own destructive nature. Further disillusioned by the destruction of her own birthplace and a castle she loved so well, or at least explored prolifically, her original trauma bleeds into something more supernatural and continual, following along with the remembrance of her mother and Marina (her previous far more vengeful incarnation.) As she wrestles with these internal demons, her childhood best friend and pseudo-finance Nico demands emotional ratification, yet everything has shifted for Brier and it is unlikely that she will ever find the person she once was.

Managing a precocious Rosette and attempting to filter through the static of visions and omniscience, Palmer’s waning powers and unreliable healing abilities continue to be a concern. Even worse, Palmer suspects that everything is related and whatever is happening to the reticent, moody Brier is happening to all of them. Sure that she is not divulging the full secret, Palmer tries to hide his own limited knowledge, leading both characters into further danger and encounters.

Nico, a side character before, now becomes a prominent point-of-view protagonist, his warring emotions and extreme nature giving an edge of human instability and dysfunctional drama to the already multi-layered atmosphere of this vibrant, devastated world.

Transitioning chapters alternate the narrator between Brier, Palmer, Nico, and even occasionally my personal favorite, Rosette. Developing the inter-character reactions and the basis of each complex personality, the growing cast of story-tellers adds a poignancy to the narrative and a dimension evocative of that Game of Thrones entire world drama. Each alternating view grants shifting paradigms of concerns and mystery, encouraging the reader to piece together various impressions, fears, and wants into a complex mélange. This further brings the half Renaissance, half fantasy world to a touchable version of life.

Likewise, mixing fantasy with a coming-of-age narrative, Graven Idols continues the unique two pronged approach of the Order and Chaos Series intermixing breath-taking, fast paced action with traumatic internal dialogue and the shattering loss of self. Brier and Palmer have both manifested differently over the ages, and they are both haunted wondering – is their current situation, emotions, and personal ties all a simulacrum? Are there real gods bigger than themselves, a meaning for all of the cosmic devastation? Is this all pointless and if so, what is their role? Are they saviors, or killers? Unable to return to their normal lives and escape the pull of power, trailed by another enemy intent on kidnapping Chaos, both characters are never given room to unravel the questions as they fight for life. This lends a unique keening quality that goes along with the blood-pounding fear of the story. The desperation for knowledge, the seeking of self, and the overarching “what is all of this for” questions puts these powerful characters in vulnerable positions. The supernatural elements are exciting and thrilling, capturing the addictive fantasy vibe of imagination and limitless possibility in a world so like our own. Yet, the human nature and the echo of our own lives comes back to us and draws us in to the story just for the dissolute characters who people this struggle.

Where the first novel ended with destruction, this offering ends with an uneasy sense of temporary peace – a liminal place where the characters are neither in disaster nor finished with their quest, but simply waiting to make decisions. In a way, especially since we know these people, have invested in them, have seen them through danger and conjured battles in which we fought by their side, this ending is even more disturbingly effecting. It’s neither happy nor sad and the few answers we do have now bode well for the future, yet there is a flicker here. The key choices have been made and now we rest, so briefly, in the somber silence at the middle of the raging storm. I eagerly anticipate the next adventure in this stunningly atmospheric fantasy saga.