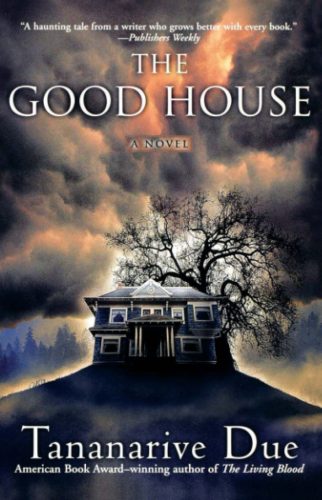 A Legacy of Voodoo and a Cursed Home

The Good House is known to be just that: a blessed place. After all, it is the only house that survived a mudslide that leveled the entire town of Sacajawea. It is Angela’s heritage, this beautiful house in this backwards, rural little town. She loves it for the memories of her Grandma Marie, for the wildness of the landscape, for the very goodness that pervades it.

It seems natural that she should return to this house to repair her marriage with Tariq. But when her young son Corey shoots himself on the night of her July 4th party, The Good House turns into one of horror and pain. Angela can never go back. Not to that house. Not to her husband. Not to that life.

Years later Angela is confronted with selling the house and her friend convinces her that, for the sake of her heritage and childhood, she should return one last time. She should make sure of her decision. But something has tainted the house. Something has been patiently waiting for Angela all this time, for the second part of its insidious plan.

The Good House, with its eerie cover and Southern gothic, haunted family vibe is a good concept. But man does it DRAG. This book could easily be half the size, preferably less. It starts with a bombshell prologue about a possessed girl and a voodoo priestess who is half good, half inflamed by anger. But then it jumps to modern day, and we are stuck with Angela preparing for her party, swimming through enough foreboding for ten books, and discussing the admittedly dull nature of an imperfect marriage and a sassy teen. It’s hard to like the characters. Angela is self-centered from the first page, talking about how outspoken and politically woke she is, yet despite her t-shirts, her vibe is something all together mousy, something of the follower and not the leader. This is indicative of how she’ll be drug, ever so slowly, through the realization of a plot where skittering leaves is considered scary. And that’s only for starters.

Angela’s family is little better. Tariq has a more complete character arc, being a man who loves his wife but also has anger issues because of past trauma. Yet, his borderline off-the-handle menace becomes old on page three. We know he’ll be the catalyst for the big bad to creep into their lives, and sure enough no surprises here.

Corey gets more page space, but he is a teen who thinks he knows something and who, in the tradition of all horror stories ever, messes with something beyond his understanding. Yep, you got it, Corey starts a voodoo ritual and kicks off a string of events that tediously lurch, zombie style, towards a confrontation and a bizarre sort of happily-ever-after conclusion.

Are you getting my point that everything here is done at the speed of an asthmatic snail crawling up a steep branch in the middle of a pollen storm?

The idea behind the plot itself isn’t so bad. We’ve got some voodoo and we have a “baka,” essentially a demon that is plaguing the family for the past hubris of Grandma Marie and is seeking to slowly possess them. Yet, the voodoo here is distinctly the clean cinematic version and it is never presented or understood as the problem, despite the consequences. Angela herself is all for fighting fire with fire, and this makes little sense after her full understanding of just what happened with Grandma Marie and what is assaulting this once good house.

It ends on a very smarmy, voodoo is totes-ok, white-witchcrafty nonsense note that destroys the warning behind the message and left me shaking my head. Did they learn nothing? Were, you know, the dead bodies not enough indication that maybe this dark realm of magic was best left well enough alone, especially by inept people who only sort of maybe read a few old transcripts and plunge right in before doing even a secondary double check on Wikipedia? And what of this spirit realm where Grandma Marie causally hangs out, to come in a deus ex machina style when the characters get overwhelmed? Of course, this is necessary because Angela’s reawakened love for an old boyfriend, which takes up most of the book, leaves her with no time or inclination to learn about about voodoo and the baka.

Just ugh. How did this get five starts? The only good thing was I listened to The Good House on Audible, so it went faster than my usual hardcopy read. Not recommended.