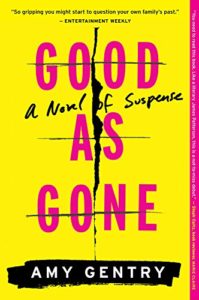 A “Meh” Plot, Good as Forgotten

Fast forward a few years, past the endless billboards, the support groups, the broken marriage, the rebellious remaining sibling with punk hair and an attitude. What would you do if your missing sister returned home? What would you do if the child whose absence was the deconstruction for your entire world rang the doorbell one day and like that, the past and everything that is broken unhappens. Could you accept it? What would you sacrifice to keep believing that it is real and the worst is no longer the fakeness of your daily life, devoid of hope.

Good as Gone, Amy Gentry’s blockbuster debut and Book of the Month’s October 2016 thriller pick, starts out with an atmospheric, literary terror-scape of living with loss. Alternating between Anna (the mother’s) viewpoint and that of her child returned from the dead (the possible imposter Julie), the stakes begin high, the tone tense and eloquently beautiful in the way of all grand heartbreaks and broken dreams. The story of the abduction, the strangeness and the unfairness of being the sibling “who survived” all interweave to create this portrait of a broken family, filled with the useless leftovers of blame. And yet . . . what begins as gripping and razor edged soon turns murky and confusing, Gentry’s strong control of the prose losing itself in its attempted cleverness. Readers remain astute, invested because of what the first pages have done for us, yet rapidly distanced. In the end, what promises to be more than the regular and ever popular Gone Girl-ish copy-cats is just that: another thriller with a bit of soul but ultimately more potential than payoff.

The emotions that begin as keen – Anna’s distrust and broken relationship with her remaining daughter, the now rebellious and haunted Jane, remain nebulous. There is a sense that Anna, as the adult who should know better, regrets blaming a little girl for inaction, and yet nothing goes further. There is no introspection on this and while readers feel that at least owning up to it is a necessary step for character growth and plot momentum, Anna remains forever numb and Jane, the sibling with all the backlash of guilt, showcases her obvious problems with slammed doors and funky piercings, yet ultimately her trauma remains skin deep. She’s broken. Anna’s broken. Tom (the father) is broken, and whatever and whoever has shown up on the doorstop claiming to be Julie is obviously broken, yet this is understood intellectually; Gentry has essentially told us that these people with their complicated patterns of blame and denial are messed-up and responsible for fracturing each other. Yet, we see none of this. The story, claiming so much depth of complicated emotion, never dives beneath the obvious shallow layers of evident artifice. Whatever. At least we will find out what happened to this missing girl, now returned from the dead with (evidentially) some sort of traumatic and wild story to titillate the “and by the Grace of God there go I” rubber-necking of a sensationalistic audience.

Julie’s story is deliberately confusing with alternating timelines, a long history of names, and actions that in light of the conclusion are completely inexplicable. Gentry obviously wants to lead readers astray (a common modus operandi of the thriller genre), but she makes this subterfuge too obvious and ultimately fake. Readers like a clever story that twists upon itself and around their expectation. Readers, however, hate the feeling that they are being lead on and played with and the curving nature of Good as Gone leaves readers feeling more as though their collective chains have been pulled than as though a clever novel has outsmarted them.

With all this going on, the final delivery of the Julie story has some major gaps and bizarre decisions. The characterization of a girl alternately battered and hardened makes little sense in light of the weirdly emotional and ineffectively planned confrontation. In the end, the characterization of Julie (whether she is imposter or the original kidnapped girl) rarely matches with the depicted actions and attempted emotional closure provided within a strange ending which left more questions open than it ever answered. In the conclusion, readers feel that Good as Gone had some potential, including creepy moments of bone chilling clarity and the penchant to hit upon the right word or feeling to craft an entire scene, yet the novel felt like a draft – the author trying things on and discarding them without returning to edit, the conclusion a big guess with a question mark in the margins. Readers will still find themselves enjoying aspects of the book, yet when the final page rustles closed and we scowl in dissatisfaction, the plot will soon be forgotten. Good as Gone will end along with a pile of other quick read thrillers that we kind of got into and kind of didn’t, neither great nor horrible.