God Is a Man of War 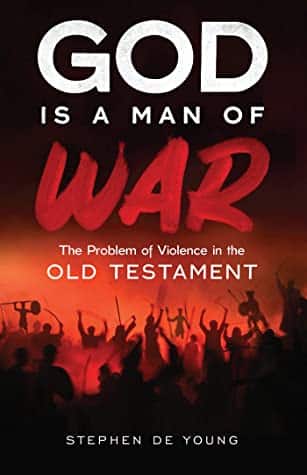 Tackling the Difficult Concepts in the Old Testament

I discovered God is a Man of War through a YouTube recording of Father Stephen de Young discussing perceptions of unsubstantiated violence and brutality recorded in the Old Testament. De Young’s logical arguments and his willingness to address the proverbial elephant in the room drew me to reading the larger, more in-depth work from which he was drawing summary arguments.

De Young starts out quite in-your-face with a refreshing honesty. The verses, even the entire chapters, which we as a society find distasteful and downright disturbing are there and they have to be dealt with. Platitudes that make these moments into allegory or all together ignore them, cherry picking favorite parts from the New Testament and ignoring everything else, are temporary and ultimately worthless. De Young advocates actual study, pushing us to look at the moments in the Bible that make us uncomfortable, reminding us that the very morality we call upon to judge God’s supposedly violent actions is a morality derived from Christianity – from the teaching of God.

So what’s missing here? Did God himself change between the Old and New Testaments? Did he do a course correct, and if so, why all the foreshadowing of Christ in the Old Testament, all the carefully laid moments that tie the two books together? The Old Testament itself is the proof for Christ, setting the stage for recognizing both Him and His teachings. With this in mind, then, how can we throw out the bathwater without losing the baby?

De Young structures God is a Man of War in a twofold manner, spending the majority of the book laying the groundwork for how to read by giving readers a historical prospective and breaking down the meaning behind brief passages that, on the surface, are cringe-worthy. At the end of the book, de Young takes a few of the examples that trouble most people and uses his historically informed reading capabilities, as well as a heighted look at translations and word meaning, to show how what he has just taught can be applied. The results are staggering and, ultimately, after reading God is a Man of War the Old Testament suddenly makes a lot more sense.

De Young is an Orthodox priest, which is something a bit out of the ordinary for yours truly (and probably many of his general American readers.) I grew up fundamentalist (similar to Southern Baptist, but in a less known denomination). I later abandoned this during some truly awful college years and later returned to a more liberal form of Christianity, starting off Episcopalian and later moving to Anglican. If I was forced to call myself anything, it would be difficult, because ultimately most denominations have some things very right and others quite wrong. Orthodoxy is unique in that, like Anglicanism (and to a lesser extent Episcopalians) it follows a linage or history back to the church fathers. The usefulness here is that we get the wisdom and understanding of previous generations of Christians, many closer to Christ’s actual time, to help build a communal understanding. Orthodoxy takes these even further, as evinced in De Young’ text, and some of his explanations of the history, especially of the Canaanite peoples and holy war, might be surprising to most readers.

For example, de Young notes how the structures of the ancient civilizations warring with Israel were set, especially religiously. He explains the idea of the kings as a hybrid between humans and the gods the clan worshiped. Israelites recognized these gods as being real, albeit demonic entities. This insight gives us a context of what the people in the Old Testament knew, how they interacted across nations and cultures, and what God was actually saying regarding the extermination edict. In other words, the war was directed not against humans, per say, but against spiritual entities. Readers now cancel this out, seeing war only as a way to expand kingdoms and gain materiality, but de Young takes a closer look at just what was ordered, against whom, and why. This closer reading, with the context of time, place, and belief, makes a lot more sense overall, especially to the way Christians have come to understand God through Christ.

Of course, I can’t give it all away, and I am hardly learned enough to break down the points de Young makes. But these are the sorts of arguments and the kinds of approaches you will find in God is a Man of War. This book functions less as an apologetic and more as a historical interpretation and recounting of what generations before us knew very well and what has been lost in the context of time and to some degree the protestant approach. It’s certainly interesting and definitely convincing in many places. Does it answer all my questions? No. Does it leave me with a warm fuzzy feeling for every concerning passage in the Old Testament. No. Does it open a new world for me and encourage me to move closer to God and read what He is commanding with an open mind and a desire to truly understand (as averse to just dusting those troublesome bits under the rug)? Yes. I would say that this is certainly an essential for all Christians and a great place to start the dialogue on the Old Testament. Ignorance, after all, is never bliss.