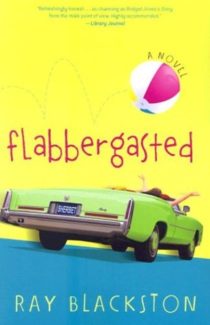 Listening to Ray Blackston’s Flabbergasted while the warm summer air flowed through the car windows, both me and the hubby freshly back from our glorious beach honeymoon, was the best possible way to be introduced to a funny, refreshing, and upbeat series. It all starts with Jay Jarvis, a 20-something stockbroker (ok, it’s fiction), who’s moved east and is consequentially looking for love. Thanks to a tip from his real-estate agent, Jay randomly starts attending a nearby Presbyterian church as a way to meet local girls. What he truly isn’t prepared for is a summer of growth, beach antics, a special missionary who does her own thing in her way, an epic old car, and a realignment of priorities. Along the way the book jots between sweet and happy-go-lucky, with the buoyant scope of youth and possibilities underpinned by a more steadying, serious influence.

Jay is a relatable everyman, a wishy-washy sort of character who’s open to possibilities but not easily convinced. He’s mostly just bored after getting ditched by a long-term girlfriend and finding himself in a new town. Church is a way to meet people, but he’s not entirely sold on the God thing, especially as he meets several hypocrites early on. Ali, a charming missionary on break from her mission in Ecuador, however, is a different element entirely. She is free in a way that is not definable. She’s joyful and fluid, interesting and truly helping, and not caught-up in pedantic arguments. She marches to her own beat and makes her own way in the world and its this, plus her lithe form and mysterious ability to weave in and out of social life, seemingly disappearing at will, that piques Jay’s curiosity. When the church youth group announces a beach retreat and the skeptical Jay finds out that Ali will be there, he decides to throw caution to the wind and head out for sea and surf.

From here, Flabbergasted’s aura melts into summery nostalgia. Blackston has a longing way of perfectly evoking those dreamy days on the beach, from the lazy wonder of vacation days, the grittiness of sand on sunscreen flecked skin, to the semi-dangerous adventurousness of the ocean itself. The entire atmosphere bakes readers into a cozy hopefulness and a land of possibilities and infinite naps on sun soaked shores.

Sherbet, the 1975 lime green Cadillac convertible, and the novel’s centerpiece for both cover and adventuresome romance, keeps the atmosphere peppy and unique. Jay has many chances to ride in and drive the daring Sherbet as the beach vacation goes on. Gathering a small clutch of male friends around him, including a likable surfer dude, Jay and friends hang out with Ali and speeding, high-on-life girlfriends to create a dynamic and often times giggly group of happy young people. There is, of course, romance in the air, including the typical misunderstandings and shy getting to know-you doubts buoyed by an ineffable sense of all things being possible.

As the vacation all too rapidly winds to a close, Jay has gotten to know Ali better, but he’s also made friends and connections and started to compare the difference between the pretentious scripture quoting Christians of the tour and the laid back and loving group of which he himself has become a part. And it’s here that slowly things start to change.

Back in the stockbroker biz with a big promotion and impending move to speedy New York, Sherbet is a neon colored memory, as is the surf and shore and the delighted laugh of a mischievous Ali. He still writes her (although her letters from Ecuador grow further and further apart), yet the hilarious church dating scene has lost something without her and the other girls are all playing the same game he is. Perhaps it’s time for a bigger life change – but can he take that leap on faith and hope alone?

Overall, Flabbergasted is a chicken-soup-for-the-soul feel-good type of beach read, with a positive message and a relaxing feel wrapped together with romance, youthful adventure, and the elixir of vacation. While it does occasionally (mercifully rarely) get bogged down with its own surprising prudery at times (the men have a weekly confessional about “impure thoughts” and holding hands is apparently a really big deal) it’s mostly lite on the sermon and strong on the heart-felt goodness of really caring about (and therefore helping) people. That being said, the ending felt quite dissatisfying after the build-up. The romance needs to take the next step into some kind of surety and while the motion is grand and the ending decisions indicative of a big life change, readers wonder if the gesture was wanted or accepted and what kind of future the characters might (or, worse yet, might not) have in the end. But hey, if you like vintage cars, beach time, and young love, you’ll find plenty to keep that sunshiney smile going in Flabbergasted! I’ll definitely be picking up the next in the three part series.