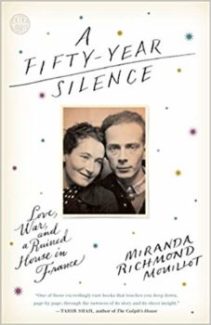 The house was a ramshackle wreck, slowly fading into the dust in the tiny town of Alba in southern France.  But it captured her imagination like nothing else.  Perpetually intrigued by the old structure, purchased – but never inhabited – by her Jewish maternal grandparents more than fifty years prior, North Carolina native Miranda Richmond Mouillot couldn’t resist the urge to find out more, opening up some deeply buried old family secrets in A Fifty-Year Silence.

But the secret of the neglected house was a trifle compared to the much more troublesome mystery that was her grandparents’ relationship.  Or lack thereof.  It wasn’t until Richmond Mouillot was in her tweens that she even realized that these two people in her life had ever had a connection of any sort, despite the undeniable existence of her mother.  As she haltingly adjusted to adulthood and its attendant responsibilities, the author realized that her grandparents’ memories were fading and the window of opportunity to unravel this tangle of enigmas was slowly closing.

So she set to work, ceaselessly nagging her energetic but not entirely cooperative grandmother on this side of the Atlantic and frequently visiting her famously tight-lipped and angry grandfather in Europe, trying to piece together the puzzle of their lives.  Both individuals had managed to survive World War II by constantly moving and hiding out in France and Switzerland.  They were often separated for months at a time, but somehow maintaining a tenuous relationship during this terrifying period.  Digging through old letters and archives and struggling to make sense of the often cryptic testimony of her subjects, the author slowly makes progress, bringing the reader along on her adventure. 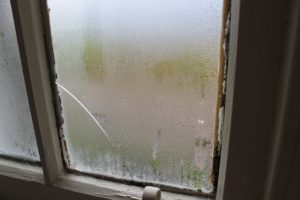 At the same time, she tells the story of her own romance, which blossoms when she decides to restore the old house in France – worn down by decades of vandalism and neglect – working hard to reveal its hidden charms and adapting to an entirely new life in the old local village.  She deftly interweaves the two love stories, maintaining plenty of suspense along the way.

A thoroughly successful triple memoir, A Fifty-Year Silence kept me riveted from beginning to end.  Combining plenty of mystery and history with a fully-fleshed personal story, it even includes a few home remodeling tidbits.  Highly recommended for readers interested in a unique look at the aftermath of World War II.   Or for anyone who simply enjoys a well-crafted real-life mystery.

Check out Dave’s review of a similar book about the offspring of WWII survivors:  A Brief Stop on the Road from Auschwitz.