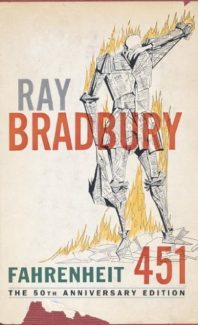 “A book is a loaded gun in the house next door…”

A classic dystopia sci-fi piece, Fahrenheit 451 is considered Ray Bradbury’s most acclaimed masterpiece, a surreal futuristic “what-if” scenario that takes society’s love of distraction to the extreme. In this world, there are no George Jettson like apartments or hoover cars – only an eerily recognizable society where entertainment has been taken to the max and both uncomfortable feelings and dissenting views are conveniently swept under the rug. From the tantalizing zombification of the seashell (an item reminiscent of the iPod or head buds in general) to the surround sound four wall TV where the characters (or “family”) entertain, to the motorway where smashing things (and sometimes people) allows for alleviation of boredom, this is a society where the luxury of not thinking is in abundance. So, no one can possibly be unhappy – right?

Enter Guy Montag, our protagonist. Montag works as a fireman – but the job description has certainly evolved over time. Montag and his associates start fires, more specifically fires of material that causes dissention, unhappiness, intolerance, and general emotional aggrievance – aka, the now illegal substance of books. Montag isn’t exactly happy (or unhappy with his life.) One night, after returning home to a remote wife who has attempted suicide, Montag begins to change. The next-door neighbor, a young eccentric named Clarissee, in her own innocent openness has planted the seed of doubt and watching the mundane sadness of his wife’s life from the outside, and the attempted death she’s too distracted to even remember, he begins to wonder what is in those tomes he burns. Is the sedentary life of having all thoughts and beliefs set, the quiet of a society where idle days with televisions and advertisements directly broadcast into your sleep, really the paradise it proclaims? And what of war – that mysterious impending item glossed over on the news. Who hates their society – and why. Everyone thinks alike – don’t they?

Similar in feel to George Orwell’s 1984, the situation grows from quiet doubt to forced choice. Each tentative step takes Montag deeper into a rebellious underworld. Now not only is his job in danger, but his life as well. An on-the-run outcast, Montag will end-up confronting the truth of his society’s deceptive structure and his own quiet complicity. What he knows, and what he has said, have made him a marked target and as The Hound, an eight-legged robotic dog, tracks him down, the four walled TVs play a blow by blow aerial of his desperate run. Immortalizing the worst in society and the cynical best in humanity, Fahrenheit 451 takes the blank slate of carbon copy characters in a sanitized world and etches the beauty and the pain of living for one man who seeks himself apart from the laws and the rules of his time.

This was my first time reading Bradbury and when the suggestion arose in my book club, I was quite excited to see what the famous cover of an exhausted paper man figure immersed in a dancing wall of flames was all about. I have the amazing ability to be completely unaware of stories and plots that have long been famous and influential, and approached the book with no knowledge of its message or content – which is the best gift you can give yourself when encountering literature.

The poetic nature of the storytelling is immediately immersive, juxtaposing itself with Montag’s sterile, fabricated world. There is no beauty in this world. After all, only Clarissee is “crazy” enough to walk alone for the joy of nature or to notice the intricacies of a leaf. Montag himself is only now waking up and what he sees first is the ugliness of what always was and what he has become. So, it’s with the words that the reader finds a delicious lushness that serves to make the story sadder – more impactful and obvious for its gaunt portrayal of a mentally starved society.

The characterization here is something different in that it’s purposefully sketchy. No one in this world (except the enigmatic Faber) seems to have a history and since everyone is a bot that follows one serial entertainment after another, the uniqueness of individuals is missing. And Bradbury wants readers to notice this alongside Montag who, himself, has only the preliminary beginnings of his own persona, most of which is stopped by the horror of the now and the necessary reactions he takes to save his own life.

Between the mesmerizing albeit gut-punching writing and the revelations of the insidious layers applied by a tyrannical government bent on mind-control and repression of free thought and information, Fahrenheit 451 delivers some breathtaking action. While the book is evidently encouraging readers to think, and functions in many ways as a dire prophecy (recall, it was originally written in the late 50s in response to the growing advent of television and rowdy teens who liked to drive fast), Bradbury never forgets that his grip needs to be just as emotional as intellectual. This takes a heavy book and makes it into a surprisingly fast and immersive read with an ending that you won’t expect but that also won’t surprise you for its ultimate despair. Unforgettable, authentic, unsettling, and poignantly beautiful Fahrenheit 451 is a book that will haunt readers long after the final page rustles shut.

*Note On Edition: I purchased and read the 60th anniversary collection (linked below), and must highly recommend it as essential to the Bradbury experience. This edition contains critical essays detailing the process Bradbury went through to transition his short story of a futuristic firefighter into the book we know now. Essays are presented from Neil Gayman and Margaret Atwood (among many others) and this compilation contains writings from Bradbury himself, including some of his original illustrations.