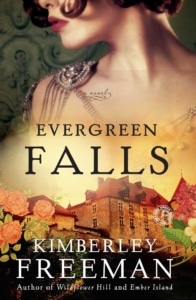 The Roaring 20s, A Murder Mystery, and Forbidden Love

It’s 1926 and among the glamorous bobbed heads and the dapper seeming gentlemen the portent of murder is stirring. Locked into the elegant, yet remote Evergreen Hills resort for the fabulously wealthy and intensely private, addiction, betrayal, forbidden love, sex, and isolation combine during a ferocious blizzard to shatter expectations and plunge sedate individuals into decisions that will haunt them for the rest of their lives.

First, there’s Violet, the rebellious serving girl. Constantly fired from job after job, her would-be-boyfriend secures her a position as a waitress at the fastidious resort. Only this time, Violet cannot mess up because there will be not be going back. Her aging and infirm mother relies on her and despite her air-headed nature and penchant for some flapper fun, Violet is beginning to grow into a world of consequences. Only, the dashing romanticism of a young girl in a seemingly free world may still be too strong – especially when she meets HIM.

Mr. Honeychurch-Black (Sam) and his sister Flora are two of the most prestigious – and secretive – guests. They are also one of the few families who decide to stay in isolation at the resort with a storm unfurling before them – and there are many reasons. Sam has a not-so-secret opium addiction and Flora plus fiancé are tied into his wellbeing both emotionally and inheritance wise. Sam’s flighty moods, erratic behaviors, and blissed out state are a continual testament to the deterioration of a once powerful family name. Perhaps being so far away, perhaps enjoying the solitude of this place, will bring him back around. Only, now he has his eyes on a lowly servant girl, and he has opium diluted dreams of romance and rebellion. Flora’s scheming fiancé, looking to pump up his middle class name by marrying into a prestigious aristocratic background, is less than pleased. Flora, on the other hand, only wants her brother’s love, yet her own position as a woman, and her less than admirable status as chattel for her father (and fiancé), leave her with an odd and discordant sympathy with the starry eyed girl who has no idea just what she is getting into.

Meanwhile, in contemporary times, a young Lauren has finally emerged from the over protective sheltering of her parents oppressive household. On her own, also working as a waitress near the dilapidated Evergreen Falls hotel, which is undergoing a new restoration project, Lauren discovers her first intimacy with a man. As she ponders her parents’ own mistakes and the mystery of her brother’s cloistered life and death, walks through the old hotel lead her to discover passionate love letters and an unsolved mystery, hidden and almost forgotten for many decades. Only now, Lauren has decided that she must have answers and that she must discover them herself. Will she awaken a sleeping past that should, ultimately, be left alone, or is there freedom and some form of atonement in final, brutal honesty?

Atmospheric and compelling, Evergreen Falls has the odd seasonal charm of a cozy mystery and the bite and tension of a no-nonsense drama. Integrating the lively atmosphere of the 20s with its social pitfalls and chasm in class distinctions with modern day repression, the story is essentially a coming-of-age centered around mistakes. Many of these mistakes are catastrophic yet oddly unavoidable and it’s through these relatable trials that the characters, emotional and disturbed, each in their own way, come into a vibrant and demanding life. Whether you’re back in the 20s with Violet or experiencing dating for the first time with Lauren, the novel has a deeply emotional appeal that is neither melodramatic nor (thankfully) depressing. Like Goldilocks bed, it’s just right. And with the finesse of this addictive mixture, Kimberley Freeman instantly jumped onto my radar (and wish list) as an author to follow.

Surprisingly the “murder” (this is touted and sold as a murder mystery) doesn’t occur until the end. In that way it’s a misnomer, but not one that readers will resent. The strength here is the intertwining of the characters and our involvement with their stories and the precarious nature of their positions. When you have an opium addict, a greedy family interested in social pomp, and a frisky young maid with a vague idea of romance then you have the recipe for an interesting – if not explosive – book. Add in a winter snowstorm and an Overlook Hotel like vibe coupled with the natural outcome of human greed and disrespect and then you have the playground for crime – both legal and ethical.

Suspenseful, involving, realistic, and oddly cozy Evergreen Falls has wide appeal. Sure to intrigue you, play your emotions, and finally satisfy you in the bitter end, this tale is more a journey or experience than a simple story, and as such, it will keep reliving itself in readers’ minds long after the final page rustles to a close. Unequivocally recommended.