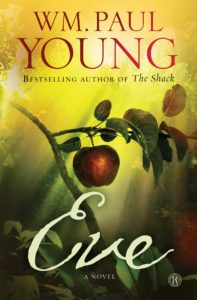 The Author of The Shack is Back!

Best-selling author of the modern spiritual classic, The Shack, WM. Paul Young returns with another intense Biblical and emotional study on the nature of humankind’s relationship and understanding of God: this time from the prospective of a creation narrative. Lilly, a young woman, battered, nearly dead, arrives frozen, cast between worlds and discovered washed ashore by the Finder – John. Together, John and the denizens of his world work together to rebuild Lily – both physically and emotionally. No one knows why she is there, but research reveals that her blood encapsulates the essence of every race. She is one of the true daughters of Mother Eve and she is intended for a purpose – a special mission from God. But even here, in this citadel of worship and reverence, delusion, ignorance, and evil lies in wait. Mother Eve – progenitor of the human race, through visions and mystical revelations, takes Lilly back to the beginning of the world – a true witness to the glory of creation and the poignancy of man’s downfall. However, another emissary, one filled with doubt, is within this secret world and Lilly’s own past threatens to undue her belief in both herself and God’s everlasting grace.

Heartfelt, strange in Young’s distinctive vivid manner of intense theological pondering interwoven with beautifully simplistically natural elements and the overarching capacity of love – Eve is both a spiritual study and an effecting narrative. Lilly arrives broken – more broken than most of us. A victim of life-long abuse, including forced prostitution effected by her deadbeat mother, Lilly is hardly pleased that of all the escaped women she is the only one found alive and not butchered. The barbaric nature of her very discovery, the extreme remedies needed to mend her broken body into some sort of functioning whole (including body parts harvested from her fellow, dead travelers), and a lifetime of self-hatred and questioned worth leave her less than open to this strange world between worlds. Is everyone truly as pure as they seem, as godly, as decent? Lilly is used to deception, to rejection, and ultimately to her own depraved nature. If everyone is genuine, if this is a place of no lies, then she knows she doesn’t belong here and her very desire to be alone is formed from her conception that she is worthy only of being abandoned. Her physical repair is not as complicated as her mental preparedness for a miracle hoisted on her. She is both angry and unworthy and as these emotions jar together, further revelations and memories of her past strike dramatic differences between her present situation and what she perceives to be her allotted fate – her place – in life.

As she questions those around her, she is carried along with Mother Eve to witness how it all went so wrong. This is something no one is ready for, although something we all ponder. The creation is both a beautiful and a dark thing in our imaginations – the beauty of what God has created seemingly soiled by the evil that He – for whatever reason – allowed to pervade. Into the sunlight darkness crept, the serpent sang his song, and for this we must question – if God is good, then why? Why did he not stop this or, if indeed this painful swan dive from grace was inevitable, even bother to create humans at all. Does he delight in mocking our pain? Is He truly good? Ultimately, is He even there? And what if He is just as good as he says, just as ‘there’ as He proclaims – dare we approach in our condition? Does imperfection want to reside next to perfection, to be embraced by it and treated as an equal?

Young oscillates between answering some of our biggest questions and concerns (including the false perception that woman are the downfall of creation and thus men) while also engaging readers in a very deeply personal story of one woman coming to terms with acceptance after experiencing so much rejection. Young has a way with words that is downright magical and an understanding of relationship that is transcendent. Once he says it – we suddenly understand what our souls have been longing to hear, what our hearts needing to understand. In this way he builds more than just a good book – but a meaningful one that shares his research and personal understanding in communion with others who likewise seek the answers to the harder whys in life.

Similar to The Shack, Eve is a bittersweet mixture: half agony and half sublime. The pain and betrayal jumps off the page just as much as the evocative and inspired images of a loving God, crafting man as you would hold and fondle your own infant – the product of your love and pain. Young’s interpretation of creation is not quite what we’re used to – yet the fact that he steps outside of our comfort zones to offer a new interpretation is refreshing, and actually more inline with the image of a beneficent and loving God to which I personally ascribe. Young shows how our relationship with God and its subsequent fracturing was less about the serpent, who in this version merely prods at a weakness already detected, and more about our inability to accept love and our continual self-delusion that if we feel alone we must, therefore, actually be alone. The darkness is not a woman’s burden, man the accidental sufferer of his mate, but instead a human condition. Eve is not the villain and Adam here has more page space and is more relevant. Even his darkness, his longing, his perception of aloneness in a world where he was anything but, leads to the creation of a helpmate like himself, whom he likewise rejects.

Regardless of whether or not you personally ascribe to Young’s creation vision – the meaning and the intent is unquestionable. We often lose God not because He has left us, but because we falsely perceive that we are alone. This aloneness can derive from many sources ranging from hubristic pride to the feeling of being unworthy – too spiritually ugly to ask for acceptance. Whatever the answer, Young makes us think, makes us cry, and ultimately makes us feel cradled in God’s grace, held like babies in his arms. For this reason alone, Eve is a successful book in that its more than a story – it’s an awakening, a call to realization of the goodness that surrounds us all.