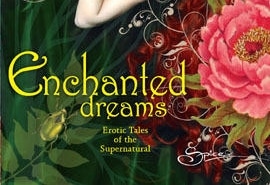 Returning to my occasional short story kick, and recalling my respect for Nancy Madore who ceaselessly collects contemporary erotica tailored for the common, shared fantasies of women, I decided to check out the very last book in the Enchanted trilogy. My intense bookworm OCD also refuses to allow me to rest until I have completed a series which, once started, should not be paused or abandoned. Enchanted Dreams: Erotic Tales of the Supernatural differs from the first two installments within the series, Enchanted and Enchanted Again, in that it does not use fairy tales as the basis for adult themed fantasies. This, in and of itself, plus the disturbing nature of the second edition in the series, should have been enough warning. The inclusion of “supernatural” should have also been a warning bell, although here I just envisioned the typical, sexy and misunderstood vampire.

The first of seven stories (making this a short and quick book) “The Enchanted Forest” starts the aura of strangeness and ends with a dark twist. It was here that I began to feel instantly torn between my general love of a good story (and writing) and the erotic promise of the narrative. Going to erotica, most readers aren’t expecting a particularly well-crafted tale, but one that titillates and entertains. It’s a genre that lends to easy forget-ability but Enchanted Dreams turns that particular expectation on its head. The story revolves around a stressed woman who goes on a wilderness hike to escape work and the compound issues in her life. Falling off a cliff, she awakens to another part of the woods, where the very flowers and the trees are semi-mobile entities that seek only to give her . . . ahem . . . fulfillment. As her pleasure mounts in this solitary paradise, she forgets the world and the worries that she left behind until one day she makes a discovery about her leafy home. The story itself is well structured, the ending a shocking twist. As a story, it works on all the right levels. As erotica, with the trees and flowers satisfying this wood-nymph like lady, it’s just weird – to put it kindly.

Following the “you’re not in for what you expected” semi bizzaro motif of the first story the second “Disenchantment” follows Maryanne, a woman who believes negatively that relationships are finite since men are only interested in the chase and lose interest in the woman once they find her. Dan, entranced by this down-to-earth, modern female, decides to prove her wrong, but will his wondering eye betray him? If it does, what will Maryanne do? Following a black widow theme of perverted feminism, the story ends with cannibalism as . . . female empowerment? It’s gross, brutal, shocking, and quite despicable in that it parades a horror story as erotica. False advertising people. False advertising.

Continuing in the same thread, each story has a sexual sheen on a dark tale, sometimes a true out-and-out horror story. The stories morph from a disturbed, suicidal woman sharpening her teeth in order to bite vampire to a psychiatrist who hypnotizes women to live out their husbands’ sexual fantasies. Each story is well written, well told, and as generic fiction is compelling. As erotica – it’s either false advertising or disturbing perversion. Your choice.

In the conclusion, each of the seven stories was well told, and from a bookworm’s perspective, interesting stories that pull readers in with convoluted plots, shameless secrets, and a penchant for backstabbing finales. As a horror short story collection, it’s interesting. As a collection of women’s erotica, it’s a collective insult and the epitome of false advertising. Caveat emptor.