Empire of Necessity, The

Revolt on the high seas… 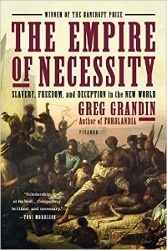 There was a lot of money to be made. For more than three centuries, traders generated enormous profits by transporting slaves from the African coast to the Americas and trading them for raw materials like cotton, sugar and rum, which could be exchanged for guns and other factory products back in Europe.  These items could then be used to buy more slaves in Africa, completing the triangle.  With every transaction, the profits went higher.  Traditional accounts of slavery in the US, while recognizing the horrors of the Middle Passage from Africa, tend to emphasize the tranquility of plantation life in the antebellum Southern states.  While whippings were required from time to time, the slaves knew their place and rarely raised a fuss.  But the reality was that slave rebellions were a constant threat any time Africans were given an opportunity to conspire.  Far from being helpless and passive victims, many slaves heroically  risked their lives as they repeatedly tried to regain their freedom.  Not surprisingly, these revolts were almost always efforts in futility and news of them was usually successfully suppressed.  However, one attempt off the coast of Chile eventually became famous and is the focus of Greg Grandin’s wide-ranging and well-told history of fate and violence in the South American slave trade, The Empire of Necessity. 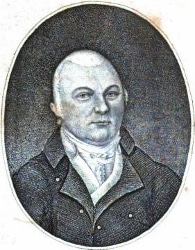 The unique aspect of this rebellion – one among countless others – is that it became the source story for an acclaimed novella by one of America’s most celebrated authors, Herman Melville. Benito Cereno, published in 1855, is based on the diary of Captain Amasa Delano, which tells of the American’s experience on board his New England-built sealing ship the Perseverance.  One morning in February, 1805 his ship came across the Tryal, flying no nation’s flag and drifting dangerously close to the rocky shores of a lonely islet off the coast of Chile.  After being invited onboard, Delano met the owner and captain of the ship, a Spaniard named Benito Cerreño, as well as two African slaves, Babo and his son Mori.  Apparently, the slave ship had been adrift for many days, food supplies were running low and there seemed to be a paucity of crew members on deck with numerous slaves wandering loose.  But everything, Cerreño assured Delano, was actually in proper order.  It was only upon leaving the ship nine hours later, after having organized a full restocking of food and water for his new acquaintances, that Delano realized that he’d been fooled.  Cerreño was actually being held hostage by Babo and the rest of the slaves on board, who had staged a revolt months earlier, killing most of the crew in the process. 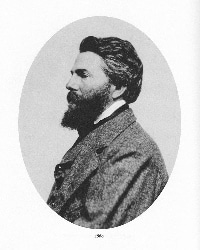 Melville changes some of the names and a few other small details, but his story follows Delano’s diary quite closely. Published in serial form as the abolitionist movement in America was gaining intensity, it was used by anti-slavery activists to help further their cause.  The work has gone on to be considered one of Melville’s finest.

But the novella only encompasses the climax of the story. Gathering up copious amounts of research, Grandin, a history professor at New York University, takes the reader further back in time to uncover where each character’s story began.  We learn of Delano’s repeated financial failings and unflagging moral rectitude.  Grandin also tells how of Babo and Mori – both devout Muslims – survived the arduous journey from western Africa to Montevideo in the belly of a fetid slave ship, followed by a death-defying overland trek to Santiago before boarding the Tryal. In chains the entire time.  He includes briefer accounts of Cerreño’s origins, as well as the backstory of the ships involved.  By the time he rewinds all these individual story lines Grandin has created a thoroughly fascinating saga that is a pleasure to read.

But the author goes even further, never hesitating to weave Melville into the narrative. He even includes an extensive history of the short-lived sealing industry that was dreadful in its scope and vileness, making me almost respect their more civilized whaling brethren, by comparison.

Remarkably bold in its scope, The Empire of Necessity is a successful and engaging history of the Spanish Empire’s appalling adventures in slavery.  Skillfully incorporating intriguing individual stories – heroic and otherwise – into the broader epic of the Atlantic slave trade, it provides interesting literary commentary and environmental perspectives, as well.  Recommended for anyone who enjoys good history writing.

Check out these other reviews of books about slavery in the Americas: