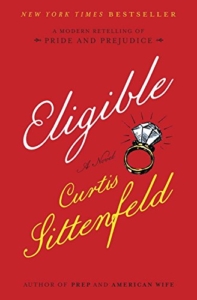 Liz Bennett in the Role of a Shock Jock

After the milieu of Pride and Prejudice themed movies from Masterpiece Theater to the latest (and greatest) Pride and Prejudice and Zombies blockbuster film, modern day audiences are showing some inordinate love for the feisty heroine first penned by the historically demure Jane Austen in 1813. Everyone knows the story – set against a backdrop of social politeness, etiquette, and sardonic piano-forte, heroine Elizabeth Bennet overcomes the stigma of a silly, money-grasping family to prove that marriage is about love – not money or social station.

For Austen’s time period, this entire idea was a tasteful shocker, a subtle stab at the fabric of a bijou society more concerned with status than emotion. A little bit of pre-feminism feminism classified Austen’s most popular work, presenting a strong female protagonist who attracts the attention of the main dashing male through her intellect and clever thwarting of the system. So, when the classic once again came around, in yet another form, and was recommended to me from both The Cozy Reader Club and Book of the Month, I had no other choice but to give in and get down with a dubious Austen retelling with the terrifying axiom of having been “modernized” appended to its stark cover.

In this rendition, all the subtleness of Austen’s heroine and the upstanding nature of Elizabeth (aka Liz) gets tarnished and trashed in the name of “shocking” modern issues. Here we have a swearing, running, hate-sex fueled heroine ashamed of racist, Shopping Channel addicted parents and yet defensive of her simple Cincinnati upbringing. An ardent New Yorker now, playing the mistress to a married man who has strung her along for ten plus years, the Liz Bennet we meet here is a complete disappointment. She’s weak and dissipated, easily pushed and influenced by those around her. The sterling character, willing to stand up for her beliefs and love of her family is absent. Instead, we have a frumpish “old-maid” type soaring from one quagmire relationship to another with only the briefest mooring in a tenuous plot.

[Jane’s] paramour who instigates the plot and all that social commentary in P&P) is actually a doctor with a yen for reality TV who spends more time on the Eligible show looking for fine figured females than he does actually working.  Jane’s main character trait is her idea to get artificially inseminated as she approaches forty, meanwhile doing some yoga stuff and hiding the shocking details of (a) her pregnancy and (b) how she got pregnant from her clueless parents.

The dashing Darcy is an uppity New Yorker who looks down on those Cincinnati folks. He’s also a brain surgeon and (following the original novel) the purveyor of doom for young love. He and Liz fumble through cluttered segments of inane dialogue and the entire love-hate chemistry that made Dracy and Liz such showstoppers is completely missing. Indeed, the couple’s hate is very low grade and their love even more questionable. Apathy, if anything, is the prevailing emotion as they lazily trundle together.

The remaining sisters (Kitty, Lydia, and Mary) are background pieces who shuffle around, navigating from rude social behavior and scatological comments to a pseudo-serious examination of the entire transgender issue. Another token “modern” approach that, along with all the other serious items, is sardonically displayed, mocked, and never properly addressed with any thoughtful intent either in the plot or in P&P’s traditional social commentary. It’s all just there to keep readers shocked, forgetting that Austen herself upended her characters and their expectations/outlooks with more subtle, and far better examined, incidents.

The main element of social class and distinction simply cannot be recreated in today’s America and the entire New York vs Cincinnati vibe falls flat. The narrative is trying too hard, cutting and pasting the basic Pride and Prejudice story, and following the original plot with a fair amount of dedication, but not appending any extra level of creativity that would take the force behind Austen’s call for social justice and use it for modern social enlightenment. Indeed, the gay jokes and transgender side-story backtracks on current ideas of tolerance and acceptance instead of actually furthering discourse, positively or negatively, in any constructive or meaningful way. Instead, Eligible is more akin to Quirk Classic’s Pride and Prejudice and Zombies book (which came long before the movie) then Austen’s original tale. Its mockery, indeed, but the problem is that Eligible doesn’t realize that its nothing more than a slightly amusing, disrespectful tribute. Sittenfeld, instead, seems completely devoted to actually creating a “modern retelling.”

Why the three stars then? Well, I’ve gone through and lambasted Eligible as the second-rate glory hog that it is, riding the tale coat of a classic, yet as far as reading enjoyment, the novel had its . . . entertaining moments. Each chapter was short, sweet, and to the point, creating an oddly appealing soap-operaish vibe. I knew, intellectually, that I should hate Eligible, as anyone who spent an entire year in college doing a thesis on Jane Austen and social change as a graduating thesis assignment should; but hey, this endearing little train wreck was kind of enjoyable. In the manner of junk-food fiction, I kept coming back even though I knew that I wasn’t getting anything particularly nourishing from the experience.

The narrative flowed easily and was fast and, despite the discordant weirdness between this world and the high culture of Austen’s P&P, recognizable as the traditional Liz and Darcy drama. The storyline is still essentially the same (boy meets girl, boy hates girl, boy decides he wants girl, girl doesn’t want boy . . . etc.) The laughably obscene nature of the narrative with its “see Liz is so shocking she does hate sex vibe” has the quality of any really bad B-movie – you get into it and just want to keep watching. There’s nothing demanding or difficult here, just some addictive silliness to sink your teeth into and an overarching “how bad can this get” question that just makes it all oddly light-hearted and fun. As a matter of fact, at the half way mark I decided to divorce the novel from Pride and Prejudice in my mind and just see it as its own, separate entity: a quirky little story with some weird characters and a gossipy vibe that while tasteless had a certain can’t-put-this-silly-story down ambiance. When I stopped trying to compare the classic to the modern, I was better able to flow with and enjoy the story. It’s no lasting tribute, but it certainly has an entertaining, beach read quality that is soothing to readers in the tradition of the very best junk-food – not lasting, but a tasty little guilty pleasure.