Einstein and the Quantum 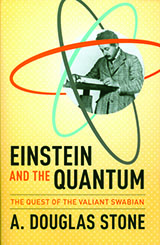 While Albert Einstein is popularly regarded as the undisputed “greatest scientist of all time”, his undeniably brilliant legacy is tainted by the fact that later in his life he was vocally opposed to the modern formulation of quantum physics.  The 1921 Nobelist’s oft quoted opinion that God is not “playing at dice” – as well as his fame for the unrelated theory of general relativity and E=mc² – has obscured the fact that he played a pivotal role in the birth of quantum theory.  While he was ascending into the scientific superstar stratosphere during the two decades following his abrupt appearance in 1905, he was at the center of the quantum revolution that was destined to overturn the world of classical physics.  In Einstein and the Quantum, Yale professor A. Douglas Stone tells the birth story of modern quantum physics and the violin playing phenomenon who started it all.

Starting with the story of an impudent teenager who taught himself calculus, Stone tells of Einstein’s early struggles in the schools and his relegation to a Swiss patent office following his graduation from Zurich Polytechnic in 1900 at the age of 21.  But much of the book focuses on the events of 1905 – known as Einstein’s annus mirabilis – when the prodigy burst on the scene and laid the groundwork for the quantum revolution in physics.  Arguing that light was simultaneously a particle and a wave, Einstein revealed the very first inklings of the strange and counterintuitive workings of the physical world at the smallest scale. 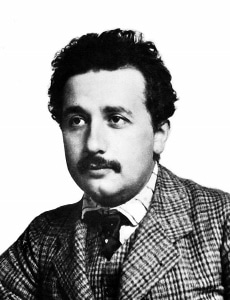 A 1904 photograph of a 25 year-old Swiss patent office employee.

Stone only briefly touches on general relativity – the discovery that made Einstein most famous – and instead delves into the largely collective effort that created modern quantum physics, featuring the young upstart in the center of it all.  The author doesn’t hesitate to get his hands dirty, digging deeply into the equations and dizzying concepts that were so painstakingly crafted by Einstein and his colleagues from around the globe.  Rather than present these ideas as fully formed gifts that were simply handed down from an ivory tower, Stone makes it clear that this collaborative process was full of struggles, dead ends and failed ideas.  That Einstein was never able to accept the full extent of the quantum revolution is convincing evidence of the challenging terrain. 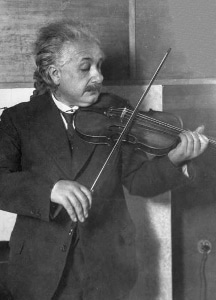 Einstein playing his violin, circa 1920.

Unfortunately, this reader – I’m not a quantum physicist or any sort of mathematical genius, but I’ve read a lot of physics books over the years – found all the math overwhelming at times.  While I learned some new things about quantum physics, I usually felt that Professor Stone was talking over my head.  While readers with an extensive background in modern physics will do just fine, I expect that most general readers will struggle when the author dives into the depths of topics like black box radiation and the entropy of Planck’s resonators.

An interesting account of Einstein’s role in the birth of modern physics, Einstein and the Quantum revels in the almost instinctual brilliance of the great man and successfully captures the drama and excitement that surrounded this revolutionary reworking of the world at the atomic level.  However, Stone doesn’t wait for stragglers and his detailed and demanding approach to the topic will make this a tough read for most general readers.  Once he’s done perfecting string theory, I’m sure that Sheldon Cooper will find the book well worth reading.  Everybody else, maybe not so much.