Egg and I, The 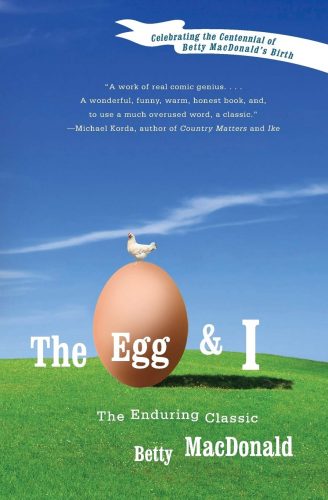 Memoirs of a Chicken Farmer’s Wife

Following in the footsteps of her mother, Betty MacDonald marries and allows her new mate to lead the way. His passions are her orders, his desires, her daily chores. This leads Betty far away from her former, comfortable town life into the wilderness of Washington State where the daily toils of chicken farming, eccentric neighbors, and the occasional cougar keep life interesting.

Betty’s famous memoir, The Egg and I, starts with the sarcastic explanation of Betty’s path from city woman to chicken farmer, helpmate, and general woman of the wild. Betty’s new life is centered around a house with no water, no electricity, and several hundred chickens, as well as a husband who thinks a woman can easily step into his work, whether that be erecting a new building or holding the forte while wild animals are prowling on the loose. It’s meant to be fun, sarcastic, tongue-and-cheek, yet modern audiences cannot miss the evident spousal abuse, and the memoir takes on a far darker turn than the author ever expected or anticipated.

While Betty’s sarcasm is wide ranging, lighting on her neighbors, her friends, and everyone else around her (the repeated racism towards Native Americans is poorly apologized for in an awkward Forward by Betty’s daughters), Betty rarely calls her husband out. His desire for her to do the impossible – and the dangers he constantly exposes his wife and children to – are tackled as the normal workings of marriage, an attempt at a lighthearted “he said,” “she said,” “men are from Mars and women are from Venus” comedy. The fact that Betty, who is willing to criticize pretty much everyone and everything, right down to the less than intelligent baby chicks (whose constant accidental drownings she finds disturbingly amusing) fails to call her husband out for his misdeeds is telling. Indeed, his mentions are periphery, and he is never spoken of in a truly questioning or faintly accusatory light.

It’s hard to empathize with Betty. Partially this is due to her lack of concern for the farm animals. For example, she hates the baby chicks and finds their deaths hilarious. Even more so, her general dislike of any human in her path and outright jealousy and hatred towards Native Americans makes readers pretty instantly inured to the tragedies in her own life. Taunts of “good enough for you” echo in the back of our minds. Perhaps her judgment is a camouflage for pain and disappointment in a bad life. Still. Betty obviously thinks that she is better than everyone else.

What redeems the memoir, however, is the Kettles, the eccentric, sometimes adorable, always lazy next door neighbors. While Betty could occasionally be entertaining, even amusing, the Kettles were always a joy, and I made it chapter to chapter just to spend a moment with them. When the memoir abruptly ended, I longed for more of the Kettles. These are the people who should have been the focus, the characters who despite their flaws (which are very many) resonate with the reader and call on our hearts while hitting on our funny bones.

Overall, The Egg and I is just ok. Certainly not as funny as it promised to be and definitely far darker than expected. Betty’s horrible, abusive marriage and her racism take the book away from that “innocent classic laugh” that I was expecting. I’m not sure where I fall on this – I recommend it for a moment with the Kettles, but there are far better, more joyful memoires out there that are consistently funny and remarkably less bitter and bubbling with barely concealed schadenfreude.