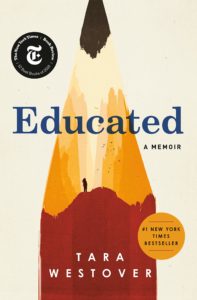 Educated: A Memoir of Abuse and Overcoming

I’ve seen Educated’s distinctive cover working its way across bookstores and Amazon recommendations for a while, yet when my book club chose this as one of our next reads, I rapidly discovered that I didn’t know what it was about or what to expect from it. I only knew that it was non-fiction.

Educated covers Tara Westover’s traumatic experience growing up with mentally unstable, fundamentalist Mormon parents who are convinced that doomsday is upon us, the system will soon disintegrate, and a head-for-the-hills pack must always be ready. In this world, Tara was taught how to use herbal healing and work in her father’s increasingly dangerous scrap yard. Yet, as she watches one of her older, more rebellious brothers find release in knowledge and the soaring music from his boombox, she starts to wonder if maybe there is more to life than preparing for the end and being an obedient Mormon wife someday.

Her slow attempt to escape is thwarted by more than just her parents; as her mental world gets bigger her physical options get smaller and the abuse of her elder brother intensifies along with the family’s generally bad fortune and a string of bizarre accidents that slowly hollow out everything she has known. She can stay and slowly die, or she can leave who she is and everything she has ever known for a new type of life with college being the first, painful step. 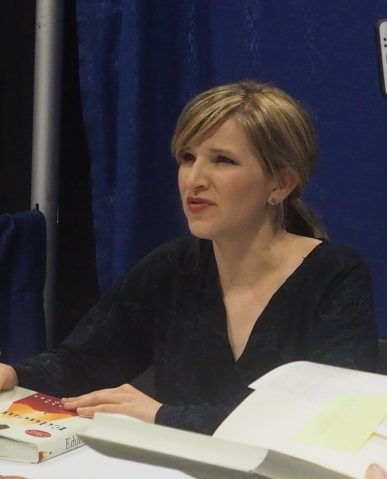 Educated is a good book, with all the juicy titillation of being a real person’s story of trying and overcoming. Yet something here reminds me of A Million Little Pieces, taunted by Oprah and popular because of its “real” story of a recovering addict’s experiences. Of course, we all know that A Million Little Pieces was later outed as pure fiction. While Educated has quality, voice, verve, and intense wisdom and understanding of everything from the trauma of escaping an abusive family to the terror of taking the path less worn (at least in your own neck of the woods) some of the elements are fantastical. It’s entirely possible they did all happen, but something sits at my shoulder, shakes its head, and says “look, look at the holes.” And, to me, there are many.

Tara’s life goes from a slightly strange childhood to pure horror as she starts to come of age. Not allowed to go to school, indeed, so far out of the system she doesn’t have a birth certificate, Tara starts to recount the weird recklessness of her mentally unstable father. It begins when her mother suffers intense brain damage from the first of many car accidents and, true to her father’s beliefs (it is never clear if this is a pure Mormon tenant or another of her father’s add-ons), no one goes to the hospital or seeks medical aid. Instead the family relies on essential oils and something called finger clicking, and while Tara’s mother never is the same, a period of intense migraines end and she survives. Ok – it could happen. But then this string of extreme accidents continues. At one-point Tara’s brother Shawn (more on him later) has a motorcycle accident that leaves his brain literally visible. Yet, he too, survives sans medical intervention. This isn’t even the most unusual of the medical near-misses that makes us question the book, alongside Tara’s own admitted inability to remember occurrences the same as her other siblings, all of whom recall key accidents with different details and in different ways. Hmmmm.

For most of the book, Tara appears to be the only girl in huge circle of male siblings. Yet, at the end, a never before mentioned sister emerges to play a key part. Perhaps, in the hubbub of introduction and the clamor of memories and focus on more pertinent siblings, this older sister got left behind or I missed her introduction. Yet . . .

Likewise, Tara goes from never having any schooling to teaching herself everything from old library books and sheer stubbornness. She has no tutor, no one to ask, and yet she aces her tests and is accepted into college. Her story is that she was homeschooled, and this is rolled on through. Yet, I was homeschooled from first grade through high school and after taking the ACTs, I still had to provide proof of my home schooling, my high school degree, and documents about the tests I had had throughout home school, grade by grade by grade. Yet Tara simply lies and this is accepted and she progresses from Bringham Young University all the way to Harvard and Cambridge. A girl with no formal education until she is 17 who suddenly launches herself and becomes a PhD. A school system that never demands documentation or proof of her home schooling. The strange thing here too is despite all this self-study, she enters college unaware of the holocaust and manages to embarrass herself In front of a classroom of her peers, yet with very little trouble manages to become a stellar student Its rags to riches, too good to be true, and too under explained to be fully believable. I’m not even mentioning the magical money that must be flowing in the background – somehow, somewhere – to jet her to Cambridge and back. 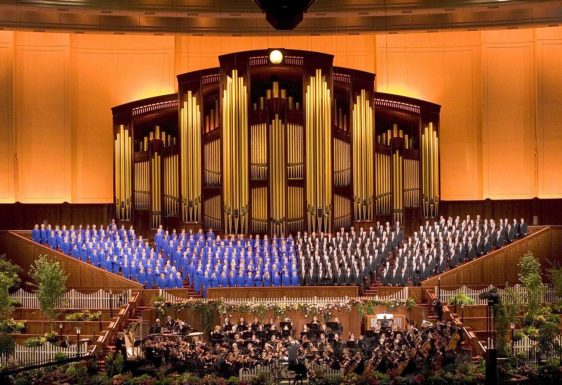 The Mormon Tabernacle Choir which inspired young Tara and her brother.

It’s possible, of course, that it is all true and there are explanations, fantastical but believable. Yet, we never get them and the book skims selectively over these dark areas of doubt, the pace accelerating and information being left behind more rapidly as Tara emerges from her hometown to college and beyond.

Nevertheless, Educated is believable when it talks about the emotional connection, essentially Stockholm syndrome, exhibited between Tara and her older brother Shawn. Before the horror, the author chooses to share a memory with us. A long-haul truck drive with Shawn and Tara, playing word games and eating greasy fast food and bonding in the truck’s cabin through the long miles. Here we see the good side of Shawn, and here Westover successfully balances what is to come. Indeed, the entire narrative is kind, longing almost, with Westover sending all judgment to herself instead of the family that ultimately lets her down and betrays her. She never disowns her heritage, merely moves on. Yet there is, and always will be, pain – over the good side of Shawn that, despite the beatings and the verbal abuse, arises to save her from dangerous situations; the quiet rebellion of her mother, who is ultimately treacherous; and the genuine nature of her father whose rhetoric is inspired by fear, a desire to be important, and deep seated mental issues that he tries to hide behind religion and authority. This is where the story, true or not, rings true. The emotions of the disconnected longing for family combined with the outcast status, by choices that were forced, showcases a decision to choose survival over fitting in and the inevitable wakefulness that reveals a reality that can never be denied again and therefore, never lived with again. We may wonder about the details, even question them openly, yet it is evident that the author does understand abuse and how the abused never can quite let go the sense of fault, the worthlessness even when away from the abusers. For this, if nothing else, the narrative is moving. For the rest, believability questions aside, the writing is forceful and the story well told, compelling even. Doubts or otherwise, readers will want to keep perusing Westover’s memoir to the bitter end, and our attention will never waver, even if we not-so-secretly maintain suspicions.