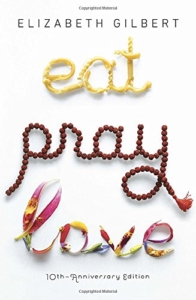 An iconic spiritual/self-discovery memoir, Eat, Pray, Love has become a cultural touchstone making appearances in everything from common satire to the very real plight of modern women in an evolving and often confusing world. Elizabeth Gilbert documents what are her admittedly first-world problems. She has a house, a loving husband, a good job, and they are planning to soon have children and fulfill the overarching American dream. Why then is she spending every night in tears and borderline panic attacks, couched on her beautifully tiled bathroom floor, imploring some unknown universal entity to explain her fear and misery? Gilbert doesn’t know what she wants, but she knows that what she has, this supposed fairytale idea of marriage and kids, is not what she wants. And so she leaves, beginning a bitter divorce which will last years, plummeting into depression and an on-again-off-again relationship with a new man who might be her soul mate or might be the end of her self-esteem. Presented with unlimited finances and free time by her understanding publisher, Gilbert seeks herself through travel, agreeing to share her story in a memoir.

And so begins Eat, Pray, Love as Gilbert first seeks pleasure (and oddly chastity) in Italy, spirituality in India, and balance in Indonesia. Splicing together the best-of elements of each culture, Gilbert makes the ultimate New Age mélange of spirituality and self-fulfillment, predictably finding love by the conclusion.

Tourism turned voyeurism, living off the “quaint” aspects of other cultures, cherry picking from deep spiritual beliefs and traditions without ever adopting the entire package, Gilbert is a protagonist readers will either love or hate. It’s all there in the mixed criticism of the book with some reviewers raving about the potential for self-exploration and the examination of the modern “we don’t really know what we want” plight while others angrily slam the book closed, railing against the privileged whining of a spoiled woman with unlimited finances and negligible real-life responsibilities. The truth is actually somewhere in the middle, although even the most stalwart, determined reader will admit that ultimately emotions win and you either respect and sympathize with Gilbert or you don’t.

Part of the issue which causes such extreme actions is Gilbert’s reticence, which she tries to represent as respect for the privacy of others, namely her ex-husband. We see Gilbert with the ideal life (seemingly) and a good man and so it’s difficult from the beginning to empathize, especially when she backs up our presumptions of her villainy by openly admitting it – stating she was selfish (but there it was) and that she felt guilty for hurting him. Surely, there is more complexity than her sudden desire for a more interesting, less stayed life? Surely the relationship had other issues, other flaws. But we don’t see these and Gilbert sidesteps them all with one sentence, saying her time with her husband remains her secret and that she will not reveal the good or the bad of him. Ok – but now readers are wary. Are you respecting the privacy of someone you once loved or are you simply holding out? We’re asked to abandon everything with Gilbert and open ourselves to this journey, but automatically as a reader I had trust issues. Why is she inviting me on a spiritual journey, a seeking of self, but refusing to trust me and open up about her marriage issues – the catalyst for everything that happens in her life going forward (and consequentially everything in this memoir.)

And so Gilbert starts off holding her audience at a distance making a connection difficult. She has the “poor little rich girl vibe” further compounded by an immediate love-affair within a few months of leaving her husband and a somewhat bragging confession that from an early age getting and acquiring romance was easy – men trip over themselves for her and consequentially, she doesn’t know how to be alone. It’s difficult to sympathize with a woman who is beset by being too popular, too loved, and having too many opportunities. Dare I even say, her self-identity issues reflect self-absorbed privilege and a lack of discipline. Her publisher bails her out of her existential crises with an all-expenses paid, seemingly unlimited amount of time off to travel and gain an insight into what she truly wants from life. With this sort of vacation from life and an unlimited retinue of people, all friends and potential conquests all of whom are magnetized by her “irresistible” personality, the quest for understanding is so far removed from the ordinary experience as to severely limit readers’ ability to travel the same dusty paths. We cannot get into the true flow of Gilbert’s sorrows or joys because this seems more like an unusually rose-tinted adaptation of Sex in the City than actual life. Stigmas are mental perceptions deriving from self-indulgent introspection and despite Gilbert’s woe betide laments, its evident that lady luck is her best-friend.

Of course – Eat, Pray, Love never claimed to be anything else and Gilbert is upfront about her own interior indulgence and her ability to live this dream to the full with some epic, money-is-no-object traveling. What do you expect of a memoir, especially one that makes no bones about it from chapter one that this journey focuses on the interior issues (and selfish small things) that we are all ashamed to admit and indulge. It’s hard to bash a book for being nothing more and nothing less than what it told you it was going to be. It’s a memoir. This doesn’t necessarily make me want to rush out and become best friends with Gilbert, but it also tampers with ome of my judgment and, admitted, jealousy. This isn’t my story and this isn’t the every-man/woman story. It didn’t claim to be universal and it didn’t claim to be deep or wise. When you expect blood from a turnip, you will invariably be disappointed, as I indeed was.

What Gilbert may lack in personal appeal, she does make up in an advanced understanding and manipulation of language itself, which is breathtaking. Add into this the audio version, which Gilbert reads herself in the most perfectly modulated and confidential tones, and you have a book that regardless of your personal reactions is a quality product. Imagine how much greater this would be if Gilbert didn’t hold back in the most personal aspects (which sort of defies the ultimate point of a reveal-all memoir) and gives readers a good reason to criticize that turnip.

Ultimately, however, despite the vivid language and Gilbert’s expert reading, Eat, Pray, Love is only enjoyable if you like and empathize with the narrator. This makes the entire book subject to extreme subjectivity and has led to the “I love it” and “I hate it” accolades and rants. In the end, I personally found Gilbert not to be very serious, casually touring through ancient cultures and picking out the bits she likes, indulging morose thoughts, complaining with excessive melodrama that the idyllic luxury of her life is not fulfilling enough, despite the plight of the world around her, including the poor of the countries she so serenely tours through. Her self-love, as evidenced through her writing journal entries to herself, claiming true love and patience for her personal needs, further put me off and made Gilbert seem either unhinged or very immature. It’s not for me to say whether or not you, dear reader, will like the book or garner some wisdom from it. I can, however, warn that your feelings will most likely be strong since this memoir is trying not to entertain so much as win advocates based on the author’s personal merits and perceived troubles.