Eat Only When You’re Hungry 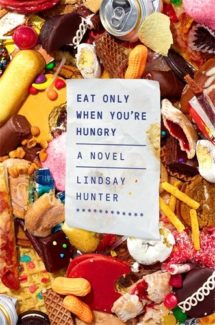 In a land of self-indulgence, instant gratification, the temptations of sleazy bars and dark strip clubs, and the ability to effortlessly “unfriend” family from our lives, Lindsay Hunter examines a doomed father and son relationship and the generational domino effect of failure. Greg, obese, divorced, hopelessly addicted to greasy roadside food (ala KFC and Taco Bell), and used to being the wild man in his admittedly dissatisfying youth, is searching for his crack addict son, one aptly named Greg Junior (or GJ). A man with the hubris to create a son in a like image and bestow him with the same name sees no irony, or even more chillingly no reflection, as his son degenerates in a fast paced world of always getting what you want – for the right price that is. Taught to act like a man, drink like a man, and frequent the strip clubs like his old man, GJ’s itch for a fix has easily become Greg’s repository for disappointment and the resentment of aging. On an odyssey that is more flight than search, Greg’s time in the sticky upholstery of an increasingly dilapidating RV filled with take-out sacks full of cold burgers and the smell of clammy sweat becomes an unwitting and unwanted series of dead-end revelations and inescapable regrets.

Eat Only When You’re Hungry is a tragic story that hits close to home. Greg is an everyman – nothing about him is exceptional or particularly out of the ordinary. He has his vices like many and his slips of judgement, most of which are centered around the lure of food or drowning failure in booze. As Greg travels away from his unusually understanding second wife on a search and rescue mission he seems to want to fail, it slowly becomes apparent that Greg is a bad husband, bad father, and even bad son himself. Bouncing from his ex-wife’s home to his father’s apartment to dive bars in search of his son, Greg is now living the after effects of fleeing difficulty or drowning sorrow. He’s old enough now that everything is coming home to roost including the impacts of his decisions, from a strange need/hate relationship with his ex-wife to his general laziness as a father and central figure in others’ lives. Greg’s health is a landslide of accumulated bad decisions, his weight a constant burden to him that oozes over the page space and gives readers aches and pains, a sense of unease in our own bodies as Greg literally becomes his own prison. His physical discomfort is a very real manifestation of his internal discomfort and with his body, now uncooperative and different, he has no true direction for the angst that is growing from vagueness into outright depression. 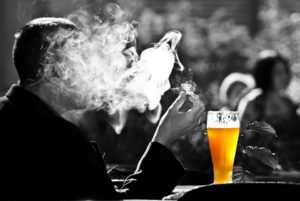 The story of the rarely seen GJ and his slide into hard drug addiction is not truly the focus: Greg, with his seemingly average life with all the expected dysfunctions and socially acceptable vices – strip clubs, fast food, and failed marriages included – is an addict too, forcing readers to look at the more subtle forms of addiction that are all around us. Greg’s example, or lack thereof, is the true focus and while resolution for such a lost character isn’t in the cards, introspection and warnings are.

Hunter, however, is never heavy handed and while the story has a moral – and a discomfiting one at that – the elegance of the telling and the way we feel everything from the exhaustion of handling an addiction to the comfortingly sticky leather of the RV is what makes everything so vivid. We feel the revulsion along with the attraction, the disheveled messy life of cars crammed with old take-out bags right along with the gut churning desire for just one more greasy jaunt into that forbidden food. We feel the desire to give up and take the easy, restful slide as averse to the nagging feeling of guilt besieged by a voice, ever more quiet, begging us to do something for God’s sake. Hunter combines all of these, all of these warring feelings which are both familiar and infinitely terrifying, and somehow weaves them into the backdrop of a tale that on the surface at least, is a sleeper. Amplified by imagery that gets under your skin and a way with words that transfers the mundane into something with sublime meaning and aching regret, Eat Only When You’re Hungry is a novel that sneaks up on you, just like the lifetime of bad choices and “just one more day” decisions. With Greg, we feel both loathing and an odd sympathy because in the end, while he isn’t much, he is more truly us than we are comfortable with admitting and his slow degeneration is only a stark highlight of our own chosen path.