Driving with the Top Down 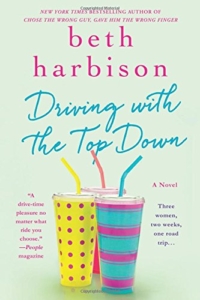 A kumbaya style Hallmark beach read to melt your  brain

A pastel colored, bring-me-to-the-beach softcover with promises of female comradery, secrets, and road-trips, Driving with the Top Down promises an introspective journey through three secretly broken women as fate throws them together during a two week driving-trip. A sprightly beginning shows each woman in the light of a fairy-tale princess living the Martha Stewart dream, only to be shattered by the insecurities and secrets of the women’s real lives. Colleen Bradley is a married antique collecting, do-it-yourself crafter with a successful business and a seemingly ideal life. The truth, however, is a haunting recollection and the gut-sinking surety that she is not her husband’s first choice. Indeed, the glue that has held their relationship together maybe more about an unexpected pregnancy than love and happily-ever-after. Determined to finally confront her fear, Colleen sets out, ostensibly to gather more antiques and junk-stop finds during a solitary two week road-trip. What she’s really seeking, however, is far more costly and much more elusive.

Along the way, our brooding heroine ends up with a teenage charge, the outlaw daughter of Collen’s inept brother-in-law. Tamara is the typical teenager armed with a retune of rolling-eyes, what-evers, and the reputation of being a burnt out wild child. What she’s really starving for, however, aren’t the drugged out parties and mindless sex with her bum boyfriend, but true understanding and love.

Slammed together, both working through interior issues of want and neglect, two becomes three when a sudden stop leads to the discovery of Colleen’s long-lost college best-friend, the austerely named Bitty Nolan Camalier. This pencil thin socialite far-from home is stranded when her car gets stolen, and regretfully ends up tagging along with Colleen. What no one suspects is that Bitty is preparing for her own suicide after a disastrous marriage.

With a penchant for romanticized pre-destination, life-long problems and relationship issues are tackled adroitly, after some on-the-road bickering and misunderstandings clouded with dreamy flashbacks. In the end, each broken soul is granted just what they need, flowing into a happily-ever-after sunset of strong female friendship, hope, and the American way… Ok, ok, I got a little sarcastic there. The inevitability of the clichéd problems and the metaphoric strength of female friendship and the ability to essentially mind-meld with each other produces a soppy set of heroines with anticlimactic, typical problems that would perfectly fit in the column of a woman’s magazine. Fortunately, life-long issues, a car ride, and some old junk turned into treasure are enough to fix any major life issue, and within a torpidly plodding four hundred pages, all is resolved and everyone is happily-ever-after, throw your overly peppy beach-book into the roaring surf while getting carried away by a round of kumbaya.

I first discovered this book, and its seemingly A-list author via LitCube, a subscription box that brings books and goodies to your door. I thought this was a good way to encounter new authors and books and explore a little outside of my normal genres (mystery and drama namely with the occasional horror tome thrown in for good measure.) Labeled as contemporary women’s fiction (a nice term for the traditional “chick lit”), Driving with the Top Down had the possibility of being a J. Courtney Sullivan like book (the author who wrote Maine) or perhaps a Sophia Kinsella (Shopaholic)  like, relatable depiction of the female struggle for love, success, and understanding. Instead, Harbison offers a trite rendition which is almost satire in how perfectly it manages to emulate what a clichéd formula for “women’s lit” would look like if it were boiled down into a template for just-starting out authors.

We have everything from the misunderstood teenager really seeking a strong mother figure to an older woman seeking sexual fulfillment, easily and graphically granted to get that whole “sex scene” off the checklist.  People don’t act like people, but like caricatures. Ex-girlfriends are patient and understanding, going out of their way to make the current squeeze feel wanted and desired by the man. Long lost friends instantly connect and show a depth of understanding and desire for one another’s happiness that goes beyond mere human kindness, creating superstars of virtue. Likewise, long lost boyfriends are conveniently still available and pining twenty years later, and second changes for drugged out teens are easily given and even more easily understood and accepted, making these the most perfect (and therefore perfectly annoying) flawed protagonists. There is nothing human here, but instead a sugar-and-gumdrops, all that is sweet and sappy, please run this as a movie on the Hallmark channel base formula that ultimately never goes beyond its own small equation.

I tried to like Driving with the Top Down, I patiently read through its four hundred pages and stared at the glossy, highly colorful jacket with hope and the desire to “get” it (and therefore get some bang for my buck on my first non-Book of the Month book-box subscription.) Reviews are insanely positive as are ratings for Harbison in general.  After finishing the book, I left it in the free-library in my condo’s laundry room, noticing that while many of my other offerings stayed and gathered dust, it was snatched from the shelf by some excited bookworm later that day. I, however, remain puzzled. I don’t “get” it and probably never will. The novel tires so hard for cute and kitchy female bonding spliced with adventure and real-life grit, but in the end, it read more like a screen play where no one ever put the soul of the characters into the ongoing tale. By the conclusion, everything is handed back to us, too perfectly, with its pristine little bow, all tied up and happily ever after, and I grimaced that not once during all of those pages did I feel tension or connection. A so-so rubber stamp, like so many others, nothing stands out here, except perhaps the crystalline blandness that stretches from sentence style to emotive reasoning.