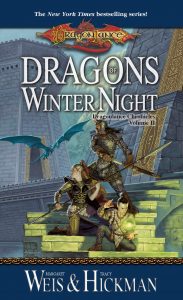 The Dragon Armies are continuing to mass across Krynn. It has been months since the companions saw the disappearance of the stars that mark the coming of the Queen of Darkness and the champion that seeks to stop her. Since then, they have been biding their time in Thorbardin, staying briefly with the dwarves and refugees from Pax Tharkas before once again going out into the world, trying to stop the rising tide of evil.

In Dragons of Winter Night the saga begun in Dragons of Autumn Twilight settles into an intermission only to once again escalate the action with the death of a central character and the final entrance into a desperate war. This book has an air of before-the-storm to it that is melancholy, as all the characters face their fears for the war, its dire outcome, and the sacrifices it will inevitably demand. With the entrance of a haunted land and Lorac’s nightmare (my personal favorite moment in the entire Chronicles trilogy), our beleaguered companions are forced to deal with both their mortality and their own moral frailty. It’s a prophetic moment, one that mixes foreshadowing with the kind of emotions that have even the most stoic readers scrambling for a tissue and gasping in shock. And that’s only the beginning.

While the first book was the beginning of the horror, Dragons of Winter Night is the dark night of the soul. There is, of course the fight between the Queen of Darkness and Krynn, but there is also a focus on the character’s internal and social struggles. Tanis comes face-to-face with the disparity between his human and elven sides as he struggles to choose between the charming, albeit evil Kit or Laurana, the besotted elf maiden who, in this offering, grows into herself and becomes a beloved, strong character. Tas continues to struggle with his role and the choices that will ultimately come to him. Strum’s secret is exposed, as is the fighting in the ranks of the knighthood and what the Knights of Solamnia have devolved into. The races of Krynn, used to their isolationism, do not rise to fight the dragon armies together. Instead, they enter into a destroying pettiness, allowing ancient prejudices and misconceptions to destroy any chance of cohesion or hope. New characters enter the mix and enrich the group’s dynamic and their understanding of the world around them. It’s a heady mix, often painful, poignant, and at times shattering. Weis and Hickman make decisions here that change everything, including the characters we have grown to love and respect. The authors do not take the easy road. They represent people (and mythical creatures) that we have come to love as fallible, sometimes noble, sometimes weak, always afraid and confused by their own pasts and built-in prejudices and presumptions.

The narrative matures further as the characters do, leading to one of the most memorable conclusions in the Chronicles trilogy, setting readers up for an explosive, take-no-prisoners sort of finale. The experiences along the way set up new options for our characters going forward as well, including the introduction of dragon orbs and the legends of Huma’s silver dragon. The pictures painted, the scenes that run through our minds as we read, are most powerful in this in-between book of the series, and by the time the reader finishes, it is impossible to remain detached and unemotional. The pages fly by and the setups for good and evil promise more adventure and heartache. After returning to this series a good ten years later, I’m happy to find that the story still sings, the characters with all their faults and imperfections still grab my heart and demand empathy, and the creativity and scope of the world remains just as fantastical and fascinating as the first time I delved into these pages. Sometimes the magic of a first read can be recaptured, a much loved story returned to again and again. This is one such story.