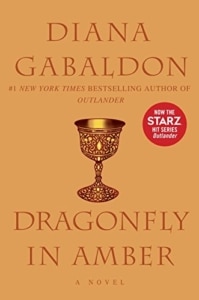 Crashing to earth, the second book in the ever-popular Outlander series begins with a time reversal mystery. No longer in the days of long lost lore, Claire is back in the 20th century, older and sadder with a shrouded history. Returning to Scotland after the recent death of her first-husband, Frank, Claire reaches out to Reverend Reginald’s adopted son, Roger. Old promises are fulfilled and binding oaths laid to rest and now, after twenty years away, Claire has the freedom to unveil her web of lies to her fiery haired American daughter, Brianna. Only Roger, and the dubious nature of his own heritage, are enough to unearth and prove a past soaked in secrets, intrigue, war, and finally, sacrifice.  It might just be, however, that history itself has some surprises for Claire.

Starting in the middle of an evidently new situation, readers are jolted to realize that our enterprising and wild Claire is no longer in the world of outlaw Scotland but back in a daily existence of catching trains and reading newspapers. Is this a dream or more accurately, some sort of nightmare? As it goes on, our own discomfort and fear grows out of bounds and the mystery is set. Where is Jamie? Why has Claire, evidentially returning to Scotland after two decades away and a reignited marriage with Frank, sadly embracing the modern world she forsook for love?

Starting with the inevitable tension of loss, Dragonfly in Amber, runs the threads of time parallel, letting us watch modern day (well, 1968) Claire sadly search for secrets in the dust while ancient Claire’s timeline picks-up with Jamie and further schemes to thwart Bonnie Prince Charlie and the ensuing massacre at Colloden.

Despite the hefty pages (close to 800), it takes the entire book to unravel the mystery of why Jamie and Claire are no longer together and the identity of Brianna. The slowness of the reveal, a risky strategy in any very long story, actually works and manages to keep readers tensely asking questions (and fearing the worst) right until the predictable, albeit emotionally devastating conclusion.

With more sadness this time around and less steamy sensuality, Dragonfly in Amber still builds the love story but as Claire and Jamie attempt to take on the Jacobites and infiltrate the Parisian courts of Prince Charlie some of the harsher elements of life mar the epic perfectness of their formerly selfless love. While both love unequivocally, sometimes melodramatically, both experience devastating disappointments, misunderstandings, and even betrayals at the hands of the other. If Outlander was a dreamy-eyed read that left you wanting to light candles and play Barry White, Dragonfly in Amber is a heartbreaking Kleenex fest that highlights the excruciating melancholy of grand love. Sometimes you want to reach into the narrative and slap the characters, yell at them, or beg them to come through, not quite as monstrous as their seeming actions portray them. Along the way the Jacobean plot thickens yet marital strife and difficulties such as pregnancy, miscarriage, infidelity, and potential murder put a strain on what morphs into a more mature, albeit bittersweet, relationship. In other words, just douse those candles and turn old Barry off.

Sometimes the novel goes too far. Even Outlander did to a degree but its underlying tone of some happiness in the strife kept the emotional rollercoaster just stable enough to get readers fully into the moment without carving our hearts out. This time, however, Gabaldon has the knife ready and there is no way you can protect your emotions or, frankly, the occasional scoff at just how grandly everything gets messed up.

We also spend a little too much time in French court, nosing around in court gossip and intrigue when readers just want to know what happened to Jamie already and why is Claire back in the 20th century! Also, who the heck is this baby Brianna?  The French influence section has the weighty feel of page filler and the actual intrigue against Bonnie Prince Charlie is weakly ascribed. Claire and Jamie are more playing it off-the-cuff and sometimes this makes the story lull. If the historical aspect, however, is a bit slower than the action packed Jamie related adventures readers are used to, the entire personal realm of their relationship has more than enough conflicts to keep the narrative hopping.

In the end, we have the setup for another sequel and although absolutely sad all the way through, there is a strange glimmer of hope (or perhaps that’s what I want to see.) Readers want the book to continue, despite the hefty page count, because the resolution we want, no demand, is at a juncture and we don’t know which way Claire will choose, or even if there is a choice at this point. Already, we are gathering our collective Kleenexes and comfort foods, ready to dive into the next adventure and either sooth our hearts or tear them apart even more. At this point, my addiction is obvious and while nothing beats the first book in the series, the no-punches-pulled, she-went-there drama is more than enough to keep me hooked.