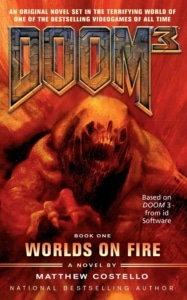 With the release of id Software’s epic gore fest, Doom 4, or as my friend states, “the Doom,” I was ready to reengage my lifetime obsession. Never much of a gamer, preferring bookworm status instead, The Ultimate Doom in 1995 was always an exception. The Ultimate Doom captured my child’s imagination with its sinister corridors and puzzle-like charm. Dark, foreboding, eerie and corny all at the same time, Doom gave me epic nightmares for years, and oddly for that reason I kept being drawn back. This was brilliant storytelling set in a quirky world of aerospace corporations on far flung moons of Mars (later moved to Mars itself in Doom 3) where invading demons and an opened hell portal threaten the safety of humanity and the future of the universe itself. Getting back into the groove after ten plus years of no new Doom releases, the fourth Doom installment has me once again gaming, this time on more modern equipment with my fiancé’s inordinately patient tutoring. Around the same time, I found the old novelizations from Doom 3 gathering dust in a forgotten bookshelf. Just in case the new game doesn’t awaken my deepest fears and stir those internal monsters in the dark, I decided to do an homage to Doom both in gaming and in bookworm style. Plus, I need to catch up for whenever they decide to do a Doom 4 spinoff book series.

The year is 2144 and Doom’s ever famous insidious company, the United Aerospace Corporation, is more organized and soulless than ever. Following the story-line of the Doom 3 game, the global economy is in ruins and Mars is the only remaining hope of recovering dwindling resources and jumpstarting a new way of life. The UAC has full dominion here having built Mars City and the secret labs where the non-public experimentation into the future of teleportation is going on with . . . disturbing results. Meanwhile, the UAC functions as an autocracy with its own marine unit and army, far away from the puppet governments of earth.

Earth bound Ian Kelliher, now head of the UAC, has his suspicions about the 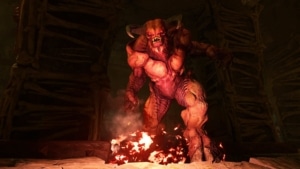 A Hell Knight from Doom 4.

gruesome experiments and the true intent of lead scientist Malcolm Betruger. Betruger is known as a genius who opened up space travel to his dying world, yet there is something that makes Kelliher more than uneasy. His own UAC based spies are reporting a sinister shift in morale and an increasing number of “incidents.” Determined to get to the bottom of the intrigue, Kelliher sends UAC lawyer Elliot Swann and his super strength Marine Guard Jack Campbell to confront Betruger in person.

Meanwhile, strange artifacts left behind from a previous civilization are appearing throughout the Mars archaeological digs. Far flung teams are inspecting the glyphs and trying to determine just what happened before that left Mars, once the unknown hub of a distant civilization, barren and inhospitable.

Along for the ride, key protagonist Special Ops Marine Lieutenant John Kane is back on earth, fighting in the Middle East against Russian forces. Given a direct order that would effectively kill thirty of his men, casual trade-ins from a back room political decision, Kane decides to stand for ethics over orders. His daring actions, however, are considered treasonous and he likely faces the death penalty for his blatant insubordination, saved lives or not. When the UAC steps in and assigns Kane to the Space Marines (as a Private no less), he takes the deal because it’s better than death – right? Or is it? Why do they need a man like Kane as a security guard stand-in for Mars City? What do the powers that be anticipate happening and does it have anything to do with the arrival of Elliot and Swann and their involvement in a top secret experiment scheduled to determine the program’s history? 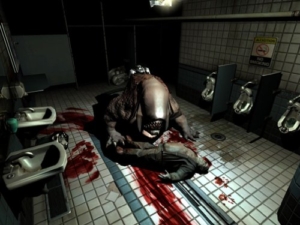 As any Doom fanatic knows, the story line of Doom 3 serves as a prequel to the series. In the original Doom we start out as an unknown marine, the last survivor of a demon invasion on the Phobos and Demos moon bases. He alone fights through the ramped up gore to save the bases and defend earth. It’s presumed that even he doesn’t know what happened or how the portal to Hell was opened. Well, now in Worlds on Fire you have all the details. Instead of focusing on battling demons, Worlds on Fire underscores all the background shenanigans, sellouts, and unethical science that lead to the original Doom disaster. That’s both the beauty, and the downfall, of the two book Doom 3 series.

If you read the original four Doom novels you’ll recall that the unnamed marine in the game is Fly Taggart who starts as he means to go on, shooting ‘em up and careening his way through the organically changing compound. The series starts well-ish (for books based on video games, let’s be honest) with Knee-Deep in the Dead but soon goes full weird, does not follow the game stories at all, and lands us with two demons named Sears and Robuck (which is at the beginning of the third book – Infernal Sky ­–  and the reason I stopped reading.) While I missed the insane amount of action from the first half of Knee-Deep (before it turned goofy and un-Doomish) I was more than relieved to see that Mat Costello’s Doom 3 books were totally different and distinctly less insane and far more readable. That being said, for a first-person shooter action packed sci-fi horror extravaganza, Worlds on Fire is remarkably slow paced and low key.

The demons and the hell portal don’t appear until the last twenty or so pages. Just as Kane begins fighting Pinky Demons and shit gets real, it’s over. The hundreds of pages beforehand are just slow (and I mean very slow) build up for the portal’s opening. And all those hieroglyphics and dig sites on Mars which causes readers to reminisce about those creepy moments from the game – mostly absentee here.

Meanwhile, Doom tries its hand at character development – and annoys fans along 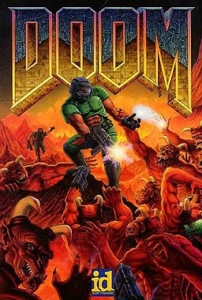 The original 1995 Ultimate Doom cover art. Also used as the first cover for Knee-Deep in the Dead.

the way. What are you doing Doom? I want some hair-raising horror ceremonies to slam that portal open and then get to the monsters already, or Betruger’s deal with the Devil. But. . . no. Everything barely moves in an effort to create some type of fake tension, even though we all know the Doom story by now and exactly what’s going to happen. The characters are mostly stereotypical blobs and that’s cool, because this is Doom. That’s why the characters have remarkably short screen time on the game because it’s the plot (sort of), the visuals (i.e. monsters and remnants of ritual Satanic ceremonies), and most importantly the living maze of puzzles that create the atmosphere and the pull. If the characters were well done, I guess I could get down with that too. But they’re just not. As a matter of fact, readers get the distinct feeling that Costello is trying desperately to fill some page space and hit a certain mark. When the good stuff gets cranking and we start to invest in the characters because of the circumstances surrounding them, everything comes to an abrupt halt. And let me tell you, having started on the next book in the series, Maelstrom, the action continues to remain shoved aside as we return to earth and have some vacuously long chapters about undersea research.

But still, it’s Doom and it’s a book in the Doom world that is marginally entertaining if not anywhere near the standards set in the game. For fiction based on a video game – it’s exemplary, because we all know how bad those novelizations usually are. Die-hard fans need to pick up Worlds on Fire if for no other reason than to see what was left out of the game (Costello was also the writer of the far better Doom 3 script and therefore an expert on the missing scenes as it were.) Even more importantly, its Doom merch and it could be a lot worse (remembers Infernal Sky and shudders). If you’re contemplating this book to begin with, you must be a Doom junkie, so I say go ahead and pick it up. Satisfy your curiosity and fandom on this so-so Doom rendition because ultimately, it’s just a pleasure to be in the Doom world again, even if it’s not as kick-ass as the long running game series. And, unlike the original book series, it’s not so bad that you cannot actually finish it or you spend most of your reading time dramatically rolling your eyes. So come on, get down with the sickness and revive the twisted, infernal world of your darkest imagining.