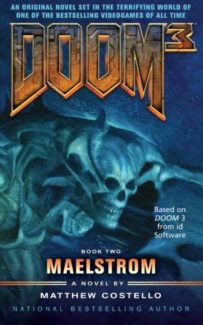 Doom 3: Another Lackluster Novelization in an Action-Packed Game Series

“Welcome to my domain! Behold the shape of things to come. The time has come for the forces of Hell to escape their prison and drive Mankind into darkness. Your darkest fears will soon be realized as your soul burns in Hell! There’s nowhere to run. I am everywhere. And you will never find the thing you seek!”

Following up on the literally gut wrenching Doom 4 gorefest with the fiery infernos, sizzling hell portals, and rending demons, I was more than ready for another dip into this tantalizingly disturbing world which has captivated me since I was a little kid back in 1995. Being an all-around Doom fanatic and bookworm extraordinaire, it was no surprise that I had to follow my dark addiction into its many different, often disappointing, novel adaptions.

After following Worlds on Fire, the first in a two-part series dedicated to Doom 3 and written by the same man (Costello) who penned the game script, the lackluster pacing problem was overshadowed by the now-it’s-going-to-get-real ending. The carnage has started, the portal opened, the monsters loosed, and how on earth can pacing and introductions be a problem anymore? It’s time to haul ass and a BFG in the ultimate battle between good and evil. And so, Maelstrom promises to carry on the Doom tradition which it unfortunately does a little too well. Doom the game is strong on action, dark horror, and piles of gore. What it has never historically been strong on is a translation to the written word. The first Doom series with Fly starts off creepy only to bumble into the goofy and the absurd leaving hell for demons named Sears and Robuck. While Costello avoids the silliness that plagued the later series, his pacing and general lack of direction become even more heightened and disastrous in the final showdown. Maelstrom goes to hell – and I’m not just talking about the famous Doom journey either.

Readers expect the book to get cranking now that all that intro and foreshadowing is over. With the monsters already on the loose this seems like a sure thing. But it’s not. Immediately within the first chapter our monster madness stops, everything goes quiet, and we’re back to sitting around in the “creepy” Martian darkness waiting for someone to finally do something, for the love of God.

Eventually, a second wave from the opened hell portal cranks the carnage again – but that’s about fifty pages before a lackluster conclusion. With pages running sparse, the reader keeps flipping anxiously… how is there only thirty pages left and the journey to hell and final monster showdown hasn’t even happened – or been mentioned as happening – yet. Well, we think, since the book is just meandering over inconsequential stuff when the hell trip does finally take place the slow pace will draw out our experience of this frightful plane and cash in on that Doom brand. Unfortunately, that’s about the time that Costello clues into the fact that Doom is supposed to be fast paced. Kane rips his way through hell and is back before you know it. The narrative is happily ending, sans the shocking whatever happened to Betruger ending from the game and details of the consequential clean-up. Some truly deus ex machina interventions with scant details and information happen in-between to make Kane’s trip to hell and fight back a breeze. The long sub-plot regarding the scientists in the depths of the ocean and their sponsored research is dropped, having proved not in the least connected to what’s going on at Mars. There’s a hint that something has been unleashed on earth – but no one really follows through with the investigation and here the series ends.

Costello seems misdirected from the beginning of the Doom 3 books to the end. He chokes when actual action happens and flies through it grabbing at pat solutions while ignoring how previous plot threads are breaking. Then, for huge expanses of pages, the narrative just sits there, obviously uncomfortable with the fact that it doesn’t know where to go or how to even begin looking in the right direction. It’s as though writer’s block has been taken from conception into active demonstration and it actually hurts the reader to see the books trying so hard that they effectively shoot themselves down. Of course, thanks to my nerdy fandom and love of Doom if more books are spawned based on Doom 4 I’ll buy them and read them. But sadly, I’m more than certain that an adequate (I’ve given up on good) Doom book will never be written. 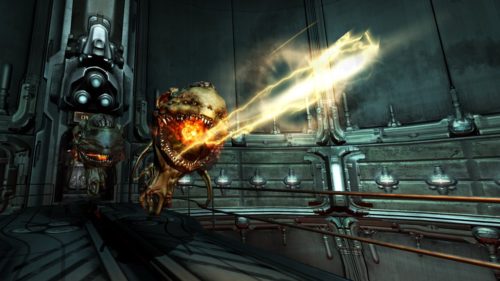