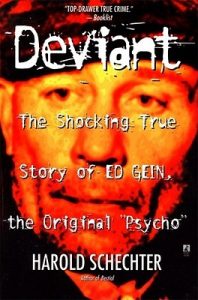 Harold Schechter’s Deviant is the true crime account of Ed Gein, a seemingly unassuming man in a rural town in Wisconsin whose crimes inspired cinema depictions of psychopathic killers all the way from Norman Bates in Psycho to Buffalo Bill in Silence of the Lambs (as well as others – consider the house “decorations” in Texas Chainsaw Massacre.) This audiobook was my first encounter with this famous killer, and it was surprising to see that this man’s nightmarish existence has inspired some of the darkest, most gruesome fiction in our present time. Think lampshades made of human faces, drawers full of body parts, and a dark, hoarder-ish house with dead women suspended from the ceiling. That was what cops found when they closed in on Gein and these are the types of horrors Schechter attempts to unravel in Deviant. 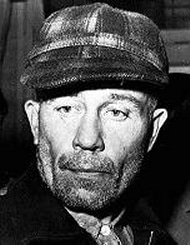 As Schechter sets up Gein’s early life, the inspiration for cinema becomes apparent. Controlled by a vicious mother, Gein is isolated, steadily indoctrinated, and programmed to hate all women (except, of course, his sainted mother). It’s little surprise then that when she dies a lifetime of abuse and chronic loneliness perverts an unassuming man into a monster. The cause and effect here is obvious, but what actually went on in Gein’s house, how many women he killed, and his proclaimed grave robbing are not. If you’re looking for answers to what Gein actually did – to the entirety of it – then you’ll come away from this attempted sensationalism annoyed. There are no answers. Gein himself lied and obfuscated, and the number of body parts found don’t match the numbers of murdered or missing women. What did Gein really do? We know he killed. We know he grave robbed. We know that he tried on the skins of his victims (this is where Buffalo Bill’s inspiration was drawn), but the full timeline of what really happened, the whys and ins and outs of this man’s reign of terror, remain a mystery. All we really know was what the cops found and the aftermath for a sleepy little town rocked by horror.

Schechter’s subtitle (The Shocking True Story of Ed Gein, the Original ‘Psycho’) gets at the heart of the story – Gein’s effects on popular culture. As a reader of true crime himself, Gein went on to influence the fictitious depiction of serial killers across popular culture as well as an oddly morbid kind of humor, a defense mechanism against what could not be believed and accepted. It’s interesting, but to me not the drawing point of the story. I wanted to know the unknowable: what really happened. As it is written, it comes off almost as a movie itself, mixed in a mystery, and while there are a few gruesome segments, there is less detail and more setup, atmosphere, and telling to create a mood and show how that mood went on to influence what came later.

Deviant is certainly one of the more astonishing true crime books, mostly because of extreme nature of the subject matter. Yet, it’s not the best true crime book out there. It captivated me, but didn’t entirely resonate and oddly, isn’t as memorable as other stories. I think this is because Gein himself remains an enigma here, a bit player in his own story. Of course, the answers I want are impossible to ever find, and with the material that is available, I doubt Schechter could have done better.