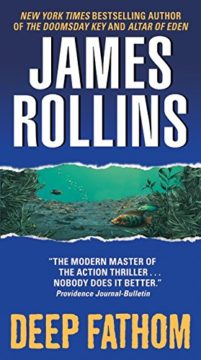 Beneath the surface of the ocean, ancient civilizations and apocalyptic secrets lay. Above the surface, the world is on fire in Deep Fathom.

Ex-Navy Seal Jack Kirkland is trying to escape his shattering past – that one space mission that cost him both his career and the love of his life. Now piloting his own ship, named Deep Fathom, and exploring the ocean floors for sunken galleons, Jack lives a sequestered life, remote even from his fellow crew mates. All that, however, is about to change with literal earth shattering consequences.

Meanwhile, above the surface it’s just like any other day. Around the world people are living their lives whether it be a tour guide and his trusty dog in the Aleutian Islands dealing with some smart-aleck tourists or a woman grabbing her morning coffee and worried about her delayed commute. The President of the United States is in the middle of an important deal with the other leading nuclear power, China, and all is going well. One of his assistants has now gotten the big man’s attention and it seems a fortuitous day for peace and career building. . . until the eclipse and the earthquake. Until islands start to sink and ancient continents start to rise from the deep. Until some mysterious force pulls the escaping Air Force One jet into the center of the Ocean, never to be seen again.  Until what remains of the world greets the new day in ashes: craters where entire countries once were, chaos reigning worldwide. 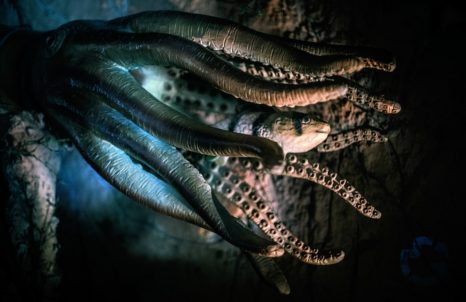 Now, it’s a fight for time as Jack Kirkland unwittingly gets pulled into the search for the missing Air force One jet and instead finds what could be the key to this prelude of destruction. Unfortunately, an old rival who blames Jack for his sister’s death is also on the scene, and to him unraveling the tectonic secrets of the recent tragedy, and what it may mean for the future, takes a backseat to cold-blooded, assassin style revenge.

Meanwhile, in the White House, the Vice President finds himself in power and sees this as an opportunity to undo the China deal and usher in a new era of war and American power. Working with the CIA and his own goons, one of whom is Jack’s would-be-killer, the political forces that be are interested in using a cover-up to redirect the world’s rage. This means all-out war but even more deadly, it means ignoring what really happened to Air Force One and what it means for the world’s all too short and tremulous future.

Half a world away in Japan, Nobel prize winning scientist Miyuki Nakano and her intelligent super computer/ AI unit Gabriel team up with Canadian professor Karen Grace to research a formerly submerged civilization. While going through a city recently heaved up from the depths of the ocean, the friends find a mysterious crystal with unearthly properties and begin to research the city’s ancient ruins. As they decipher the meanings etched in the ancient buildings and the nature of the crystal, an eerie prophecy comes into play that ties into Jack’s deep ocean findings.

Together, Jack Kirkland’s story weaves with the scientists surprising findings, a group of priest-like killers who are attempting to retrieve the strange artifacts and protect the secrets of the buried continent, and the machinations of a one-track enemy with elaborate vengeance on his mind. With the clock ticking down and the action high octane and deeply adventurous, the fate of the world and its resolution slams into one final, crystalline moment of sacrifice and semi-science. 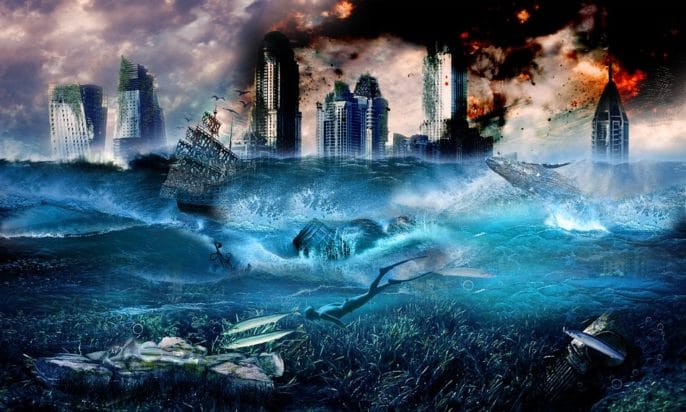 This is my first encounter with Rollins and completely accidental. A long-ago mega eBay lot of horror paperbacks produced this particular volume (massively mislabeled, as Deep Fathom is definitely an action/adventure/thriller with aspects of a techno-thriller embedded). The story is deeply evocative of Indiana Jones; we have ancient civilizations, mysteries, booby-traps, strange cultish indigenous groups, and enough doomsday for the world three times over. This adventure has a Jules Verne-ish quality too, reminiscent of Journey to the Center of the Earth with its strange evocations painting a vivid landscape of hidden parts of the earth, in this case underwater mysteries and drowned villages. It’s beautiful in the nature of all explorations, both foreign and inherently familiar.

Complementing all this discovery are the characters, a mostly small yet central cast of do-good researchers plus the haunted Kirkland. While the plot keeps hopping between the watery graves of hidden cities and the power plays of a selfish Oval Office, the characters keep us anchored and invested. It’s surprising, because the purpose of Deep Fathom is non-stop heart pounding escapades complete with a varying assortment of high-tech assassins and last minute escapes/tricks. Yet, we care about Kirkland, about Karen, about Miyuki, and even her Noble prize winning computer. There are themes of forgiveness, friendship, atonement, and love that take these high octane survivors and cast them in a light that just bonds us even more to the outcome.

Then there is our villain – or at least one of them – Jack’s would be assassin. Here the flavor of the story settles for old school scoundrel when, really, we would have liked this particular adversary painted with a broader, less fanatical brush. What makes this man tick and why such a strong hatred? Yes, his sister is dead through Jack’s mistake, yet the man doesn’t seem capable of really caring about his sister. There needs to be a deeper level to this villain, although for now he is simply enjoyable as the catalyst of far-out schemes and epic submarine chase scenes. 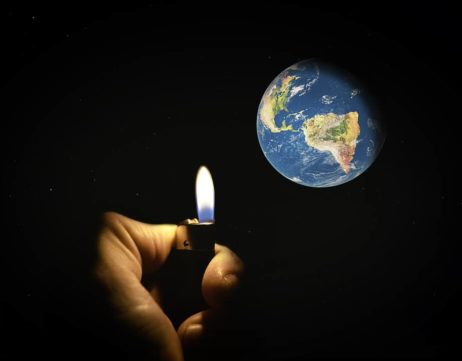 The Vice President, one of the more interesting of the side-villains, is intriguing. Why the desire to war with China? Why the fixed motivation for destruction? This is another antagonist whom I’d love to hunker down with, to dissect his motives and how such a man became Vice President in the first place. Up the villains, Mr. Rollins, because otherwise your story and the people who frantically swarm through it are residing at an epic level.

Then, of course, there is the ending which we have been rushing toward at a screaming pace. A lot has happened since that first eclipse, and now it is all boiling down to this one pivotal moment and there are still unknowns, still secrets and horrible, fragile human guesses. And then, dues ex machina like, it all comes together. And yes, yes we’re happy with the resolution in a way, yet we don’t buy-into it. It’s too good to be true, too tidy, too neat and consequentially perfect. I’m not saying that a disaster ending would be better . . . but the happily ever after takes the complexity and the alignment of all the facts and shoves them into a simple box when these particular ruins require a submerged dome to bedazzle. The complexity of the plot thus far demands an equally complex, and perhaps uncontainable, conclusion.

So now, thinking I was getting some sort of horror tale with killer octopuses and such, I conclude Deep Fathom with a new favorite author and a taste for adventure fiction that is more robust and uncontainable in its own right. I eagerly anticipate diving into further worlds created by Mr. Rollins.