Death of a Neighborhood Scrooge 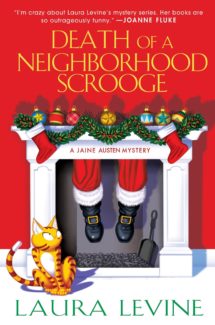 ‘Tis the season for frozen chocolate Yule logs and murder! Our lovable freelance writer with the tie to Toiletmasters is back and ready to spend a ritzy Christmas housesitting in opulent Bel Air with her best friend and neighbor, the inimitably fashionable, kale drinking, Christmas crafting Lance. There is only one fly in the Christmas pudding . . .or maybe two . . . or. . . a small infestation.

The main problem is former child actor and next door Scrooge, also known as Scotty Parker, who spends his pinch penny days tormenting neighborhood children, destroying any form of festive cheer, blackmailing next door neighbors, and making both his present and ex-wife generally miserable. When, thanks to an escaped Prozac, Jane lands in his clutches and ends up spending the yuletide editing his miserable screenplay (The Return of Tiny Tim: Vengeance is Mine!) it looks like the holidays are doomed. When Scotty turns up colder than his own shriveled heart, everything just gets worse as Jaine’s fingerprints are found on the delectable, chocolate covered murder weapon. In a rush to clear her name and make her escape (and bring back her two-timing feline), Jaine’s self-propelled investigation churns up a lot of hard feelings, some of them directed against her!

Sixteenth in an ongoing series, both Laura Levine and the ever peppy Jaine are back, fresh, and ready for new dating disasters, feline fracas, and some yuletide vengeance – Tiny Tim style of course. As always, Levine has us laughing from the first page with her typical light, comedic mystery that is cozy for both its humor and the warmth we feel towards its long running characters, including everyone’s favorite faddish shoe salesman (Lance – the best sidekick an elastic waist, chunky monkey addicted girl could have.) On top of the usual absurdity of the soon to be victim, especially a bah-humbug type, we have more dating disasters for both the ever infatuated Lance and the reluctant Jaine and more email shenanigans from Jaine’s parents (this time “enjoying” a cruise with the dreaded Lydia in tow alongside a bratty prankster kid). 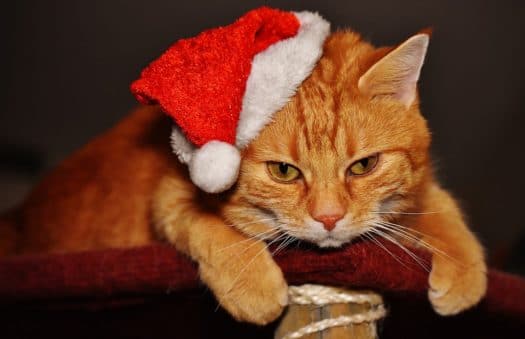 Prozac has a starring role, but mostly in jilting Jaine for Scotty’s Playboy-ish wife which, dare I say it, actually makes us hurt in Jaine’s place. Ah, Prozac, you traitorous feline! Perhaps you foreshadow the book’s epilogue and the return of another treacherous male from Jaine’s past . . .

The posh home in Bel Air, complete with all its breakables and pricey (priceless) accoutrements is subject to surprisingly little destruction, despite our anticipation that between Prozac and Jaine the place would be practically razed to the ground. This seems like a great (and, admittedly, obvious) set-up for humor, and one that I felt was sorely missed. While Death of a Neighborhood Scrooge had many moments of giggly comedy, some of the luster was lacking since the full-out absurdity was knocked back a notch just when we wanted it to really crank up.

The mystery was suitably convoluted – everyone (even Jaine) wanted to off Scotty, aka former child star acting as Tiny Tim in a forgotten made-for-TV movie. I was, surprisingly, able to guess the suspect several chapters before the full reveal, which is unusual for me; I really don’t try that hard in a cozy mystery, preferring the fun and surprise. The conclusion was another moment where slowing down the usually enjoyable fast pace would have allowed for some great comedy (let’s just say Lance gets a date and Jaine decides to tag along). Still, everything you love about the series is here and strong. I wouldn’t start with Death of a Neighborhood Scrooge, since many of the others books in the Jaine Austen series are even funnier, but I don’t think starting here would turn off potential readers either. This book is enjoyable, funny, and good. It’s just that some of the others are hilarious and great. Still, very much recommended. Can’t wait for the next in the series!