Death of a Bachelorette 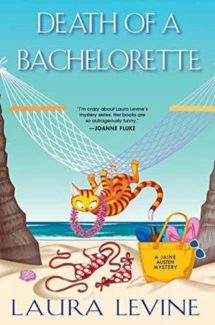 Ready for a romp in the tropics, Jaine Austen thinks she’s finally hit the big time and can escape from Toilet Masters (in a rush to flush) into the glamorous world of TV authorship in Death of a Bachelorette. Her chance has come, at last, with Some Day My Prince Will Come – a sleazy reality TV show featuring a daft and very distant heir to the British throne, one word extraordinaire Spencer Dalworth VII, and a cast of busty babes looking to marry rich. Jaine’s job: enjoy the sumptuous TV producing lifestyle, sashay around elegant island haunts, and write dialogue for the befuddled prince… what could possibly go wrong (other than people actually seeing Jaine’s bathing suit?)

Some dreams were never meant to come true and Jaine’s aspiring high time career takes a swan dive before she even leaves the shaky plane when the previous writer thrusts a can of heavy duty bug spray at her and leaps onboard, desperate to leave. Soon Jaine finds herself imprisoned in the stifling attic of a non-air-conditioned mansion with some B-horror movie sized bugs (don’t forget Godzilla, the food stealing water bug). So – the digs aren’t as great as they could have been. . . but what of the food, the culture, the respect, and the super easy dialogue of a reality show?

Spencer Dalworth can only say “Brilliant” and call mummy for advice. Manny, the conniving producer, hordes food and Dove bars and lurking somewhere among the bodacious beauties vying cattily for Spencer’s attention is a cold-blooded killer. As island paradise transforms into purgatory, Jaine’s own romantic hopes transform from the attentions of a young islander to his wizened chieftain of a father who’s looking for a 12th wife to dine on stink fish with him.

Far into the disintegrating trip (later than usual) we have the murder and the horrifying prospective of staying longer in Sauna Central. Jaine has to do something and catch the killer quickly before more bodies pile up, and, even worse, before she’s forced to stay longer. But which one of the dirty divas is responsible for the deaths? Is Spencer really as bland as he seems? What is Manny hiding along with those Dove bars and why is the ex-love struck production assistant veering further into alcoholic dismay? All is not as it seems in the sweltering mansion and one by one Jaine discovers secrets that range from dastardly to demented. . . but can she find the truth before she sleeps with the stink fishes?

Levine’s work in Death of a Bachelorette is bouncy and breezy with the easy chuckles of a tongue-and-cheek parody aimed at the reality TV show world. Yet underneath all the chuckles and gigantic prowling insects there is a strong plot, solidly established early on. For a cozy series, the focus on mystery, clues, investigation, and all those gripping (and sometimes terrifying) encounters – something usually completely blindsided by character and cozy atmosphere – remains both strong and central to the storytelling magic. Jaine has always been a favorite sleuth both for her self-deprecation and relatability (this is a heroine who understands the every-woman and is delightfully non-perfect) and the complexity of the cases she’s involved in. It’s clear that the villain and associated set-up in Death of a Bachelorette was in mind from page one and the longer than usual pre-murder sequences necessary to build the atmosphere of tension and a host of suspects. The conclusion was shocking and yet inevitable, a puzzle piece that brings the whole thing together, wowing us with the ultimate image, and seeming so perfectly placed while it does so. Throw in the continual jokes, some emails from Jaine’s next door neighbor, and the usual Prozac antics and you have another exquisite offering in an engaging series. There’s more than one reason that I always preorder the latest Jaine Austen book with such glee!