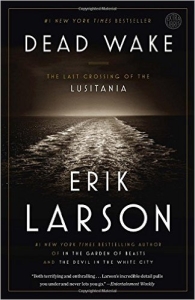 A Real Narrative of the Lost Titanic of History

Erik Larson is somewhere between a historian and an old school story teller. You can almost imagine him sitting by a campfire, in the dark of some forest night, bringing long forgotten people and old tragedies alive again in a blisteringly real way that only the darkness and the imagination can evoke. No small wonder that Dead Wake has a cover photo of eerie darkness then, the very title itself, harvested from a maritime term, functioning as a double meaning for what I prefer to call “the lost Titanic of history.” When we think of Dead Wake we see a ghost story, underwater tombs, and the examination of a mystery over 100 years old. It’s a great surprise then that when my book club announced this as our March selection, my fiction addicted self was less than enthralled. But hey, for this, I’ll have to tell you my own story.

Erik Larson has been on the bestselling list for years and his novel-like style of writing has captured both joy readers (my term) and history enthusiasts. I first encountered him in graduate school, when the head of our program (an ex-journalist) combined the fiction and non-fiction writers’ class. I was hardly happy. I didn’t want any dead, unarguable facts cluttering up the mystery and majesty of a story. Isaac’s Storm, my first Larson experience, was not his best work since his historical subject was unhelpfully elusive and I found the aftermath of the hurricane to be too gory and disturbing for words. As an ex-horror hound and splatter-punk fan, the fact that I was disturbed was just more proof that non-fiction cannot be enjoyed for the very fact that it is real. And here, all these years later, I have a heavy hardback in my hand, knowing that more real accounts of brutal death, and more of those damn listings of dates and times I’d so scrupulously avoided in my schooling years, was back to haunt me, at least for a month anyway.

Imagine my surprise then when I went from a grudging “well, the writing is quite well done” to an adamant addict who subsequently bought a whole lot more of Larson’s works. The Lusitania is usually a blip in our required schooling, history courses posing it as the instigation for America’s entrance into World War I (when in fact this happened two years later in 1917). A few conspiracists and smart people with a History Channel hankering know more, suspecting a trap placed by Britain and her then first Lord Admiral, Winston Churchill. It’s all shadows and sinister hints, but other than the fact that it sank, most people don’t know that much about the grand Cunard liner and its final voyage.

Larson weaves many narratives together and around each other, creating a sense of suspense and tension. We know what happens, ostensibly anyway, yet the how and when and why remains foggy and the people, real people who sailed on the Lusitania (some of whom survived, some of whom did not) captivate us with a sense of paranoia and immediacy. Perhaps most terrifying, their self-assurance of protection, the casual descriptions of life on board, and the very beauty and calmness of the day that would bring sudden death to so many, scares readers in a fundamental way. It’s us, going about our everyday lives, oblivious. In the background there are machinations and governments, but ultimately it’s a story of the people and that’s what makes it sing. The Lucy seems so much like a ship I could board, and from her glistening hulls to her four smoke stacks, there is something oddly entrancing about the doomed ship and when she sinks, we feel the loss a bit like an old captain going down with his ship. She has a personality too, a vivid life that is so normal we feel that she cannot, should not sink.

And so the tale goes. There are two parallel lines really, which I like to call the personal and the political. Most fascinating, we have the oscillating journal entries of Walther Schweiger, captain of the U-20 submarine which would eventually, by a series of incidents, bad luck, and poor information, torpedo and sink the Lusitania. Here, in the cramped confines of the foul smelling, imminently dangerous and uncomfortable U-boat Larson humanizes the enemy. Schweiger is a good captain, good to his crew and yet seemingly compunction-less about sinking ships and killing crews and even innocent passengers. It’s a strange portrait. We see this man rescue a puppy from a ship he torpedoed, allowing the puppy to live and breed (filling U-20 and several other submarines with new generations of canine compatriots) and we like the man and the men in a way. We feel the drive to be the best, to “sink the most tonnage” and gain acclaim and praise from the government and yet, we hate Schweiger for not being more obviously torn about his situation – more distressed over the terrible loss of human life. Yet, we cannot fully loath these people, but only see the humanity in war which brings together regular citizens and calls them to do horrific things. An unwinnable situation on a personal and moral level.

Meanwhile, the passengers on board the Lusitania are less compelling but equally well drawn. They remain detached from war and their surroundings, safe in a naïve sort of manner that only the luxury of first class ocean liners can afford. The very mundane nature of their concerns and life on board, haunted by a creepy kind of foreshadowing (the life boat drills for one) combine together to create a malaise, that stifling heaviness before the storm. The more we know the more the paranoia escalates as they remain unaware and, terrifyingly, the more we see ourselves in this central, seemingly not exciting role.

Meanwhile, we have President Woodrow Wilson grieving the death of his wife, starting a new, troublesome romance, and desperately attempting to keep America neutral. In Britain, however, Room 40 has a bead on German communication, a cracked codebook the enemy doesn’t know about, and enough information to pinpoint the notoriously ruthless Schweiger and his intercepting route with that of the Lusitania. Winston Churchill himself remarks in a letter that the more neutral shipping, the higher the likelihood that an American liner or a liner with American passengers would be sunk, which was a thing to be desired by Britain, who needed US assistance in the war. The political intrigue bubbles and the Lusitania is evidently a pawn as she tracks the ocean, effectively blind to this glut of information. Unaccompanied by the usual patrol of Destroyers, mysteriously un-informed about submarine activities in the area and a newer, safer channel to sail, events converge to create a ship wreck that occurred brutally, dramatically, and within eighteen short minutes.

What makes Dead Wake so irresistible, and ultimately so disturbing (beyond the descriptions of the wreck, the lives lost, and the unusually high percentage of families and children on-board) is the way that the stories interweave to create a picture of our world which is still very much relevant. In the midst of an election with pundits warbling on TV about everything from Donald Trump to Black Lives Matter to you know, hand measurements, you have to wonder what happens behind the curtain and what is unseen. What are we not told? How we are deliberately mislead?  How many events, both contemporary and ancient, have been buried, like the Lusitania which despite all of the information, still ultimately remains a mystery (i.e. why was the information not given to her, what was that second explosion, why was Churchill so determined to destroy the obviously innocent Captain Turner). As we go about our daily lives, are we just pawns of something bigger, something not concerned with us but whole countries and politics and power plays?

We see now the effects of Germany’s unrestricted warfare in the hindsight of history, which shows us how one brutal war bubbled into another and the Lusitania makes us wonder, where are we on this grand timeline of cause and effect? Larson takes us in, takes us for a tour, drowns and wrecks us, and then asks us to wonder and continue wondering. He makes history come alive and makes us care as though this event had just happened and he also opens the way to, as Churchill ironically said, learn from history so it does not repeat itself.