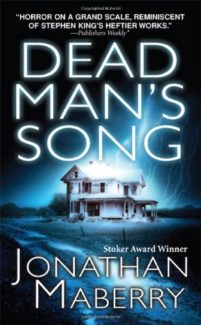 Violent, animalistic murders, blighted crops and desecrated corpses, and something evil lurking behind the heavy humidly of summer coming to an end: Dead Man’s Song is a strange mélange of the supernatural woven with the criminal. We’ve got a blue’s playing ghost, a haunted hero and his lady, a suspected dead werewolf, and an army of some sort of zombie/vampire hybrid, all tied into a strange, undercover legacy and something called the Red Wave.

I’m going to admit first off – it doesn’t sound good, and to begin with I was unimpressed, especially with the slow build and the secrets. It didn’t help that occasionally my random grab-bag of horror books, purloined from different eBay book lot bids, started me on a series already underway (it turns out that this is book 2 in the Pine Deep trilogy); yet, as the tale continued the characterization drew me into a story that at first I didn’t want to follow. 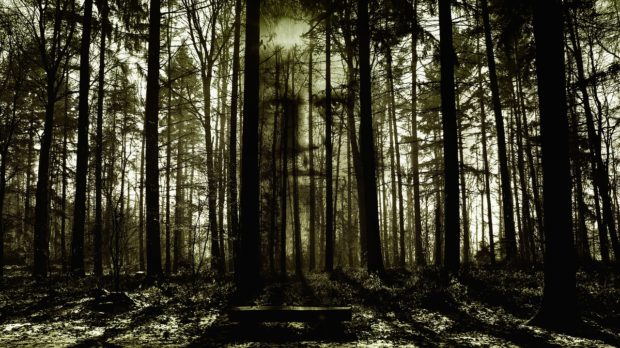 Malcolm Crow, who at nine was saved from the town’s undercover serial killer/potential supernatural monster, knows the full truth behind the legend of the massacre that shook the town twenty years ago, and looks like it is set for a repeat. Everyone blamed the semi-vagrant black man, Oren Morse (known as the Bone Man thanks to his preternatural thinness), and his violent, lynch-like demise is written off as the end of the terror. Yet Crow knows better and is the only vocal proponent who holds the truth of what the Bone Man ended and the knowledge of his heroism and sacrifice. Little does Crow know that this willingness to keep telling the truth is the only thing keeping an awakened ghost and good-guy in the game. Now, as a curious journalist comes poking around, Crow thinks it’s time to tell the truth again – even more vocally. But another entity long dead is coming back into power and has other plans.

As the fight between good and evil takes place in the background, our foreground characters are feeling the effects. A series of murders at the Guthrie farm leaves Crow’s fiancé and remaining in-laws shaken. Mayor Terry Wolfe is having strange dreams of turning into a devouring monster. A young boy, Mike, abused by his father, Vic Wingate, is having his own subtle transformation, suspended between the yawning chasms of terrible choices that he cannot see. 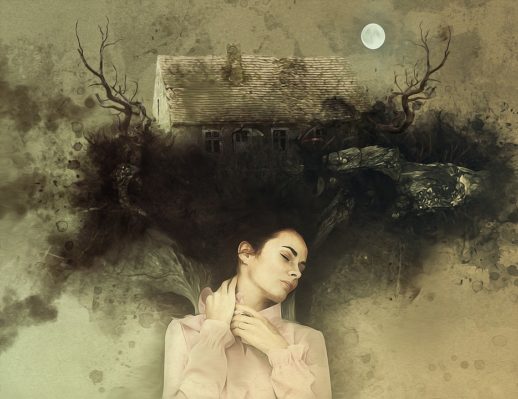 In the meantime, a criminal gang run by psychopath Karl Ruger supposedly roams through town, picking off more residents. But nothing is coincidental and a strange army is slowly gathering power down in the swamp where the voice of a long dead man (who may have a longer, more shadowed history than anyone could suspect) is calling the shots.

The book is an incredibly slow build, and if the summaries of Ghost Road Blues (the first in the series) are true, then it’s an even slower story than at first evidenced. Yet, there is something here in the characters and the intricacies of their relationships. It’s certainly not jaw dropping drama by a long stretch, but the craft is executed well enough to keep us reading and eventually wondering about that voice in the swamp – a voice Crow thinks belongs to long dead town resident Ubel Griswold. Pepper this in with some of the atmospheric descriptions and you have a horror book that while hardly heady is nonetheless enjoyable enough to keep readers guessing and rooting for some of the characters, including the haunted mayor (with his adorably named feline, Party Cat) and the young boy who seems to be some sort of savior/anti-christ in the making. 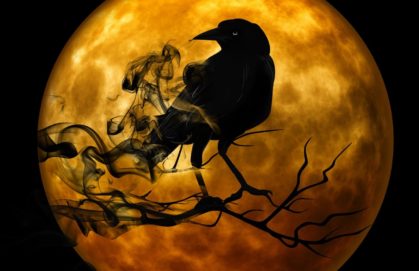 I was interested enough, despite the complicated merging of everything from werewolf lore to sentient vampire zombies, to grab the next in the series. I need to know just what that young, battered boy might become (a force for evil or for good), what will happen to Terry Wolfe with his old scars and bad dreams, and just who this Ubel Griswold is and what he ultimately wants from this Red Wave, beyond the villain’s satisfaction of destruction.) Admittedly, our goody-two-shoes Crow is somehow less interesting to me, and his story with Val, although prominent, is less inviting somehow.

Dead Man’s Song, then, is not exactly a memorable book, or even one that is cranking the full potential of horror yet, but it’s an interesting read that will invest readers enough (however skeptical or out of the loop on the series) to keep reading and keep wondering. There is a great potential here, so I do have hopes for the final book in the series, Bad Moon Rising, and I even think I’ll pick up the first book I missed to complete the loop.