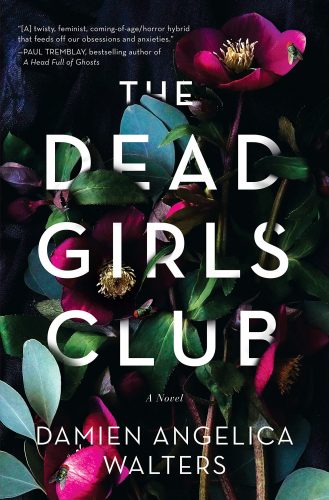 There was a time in Heather’s life when, like most children, she was obsessed with gruesome stories: serial killers, death and dismemberment, witch hunts, and more. The sly stories, half fable, half truth, drew Heather and her tight knit group of friends together. Story-time was a place of imagination and respite. But none of it was real . . . or was it?

Heather’s best friend and the leader of the club, Becca, can only think about the Red Lady, a witchy figure, murdered and desperate for revenge. It started as a tall tale and has taken on its own life. Becca wants to summon the Red Lady, and as the group gets deeper into the recesses of the macabre, Heather starts to pull away and be shunned. And then . . . then Becca is murdered.

Now, as an adult, Heather is still haunted by memories of Becca, the Red Lady, and how her childhood friends turned into an obsessed group. And, of course, she can never escape what happened to Becca. But Heather is making amends. She is a different person now. A good person who helps children. But when she begins to receive letters and a locket, she becomes paranoid. Is Becca really dead? Was the Red Lady just a story? Was there a witness to what she did that night, in the basement, someone who now wants something from her?

Dead Girls Club is told in alternating timelines, with the childhood Heather being a significantly more empathetic figure. The secret is exposed in the first few chapters – Heather killed her best friend and has never told anyone. The adult Heather is scheming, more than a little unhinged, and desperate to keep the past far away from her and her family. The adult Heather may have some regrets, buried deep, but she is mostly a survivor, willing to do anything to silence this new, unknown voice that is calling her out. Only in the recesses of the past, through the voice of a hurt and scared child, do we find anything truly human, anything that while, however wrong, is recognizable and emotional. Adult Heather, on the other hand, is a different kind of animal.

The story itself is slow, the past being far more interesting than the present. Heather’s desperation to hide her act – and the fact that we know what that act is so early on – dispels the tension. We don’t really care if Heather gets caught, if she loses everything. There is a certain amoral quality to her now. Not so much villainous as simply alien and isolated. This destroys the atmosphere we need to feel, the combined paranoia, that would help propel the story. Instead, we’re repulsed by our main character and while somewhat interested, we remain mostly remote and aloof. It would be nice to know what happens, to know who is now targeting Heather, but not really that essential.

The conclusion leaves as many questions unanswered as it answers. By this time, Heather has become more of an actual person, and some of the final details of the killing have created a more emotional tie between the readers and the characters that people this story. Yet the Red Lady herself, an admitted creation of Becca, fails on a supernatural level. It’s hard to say just why. Perhaps it is the fact that Becca admits to the fabrication, that it is known early. There are moments where we touch on the idea of group hysteria: how you can make yourself believe even when you know better. Yet it’s weak and fractured.

Overall, Dead Girls Club is interesting but not exciting or especially memorable. It’s an ok horror story. I wouldn’t have sussed it out on my own, but it was a book club read and as such wasn’t a bad adventure, but also not a favorite. I won’t return to this particular author or type of story, but I didn’t hate it either.