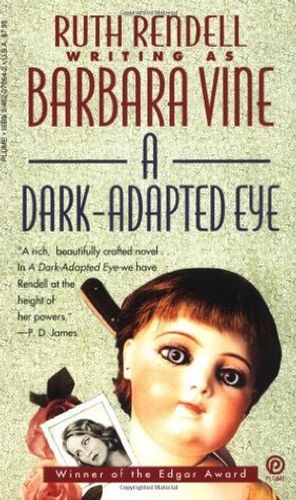 There is no death more precisely calculated than an execution. To Faith, her aunt Vera Hillyard’s hanging brings this fact unalterably home. While Faith has lived on the periphery, she has watched the entire family drama unfold, seeing her father’s respect for his supposedly perfect sisters dwindle into something shameful, hidden in a box, forgotten, unspoken, and covered by  the dust of time and disappointment. She has seen her strange nephew who grew up shrouded in secrecy, and now she is being approached all these years later by a journalist who wants to drag it all, cringing, into the light. This brings back her own reminiscences, and with the distance of age and experience, she sees and understands more. But the answers, if there ever were any, died with Vera. All that is left is a broken family and a smattering of scandalous guesses.

A Dark-Adapted Eye is a strange book, half sonorous remembrances and half factual layout. The journalist’s wish for details and dates, relations and family trees, is embedded in something harder to pin down: the triumphs and ultimate failures of a life. Vera is a strange woman, even seen from afar, and Eden, her half-sister who is treated almost as a daughter, is a far more complicated character. Together, the two women have their own house, their own world, and a refined condescension that leaves the child Faith feeling forlorn and rejected and the adult Faith, looking back, somewhat more compassionate. The tale of affection gone sour, of privilege and betrayal, and of endless secrets, foments over the years, and we get the benefit of Faith’s distance and age, her hindsight and ability to piece together what is known later, to create a strange mish-mash of a mystery, half letter, half book of facts.

Barbara Vine has chosen to tell A Dark-Adapted Eye in a strange way. None of the main players ever get to speak, only this niece who serves more as a mouthpiece than a character. The time of events oscillates, interrupted with histories and entanglements and the knowledge of latter years, yet it all combines into something that is ultimately powerful and deliciously sad, as is the way with all evil secrets.

And there are plenty of secrets here. Despite the time that separates the audience from the first writing, there are still plenty of shocks, plenty of aberrations to horrify both past and present audiences, and the ineffable selfishness that drives the heartlessly preferred. The secret isn’t what happens – we know this from page one – but why it happens. And yet, here we never get the full answers we want. We get hints, a mystery in a mystery, and a conclusion that leaves us still full of questions, even though we have followed the gyrating timeline right up to the act of murder. But who, in the end, told the truth? The answer, it appears, died with the accused.

The ending is both a strength and a weakness. The way A Dark-Adapted Eye is told – alternating between past and future, fact and guess – is good for the mystery aspect, but ultimately keeps us distanced from the characters. While the story is powerful, appealing, unstoppable, it’s not perfect. When I closed the last page, I ultimately found myself wishing that Faith had stepped down or at least away at times, and that the author had given us a glimpse into Vera’s troubled mind instead. Still, this distance, these now dead mysteries, gives the story a certain darkness of real family history, which ultimately dies with its ancestors.