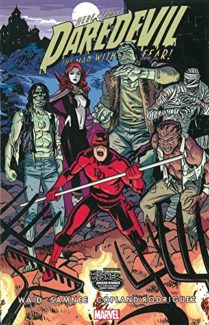 Daredevil Meets Up With B-Movie Monsters

Following up on Daredevil’s previous adventure, the Man Without Fear continues his stand-off against the Sons of the Serpent, a white-supremacist group (think a less organized version of Hydra) that has invaded the justice system of New York all the way from the work-a-day cops to the courtroom. With the Serpents insinuating themselves ever further into the system, the stakes are mounting, all while Daredevil’s best friend and partner remains bed ridden post-chemotherapy. Along for the ride, the Jester joins the forces of evil for a little fun and Daredevil’s previous on-again-off-again love interest gets some airtime. But what does racism have to do with backwoods Kentucky, an ancient book, and a group of not-too-human monsters? Where is Waid going with this shift from gritty city realism to B-school supernatural shenanigans?

Waid has been concentrating on the Sons of the Serpent for a while, building the conflict, setting expectations for a final showdown. The Serpents are more and more in the courtroom, harming the innocent, spreading hate and systemic vitriol, all the while threatening everything and everyone Daredevil loves. So when the plot finally drops, image our surprise and blatant disbelief as we race away from the human monsters to actual old school horror movie monsters. I’m talking werewolves and mummies alongside a buxom babe (Satana) who turns out to be the devil’s actual daughter who is, alongside Daredevil, on some pilgrimage for a black magic book that is the Serpent’s sacred script. Cue shattering of everything this universe has established and the suspended reality we have long accepted and loved. Cue corny. 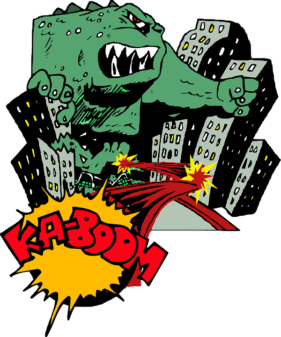 Daredevil has long followed the superhero script and given us a realm with everything from men with suits that transform them to the size of an ant to Hulk rampages and villains like the Spot with some weird dimensional travel capabilities. The appeal is that it’s all been so believable, so integrated into the rules of this universe which mirrors our own yet has its own essential magic. Add the ghouls in and the all-that-goes-bump-in-the-night supernatural twist and you shatter this carefully set world with something laughable and oddly cheap. Frankenstein and foes don’t fit with the sophisticated, long-running villains Matt Murdoch usually faces. Vampires in the shadows are more comical than serious, some sort of stand-in for the evils of racism that diminish the importance of the theme and the real life horrors Waid is evoking. Further this ridiculous side trip with the traditional southern bumpkins complete with pitchforks and a hankering for lynching and you have an overdrawn, underdeveloped aside that reads as more tangent than adventure. 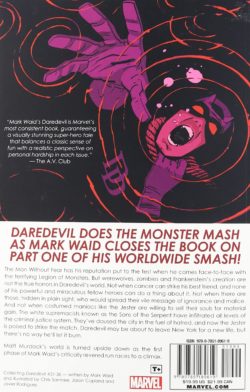 After we spend a good deal of time with these goofy ghouls, Waid bounces us back to New York. Now we’re setup for Kristen to suddenly have her moment in the sun, as it were. She’s been hanging around for 30 plus volumes and her purpose and characterization has always been ephemeral, the author plucking her out to build storylines and potential romantic tension that inevitably dissipates. Now, though, she has a microphone, the attention of New York, a Satanic book of dark magic, and an agenda: to tell off the Sons of the Serpent publicly.  It’s all part of another scheme to finally stop the Sons of the Serpent while interjecting some unnecessary commentary on just how awful they are (in case the entire ‘monsters’ in Kentucky allegory wasn’t clear enough). We know the Serpents are evil. We know that their ways are terrible, unwarranted, filled with hate and disgusting self-justification. We’ve seen them kill people, set-up innocents, and grin malevolently while doing it. Does the author think we’ve been asleep or just somehow missed the point? Once more, does Kristen think this tirade will somehow convert her enemies or shame them? What does this accomplish other than endangering the heroes who would be better focused on destroying the Serpents? The idea was evidently to provide a feel-good vent against the real evils of the world, yet once again, the delivery slants more towards corny than poignant. Even superheroes need logic and some planning. Well done tell-off speeches can be powerful and morally vindicating. The key here is the well done aspect.

As this volume winds down to the final scene, Daredevil plans to sacrifice everything as he calls the Serpent’s bluff, courtroom style. This is more like the traditional Daredevil, Bella Lugosi-ish monsters and on-air rants thankfully left in the background. Will Daredevil self-destruct himself and Foggy to finally rid New York of the Serpent’s influence? What demons will arise from his past, and what will Murdoch finally have to answer for in-front of everyone? What will the Serpents do as their secret goes public? Can our melancholy hero ever make it back from this seemingly final flame-down? If he does, what sort of vengeance waits for him? And what about that stolen tome. . . . good luck never comes from dark magic.

While Volume 7 has been my least favorite collection so far, I must admit that a kernel of forgiveness lives in my heart, spawned partly by the other quality aspects of the series to-date and the set-up for the next sequel. Daredevil down and out, although depressing, usually showcases our dark hero at his finest.