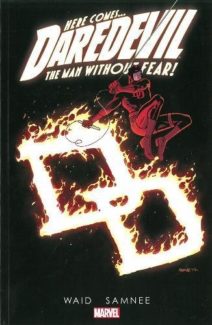 Volume 5 of Mark Waid’s Daredevil picks back up with the fraught superhero saga. We left Daredevil at a low time, a time when as readers we were furious with Foggy and certain that the friendship was beyond repair. But now, Waid proves his powerful understanding of human emotion and ties (one of the strengths of this action packed yet down to earth series.) Foggy and Daredevil are brought together, and in the way of all reconciliations it isn’t perfect. Foggy’s bizarre behavior has a very non-supernatural cause: cancer. In this imperfect reunion, Foggy and Daredevil certainly don’t say it all, or even what you want them to say. But, they do address what needs to be said to meet back in the middle and forget the rest, the falling out that nearly destroyed them and their law firm. And here is where the sadness of Daredevil’s tale creeps back in. Now that Daredevil has his loyal friend back, he risks losing him permanently to the only thing a superhero cannot fight.

Juxtaposing the inert nature of Foggy’s hospital bedside with Daredevil’s across city capers, artist Chris Samnee makes an eloquent statement about the nature of disease. Foggy even witnesses a moment in the children’s wing, where he has gone to talk about Daredevil, when he watches the young, ravaged faces laughing and drawing comics with their heroes (our Avengers) battling a Godzilla-like depiction of cancer. Saddened that the children think this possible, Foggy is soon taught that their hope is not naïve. They know that in the real world their heroes’ hands are tied, yet the world of imagination and the strength of their attitudes is what bolsters them through the dark days. In the end, the adult patients are the ones who are shamed, the ones who dwell on themselves and give everything, even their hope, over to a bleak landscape.

As Foggy tries to help his friend from what very well could be his deathbed, while also learning how to be braver than a superhero himself, Daredevil begins to unravel a scheme years in the making. Who has sent Coyote, Mole Man, Dr. Doom, all the others? Who is now sending men like himself, recently blinded and yet gifted with the second site of a radar-like power and superhuman speed? Who wants such desperate revenge and why? The answer is shocking and terrifying, the final villain being unveiled in a crescendo of unmitigated evil that showcases his truly heartless nature. Only now he does have one emotion: rage. 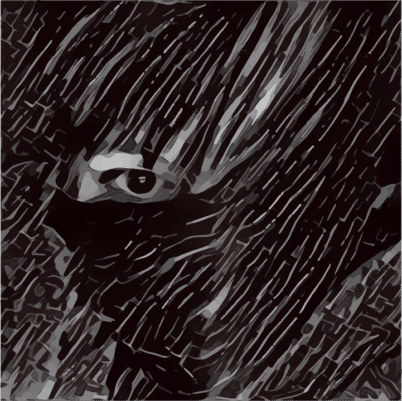 With limited time and no resources, Daredevil is beset by an army just as strong as himself, with a master assassin hot on his trail, and an enemy in the background choreographing a demise that is planned to be long and unforgettable. This time, Daredevil needs to rely more on luck than skill, more on wiliness than agility, and in the end, only dues ex machina can rescue him.

And that’s the only real issue here – the finale is epic and yet Waid walks Daredevil into a corner where only fortunate happenstance can rescue him. And this happenstance, and the vanquishing of the villain, is too quick for our liking. We want time to watch Daredevil’s ultimate nemesis truly suffer – at least for a few panes (haha, pains, get it?)

On a smaller note, Daredevil’s tentative romance with Mcduffy, which has been given some page space in previous volumes, including one highly memorable sequence where she blindfolds herself and walks with Daredevil to feel his world, is over with no grand finale or seeming purpose. She doesn’t care, and Daredevil doesn’t really care either. So why the buildup and the focus on characterizing her? Why the betrayal sequence set with Superior Spiderman who, himself, then vanishes? Was Mcduffy a mistake in writing, a character who introduced didn’t fully serve her creating purpose?

Still, despite some minor quibbles, Daredevil remains brilliant. I used to be someone who disliked the entire superhero lore (once rudely telling a date so – it’s ok, I later married this man). Said man educated me better and showed me that these are stories not just of power and epic battles (although there is lots of that) but stories of human emotion with just as much imagination and depth as my beloved books. Daredevil in particular has changed my mind and opened me to embracing a new kind of storytelling, a new type of protagonist. I’m not only hooked, especially by Waid’s ability to combine the best qualities of art and the best qualities of a novel, but by the beleaguered story of one troubled, somewhat dark superhero.