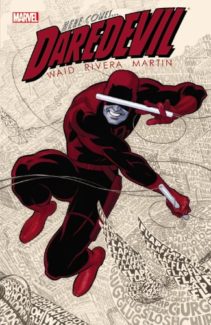 In recovery from the gritty 90s version of The Ultimates, my husband recommended Daredevil as a better introduction to the world of superhero comics. I’d long seen him curled up of a night around a Daredevil story and the vibrant cover art was at least appealing. Admittedly, I haven’t watched the Netflix series (his favorite) nor am I in any previous way familiar with the character. But why not give it a try? Surely there must be something in comics for so many people to love them, even collect them, and The Ultimates was a small representation of a vast genre. Plus, I want to know what my non-reader hubby found so enthralling.

Daredevil Volume 1 by Mark Waid is forgiving in that readers don’t need to be familiar with the character or his backstory. Not to say that it doesn’t help. When Captain America appears for a showdown over Daredevil’s checkered past (demon possession apparently), readers such as yours truly are confused and intrigued, yet still able to ultimately follow the pertinent material.

Daredevil himself is a blind lawyer, highly trained in the martial arts and leading a double life, superhero by night and courtroom crime fighter by day. Daredevil isn’t supernatural so much (ok, a little) as he is extremely intelligent and determined. His presence in a suit and tie, standing in court, is just as awe inspiring as his tightly suited up version, and just as engaging.

For someone without sight, Daredevil has ultimately learned to see a lot. The illustrations, crafted by Paolo Rivera and Marcos Martin capture a world alive not with images but with sounds. A long ago accident has left Daredevil with something similar to echo location and his naturally detailed nature plus acute hearing enables him to cobble together pictures of events around him – and they are certainly heart stopping. The way that this volume takes a blind man’s world and makes it into a visual and mental opus is stunning and original. I was instantly drawn in, partly by the story and partly by the unique manner in which artwork was able to capture the essence of a clever mind piecing together context clues and sounds to paint a picture of friends and enemies.

Daredevil’s story isn’t just confined to one villain and one plot. There are many and Daredevil is constantly besieged, both in his daytime identity and in his superhero persona. It’s amazing how the two blend so well and place nicely off of one another. The story interweaves a police brutality case against the sinister background of organized crime, the return of a supernatural power which controls sound and is intent on destruction, a discrimination case that is far more than it seems and leads another blind man into Daredevil’s world, and much more. From the daily to the dramatic, the story doesn’t stop and rarely, if ever, rests. Moments of quiet are mere preludes to action and the sense of drama is nonstop, complete, and entirely immersing. Throw in some of Daredevil’s trademark moves, and the use of his cane as both a seeing aid and a specialized battle weapon, and you have the makings of a fast paced action story with some soul.

Having let the world of Daredevil with all its quirky and horrifying villains compel me, I’m ready to jump to the next book in the series and to consider reading graphic novels more frequently, and perhaps even more seriously.