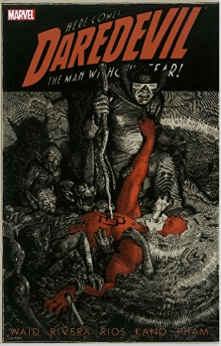 Fighting the forces of darkness has never been so raw, and so gut wrenchingly personal for blind lawyer and not-so-secret superhero Matt Murdoch – aka Daredevil. Beginning with a well meant fieldtrip for Cresskill School for the Blind that turns into a Christmas nightmare and ending in the subterranean, corpse filled world of the Mole Man, Daredevil Volume 2 is a tale of personal retribution and a shattering realization that justice frequently does not prevail.

Meanwhile, the hidden piece of Fantastic 4 power Daredevil hides is causing the criminal underworld to collude, leading everyone except the distracted Daredevil to suspect the luscious new love interest with the long wrap and the glittering cat eyes.  It looks like the bickering ultra-villains may be able to become frenemies long enough to push the down-and-out Daredevil over the edge of no return.

Waid’s Daredevil has several unique aspects which captivates readers, even those of us such as myself who aren’t really comic book fans but come more from the universe of rather good Marvel movies. The illustrators, of which this particular volume boasts four (Paolo Rivera, Emma Rios, Kano Kano, and Khoi Pham) create distinctive worlds, shifting from the sublime beauty of a snowy  fieldtrip into the cavernous subterranean world of the Mole Man and his sightless, grabbing demon horde. Regardless, whether the panel is grim or discordantly peaceful (if only for a few ironic moments) the entire tone of Waid’s writing captures the darker side of Daredevil’s doubts and the hard realities of death and all that it leaves both unfinished and unsaid.

As with Volume I  there is no central story but instead a collection of stories, one 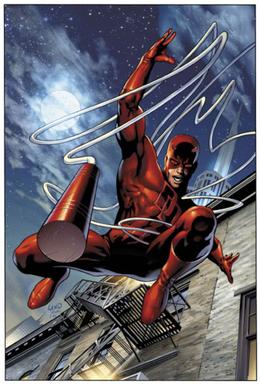 following the other. In this instance, however, there are fewer main stories (only four really) and the theme remains consistent. Most of the tales are starting to tie together except the perilous snow crash rescue which showcases a hero beleaguered on all sides and yet trying to do the right thing, always.  While the kick-assery is still in full throttle with Spider Man and Black Cat joining in the fray, the tone here is of a haunted and introspective Daredevil who despite the world calamities he is involved with thwarting is hurting from something far more personal and perhaps irrevocable. In this instance, both he and Mole Man have a similar purpose and confrontation with loss that gets at our darkest fears and most hidden thoughts.

The switch from the beautiful snow to the Stygian realms is one of the strongest elements of the artwork in this volume which in and of itself is enough to charm readers and convey the entire tone of the narrative, somber as this one is, alongside the subtle and ever morphing emotions of the heroes and villains who, perhaps, are only opposite sides of the coin. In Daredevil’s journey through Styx, however, he doesn’t look back, allowing for a sense of resolution which is not truly complete but nonetheless acceptable to a hero that acknowledges the imperfections in justice while trying not to fall prey to the same faults.

In the conclusion we come full circle with Volume 1, back with the mega crime horde and their inner squabbling which leads Daredevil to lay down an ultimatum which is just as ballsy as it is terrifying. Volume 3, no doubt, will follow this bombshell and allow us to see if our character’s bravado is any match for Black Specter.