Dance with Dragons, A 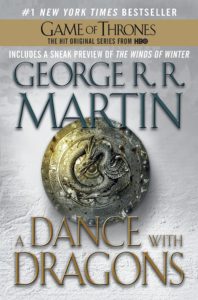 The (Final?) Game of Thrones

After starting nearly five years ago, I’ve finally approached the current end of the Game of Thrones epic (and to think, I was so sure by the time I got to A Dance with Dragons, all the Ice and Fire books would be out – what a sweet, summer child I was.) The fifth book in the series continues the split started with A Feast for Crows, focusing on just a few of the characters and introducing a staggering array of additional people, subplots, plots on plots, next generation plots, and pure filler.

In a Dance with Dragons, we drop our other characters (seriously, Jamie gets a chapter here and he is lucky) and follow Tyrion’s various stages of captivity; Daenerys’ choice to stay and help Mereen; Ceresi’s attempt to grab the Iron Throne; Theon Greyjoy’s brutal judgement at the hands of Ramsey Bolton; Jon Snow’s moping at the wall with the Red Woman; Arya’s transition into a weird, religious order assassin; and the shenanigans of a few other side characters and new characters who fall into the brew. This ultimately results in a haphazard plot that is becoming too complicated for its own good and has no idea where to go from here or how to put a pretty bow on any sort of finale. 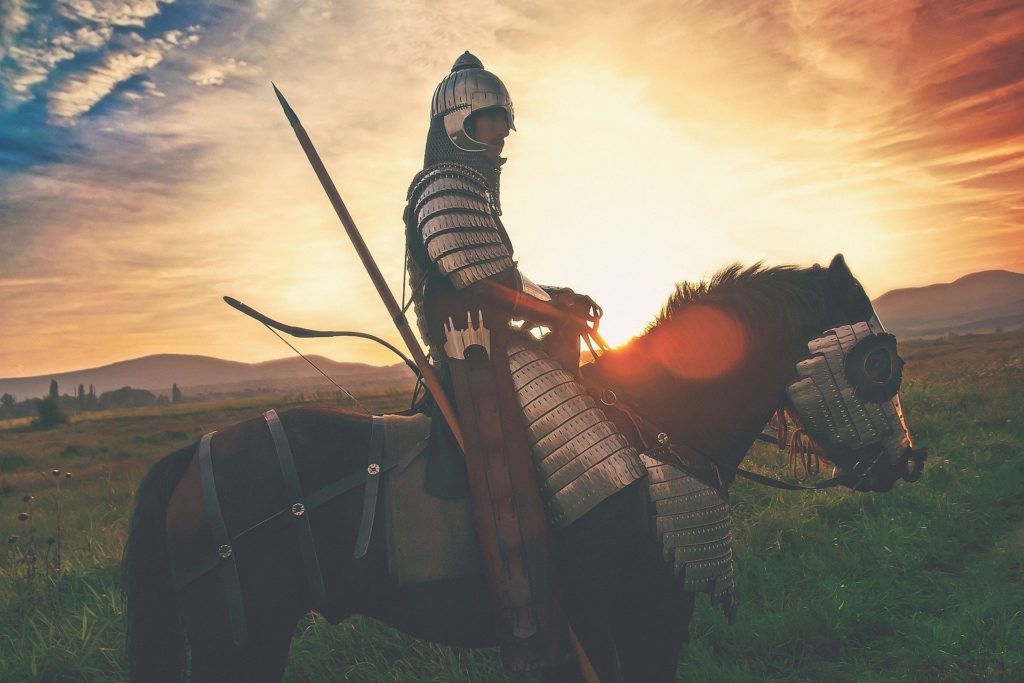 Martin knows how to write people and political intrigue, but we sense under all this warmongering and brutality, the desperation of a fox ready to chew off its own leg and escape the trap it walked into. Everything here is slow, and we can sense the narrative feeling its way and trying to bide its time until an idea happens along that saves it. Said idea does not happen, and what we get is 1,000+ pages that could easily be condensed, action and momentum wise, into 200 (still fillerish) pages. That doesn’t mean that A Dance with Dragons doesn’t have some of that Martin magic and some truly good and entertaining sequences. It does mean that all the sound and fury, however, doesn’t advance the plot much further. Here, we’re in the eye of the storm, waiting for an impact that doesn’t come, shuffling characters around listlessly. For the last several books we’ve been feeling the author’s turmoil, his admitted lack of surety. Here, it gains such strength that it practically becomes a character with the “what shall I do” conundrum drumming beneath every sequence.

Perhaps the most interesting story here is that of Ceresi’s rise and fall; this does accomplish something, after all, and leave the way open for further fights over the Iron Throne. It’s also good to see this villainess get hers in the end and watch her rat-in-the-cage scheming. Dany, my personal favorite character, is less fortunate. Instead of continuing her pull toward the throne, she is, seemingly endlessly, stuck in Mereen on this side quest that has taken over and suffocated the drama. Her dragons are in a pit somewhere, barely seen. Who exactly is dancing with dragons? No one here… A new character arises to try and take Dany’s hand and eventually lay claim to her dragons, but his plot, suddenly brought out of nowhere, fizzles like a sputtering flame. It’s filler, yet again, but at least it gives the dragons a few pages.

Tyrion has two story arcs, and yet his cleverness doesn’t come into play as much as it could. He is a victim of happenstance, first caught with a prince and crew making their very, very slow way up a river, and later as a pig-riding slave alongside yet another new character. Both plots have some merit, but they drag and it takes a long time before Tyrion gets to his next major setup. Throw in the bloody flux around Mereen, which affects Tyrion and Danny, and you have a book concentrated on plague (which is truly terrifying and well rendered) and the Iron Throne totally forgotten (less great).

Ayra continues to degrade as a character, her journey repetitive. The theme is to remain nobody, unknown. To change your face is to change your identity and heart, etc. Will Ayra learn this or continue to hold onto her past and the list of those she needs to avenge? And back and forth we go, her trainers repetitively trying to get into her head what we all know she will never accept. She may become a mighty deliverer of vengeance, but like everything else, that is somewhere in the mists of the dim future.

The Wall is somewhat more interesting, at times, yet the walking dead remaining noticeable by their absence. They’re still out there, we suppose, and still the greatest threat to the realm’s shaky safety. But this time, Jon Snow is all about the wildlings and the politics that come along with it as Stannis leaves the wall and Jon has to interact with the unlikable queen. Where the wildlings will come into play is fairly obvious. Sometime during this narrative, if Martin produces those other two books, the living dead will have to make some sort of showdown and this means the wildlings and their nemesis will need to fight side by side for survival. That still appears to be way off down the timeline though, and while this setup may help us get there, it isn’t interested with doing it quickly or efficiently. And, in all honesty, main character though he is, something about Jon Snow has always been tedious and boring: perhaps his dedication to the Night’s Watch, his altogether too-perfect to be, melodramatically broody nature. I can’t quite put my finger on it, but the Wall is only interesting for the side characters that step around Jon, not through any action or inaction of his own. 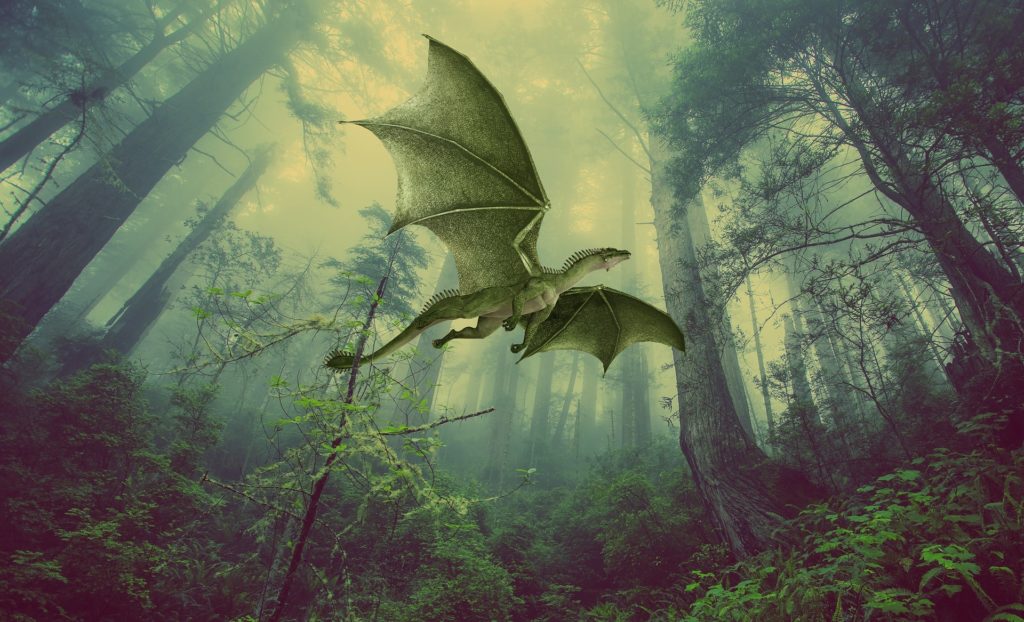 Surprisingly, the Greyjoys finally come into their own in A Dance With Dragons. Theon, and the general Greyjoy drama, has long been a sore spot for me. Each Greyjoy chapter was always met with an exasperated sigh and followed by boredom. I hate the Greyjoys. What Martin does here, though, with Theon gives the character a new life, and each of his chapters are interesting, his plight shocking, the darkness well portrayed and oppressive. Like much of the rest of the book, it doesn’t especially promote the plot, but it’s an entertaining segway, and I met these chapters with excited bursts of enthusiasm. Here, Martin was at his best dark magic.

Where the book really began to lose me, beyond its general floundering and slowness, which fans have long since accepted, is the introduction of so many new point of view characters. We have the Prince of Dorne, vying for Danny’s hand and dragons; Ageon’s moody heir traveling with Tyrion; the Sand Snakes and all their various court intrigues; and many, many more. It’s impossible to keep up with all these new characters, much less the plethora of old side characters (I admit, where the Boltons come into play I have long since forgotten), their tie or claim to existing plots, and their inner family/generational/national squabbles that, being a Martin book, go all the way back to the creation of this bleak world. It’s too much, especially when the characters we have been following for thousands of pages are sidelined for new characters and new plot shifts that (say it loud for the people in the back) DON’T FURTHER THE MAIN PLOT. We need resolution on what has already started first before introducing something new and, often times, these new people are destined to have a short life anyway (aka, Danny’s sudden suitor whose overblown story is one of the few that comes to a head and mostly just wastes our limited patience.)

That’s not to say that Dance with Dragons wasn’t enjoyable. It just wasn’t complete, nor was it Martin’s best work to date. It did still have a lot of the magic that comes with Martin’s writing though: an immersive atmosphere, complex characters and situations, moral quandaries galore, the shock value of a middle ages like setting and the ruthless bloodletting of wars and power grabs. It’s good, but hardly superb. It ranks as average fantasy, not as the extraordinary, genre defining stuff Martin started out by creating, back in those long forgotten days where we though Ned Stark was going to stick around. If we ever get another book, hopefully it will pick up the pace, stick with the main characters, and start to give us a payoff on all the carefully setup schemes and the endless foreshadowing.