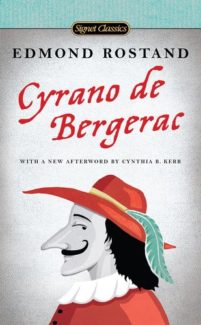 Famous for its tragic romance and the mismatch of ugly faces with beautiful hearts, Cyrano de Bergerac is more than a comedy of love-sick errors and far more than a moral lesson. Expecting a heart-rending “here is the fallacy of visual love” twist combined with the requisite repentance of the shallow and the finding of true love, Cyrano gave me (and his fictional compatriots) more than we bargained for.  Brash and dashingly warrioristic, Cyrano is a fierce character ready to do battle in flippant style. Life is as nothing to him, yet it’s not all honor and balderdash. There’s a good deal of panache to Cyrano who, although ready to run an incipient talker through can also parry with the best verses and the most dramatic, enlightened monologue. So there we have it – a character who is undoubtedly all the “bad boy” you could want who isn’t weighted down by sentimentality (he’d probably slay it) but with intellect and a surprising amount of epic self-doubt hidden behind the most extravagant lifestyle and nature. Cyrano, as many of you already know, may be everything a nobleman and a solider with a brash take-no-prisoners attitude could want, but he suffers from an ugliness proportionate to his legendary and massive nose. And so, for all that, Cyrano is a rooster fluffing fancy feathers and making noise to hide brittle chicken bones and a small self-esteem. Enter the love interest…

Roxanne, a distant cousin, is Cyrano’s secret desire, yet the man who will duel at the drop of a hat can hardly tell a lady of his deeper emotions. Convinced that he is undeserving of even an ugly woman, Cyrano waits in the wings and meanwhile lives out loud, entertaining audiences and his semi-terrified fellow soldiers with outrageous battles and the sharp edge of witty poetry. He may be over the top, but the delightful Cyrano is always hyper aware, and its for this sardonic bend of the knee to his own weaknesses and penchant to parody, that the character grows in our esteem. Readers route for the happy-go-slaying poet. Yet Roxanne, unknowing, is far more interested in the handsome albeit expectedly brainless Christian de Neuvillette – a particularly disrespectful pup in Cyrano’s own troop.

Counseled to take Christian under his wing, Cyrano’s jealousy is only as great as his love. Soon, he starts giving Christian advice and in this vicarious way, the story moves along as Cyrano sings in the dark to Roxanne and using Christian’s good looks, pretends to be the man of her dreams. Truth, however, will out when Christian gets tired of the brainy Roxanne and Cyrano, unable to be there at all times, leaves the man to his own, occasional, devices. This is where the tragic comedy comes into play and although readers want to yell at the cowering Cyrano for backing out of this battle, we still sympathize with him along the way.

Cyrano’s own self-destructive nature is perhaps more of a focal point than the entire “all things that glitter are not gold” plot. Yes, the uglier façade hides the more beautiful of the hearts, the truer of the loves, showing that loving for appearance alone is deceptive if not just plain bad judgement. What was, at least to me, more intriguing was the way a strong character like Cyrano, known for his fierceness, respected, feared, made a larger than life figure even as he lived, could allow his own doubts and fears to ultimately deprive him of everything. It’s the negativity of human nature to see only what is lost and never what is gained and the strange irony that often times the most popular, seemingly legendary people are the most haunted and secretly afraid. The errors themselves come more from fear of success than misbegotten “romance” and the grand flare of the story’s tragedy itself speaks to this more loudly than Cyrano’s monologues on the meaning of beauty and its relation to love.

That being said, the ages old story of a woman who falls for beauty over kindness is still the centerpiece. It’s hardly a fresh concept, but Edmond Rostand uses this play to bring it so vividly alive that for the audience, it’s as though we had never heard of nor seen the very idea before. Perhaps it’s the vividness of Cyrano which outshines and makes everything this story touches its own. Perhaps it’s the rapacious wit and the word play intermixed with an obvious love of language and authorship. Perhaps it’s the human weakness in so great a man that compels readers to be attuned to the “small” downfalls in life. Perhaps its just darn clever writing. Whatever it is, this classic remains oddly effecting, emotionally piercing, and literarily strong. Highly recommended for anyone who likes a good swashbuckling poet story with tragic overtones, violent endings, and unrequited longing for fairness in situations we secretly control.