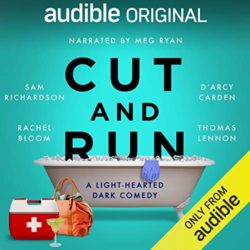 At almost three hours, Cut and Run is a fast-paced, wacky comedy about two organ-thieves, their hot-sauce obsessed crime lord boss, love in the weirdest places, and (oh yeah) a police investigation that just so happens to tie it all together. Samantha (narrated by D’Arcy Carden) is your average, good-looking, pseudo-moral organ thief, looking to serve some justice. She only takes your kidney if you really deserve it; she only takes the one kidney; and she’ll make sure someone gets to that bathtub full of ice in time to whisk you off for a brief hospital stay. Pretty on the up-and-up, really. Her sidekick, the slightly more pragmatic Abe, is the surgeon, and when the two aren’t stalking their prey, delivering organs to their jet-setting boss, and talking about how unsatisfying modern romance is, they’re having a pretty good friendship and discussing Abe’s will-he/won’t-he relationship with his author girlfriend who totally is NOT in the know. 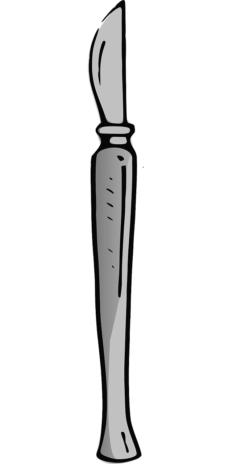 Everything is going along, business as usual, until Sam makes one tiny little mistake, followed by a series of big mistakes, and completed with an infatuation and a cross-country adventure. It appears that her latest victim didn’t really deserve the bathtub wakeup call (which he almost didn’t get at all because of a series of bizarre misunderstandings). It turns out he’s a good guy. The kind of guy, that in another place and time, if Sam hadn’t stolen his kidney, she could have loved. He’s also an investigator, which is really rather inconvenient now.

Meanwhile, Abe’s having his own crises of conscious. Should he marry his girlfriend? Should he let slip the little side hustle that he and Sam have going?

Narrated by a bubbly Megan Ryan, this story soars. From the first strands of the jocular music, to the break-the-fourth wall introduction, to the cast and characters, Cut and Run is out to have a good time. And it succeeds. The narrative is funny, tongue-and-cheek, weird and wonderful, and tied together with just the right amount of coincidence and dark laughs to keep everything unique and escalating into chaos. The story length works well too. The audience never gets overwhelmed with hijinks, but instead gets a short but satisfying ride through love, life, and the underworld of crime. As it should be.

You can tell the cast is having fun with their characters and getting into their roles, with Sam and Abe leading the drama (sort of like a lighter version of Jules and Vincent in Pulp Fiction). The banter flows, the actors become the people, and everything pings with energy. However, the girlfriend (Katie) comes along later as well, and her reactions do push the bounds of absurdity, even in this rollicking story. Gordon, the crime boss, fits in well though and the investigators are on the backburner just enough to create problems for our characters without ever taking the focus away from the escalating issues.

For anyone with an Audible subscription, Cut and Run is a must. It’s distinctly original content, done with an eye to quality, and just the right length to give you a taste of absurd humor at its best – sort of like a brief journey to the world of Carl Hiaason if he was into organ harvesting adventures tinged with romance. Highly recommended.