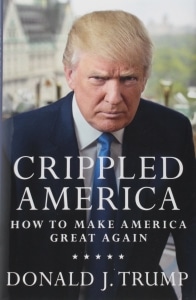 So – what’s all of this Trump stuff about anyway?

As an adamant political agnostic (politicians may exist but all of their statements are ephemeral, unprovable things), this complete mess of a primary actually managed to peek my interest. I have no party affiliation whatsoever yet sitting back my nighttime novel, hearing the Republican primary going in the background on that epic Fox battle that set American culture back decades, I got a bit curious. It’s an exceptionally ugly debate, even by political standards. We’ve gotten down to name calling and a literal “size matters” comparison. As if the tirade from the tube isn’t enough, anyone with a Facebook right now is seriously thinking of deactivating because of all the novel length statuses for or against a particular candidate. Only the memes of Trump’s hair make it worthwhile and even those are losing their zing. Still, there is something captivating about a rouge billionaire ‘dissing the two party system. Indeed, on the Democrat side Bernie Sanders is the extreme candidate of choice showing that ultimately, the American people are sick of politicians and ready for some epic change. With polar opposites of an egomaniac billionaire and a self-proclaimed socialist senator, history is in the making and pretty much everyone on both sides of the aisle is sick of their party’s traditional claptrap. So, I got interested. More specifically, I was interested in the agitator who caused it all and being more of a reader than a TV hound, I picked up Trump’s Crippled America to find out just what he is saying to get everyone so up-in-arms, including his own party and conservative news outlets which are desperate to shall we say, dump the Donald.

Crippled America is a short book, written to the people and coordinated with Trump’s forthright no-nonsense style. From my very occasional television watching, it is evident that this book captures the voice as well as the politics of its candidate (come on, we all know that a ghost writer did this – although with Trump’s propensity to do his own Tweets, perhaps he had more direct contact with the writing of this than I give him credit for.) Trump’s main points such as immigration, the failure of Common Core, job creation in America, growth of the American military, etc. are each covered and explained, giving readers a good foundation on what his most controversial opinions are all about. There is no line by line explanation of how these will be achieved, and of course, as with all politicians they promise to easily do things forgetting about Congress as though the president has full reign over all decisions. Nevertheless, Trump does provide more clarification here, particularly around the immigration issue and his famous wall theory. More evidence supporting his stances, including historical evidence and precedence are provided, allowing for a well-paced and thought out presentation than anything viewers have been able to see in the Jerry Springer like media debacle. Many of the arguments are compelling and while I find it highly unlikely that Trump’s grand wall project will ever see fruition, the premise is mostly well explained and Trump answers more specific questions here than I have seen elsewhere. That doesn’t mean that it isn’t still woefully generic, lacking complete fleshing out, merely that this is the best, most explained version to date.

The strongest concentration areas are on immigration, bringing jobs to America via relaxing egregious tax laws to encourage corporations to establish bases here instead of off sourcing to other countries, and education. Immigration is the issue that originally captured my interest in this particular debate since many of my coworkers and close friends are from India. After ten years, many of them still have not been granted official citizenship and often fear deportation if they were to lose their job (or client.) Watching this consistent unfairness and the struggling of people willing to work hard and follow the rules lead me to hear more of what Trump was saying. His immigration strategy, as explained in this book, is twofold: crack down on illegal immigration while also making the legal immigration process itself more accessible. This secures jobs and security for American citizens while continuing to encourage immigration, essentially solving two problems at once. Of course, there is a lot more to this quandary than I am covering here. The book itself goes into more details of the hows and whys more thoroughly than any of Trump’s speeches (that I have seen).

Likewise, taxation (the ever present goblin in the circus show of politics) gets almost as much page space as the hotly debated immigration issue. Trump examines the reasons why corporations prefer to go-offshore and proposes incentives to regenerate income within this country, encourage corporations to create jobs here, and also encourage immigrants (legal that is) to spend money within this country.

Common Core gets one chapter only, but it is one of the most powerful. Regardless of your personal politics, pretty much everyone agrees that education is almost non-existent in the schools anymore and Trump suggests a system to oust bad teachers and reward those who are dedicated. This encourages a more competitive instinct within schools to provide higher education and encourage students, instead of merely being a subsidized organization that abuses a flawed system and ultimately ignores the needs of individual children.

Of course, foreign policy is mentioned although oddly, not concentrated on. There is a chapter dedicated to policy, refutations of the disastrous Iran deal, and promises to be tougher as a nation and more supportive of our allies. Beyond the one chapter, however, foreign policy gets less page space than Trump’s concentration on “making American great again” which seems more inward focused than outward focused (although fairly aggressive on both fronts.)

Trump also deals with the media and media reactions to him, including mentioning Megan Kelly from Fox (who I admit personally irritates me in the extreme.) This section was especially interesting to me since one of my college majors was Communications and I had envisioned a career in journalism. The bias of the media comes through strongly during this election and Trump is often not allowed to finish statements or extrapolate his political theory, taking the choice away from the American public and inhibiting our ability to hear a candidate all the way out.

Of course, it is Trump, so the hubris is very much there. I suppose to even want to be president, much less run, a huge degree of self-confidence is necessary and that comes through in Crippled America – perhaps too much. The “I can do” attitude is strong and brought through, enumerated by various building projects ranging from Trump Towers to his many golf courses and luxury hotels, pinpointing how Trump, as a businessman, can take on complex situations, often internationally, and see them through to success. The practical experience and the ability to handle business does give Trump an advantage over career politicians who live in theory and have as yet to prove anything in practice. Yet . . . he could mention the buildings and the golf courses a lot less. A little of that, a very little of that, goes a long, long way. He also mentions (and defends) his hair in one place, although only once (which for Trump shows extreme restraint.) Nevertheless, a direct correlation between a vast building project and running a country doesn’t entirely jive and the continual “I built this and it was great” refrain gets exceptionally frustrating.

The book will polarize. Trump, in typical fashion, says exactly what he means and doesn’t try to couch anything in white washed terms to appeal to one group of voters or another. This is refreshing in that ultimately, you never really have to wonder what he thinks on any particular issue and the lack of political correctness/concentration on “being nice” cuts through a lot of red tape to the core of many issues concerning the American people which are often felt too controversial to be approached. Regardless of your own political inclinations (or lack thereof if you are a fellow party agnostic), Crippled America is an excellent introduction into the basics of Trump’s campaign and his stance on key issues. The book provides more specifics for each stance than heard in the debates and gives the reader a stronger foundation in understanding Trump’s proposed approaches. Am I convinced – yeah, actually. Many of the things that Trump states appeal to what I already felt but could not articulate and many of them cut through the pleasantries of what is supposed to be said to get at underlying issues. Am I adamant that Trump is a good man – no. Is he good for American – maybe. Trump’s brashness has an un-presidential aura and his inability to take slights (evidences here as well where he name drops those that harmed him) leaves Americans wondering if perhaps some of his policies might be sound but his personality too volatile. Has this book caused me to be interested in the campaign – actually, yes. I might even vote. We shall see.