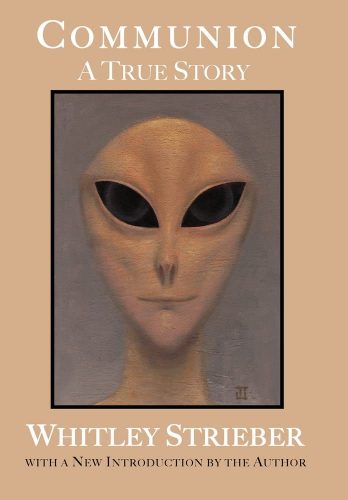 Whitley Strieber, popular horror/thriller author, claims that he has been abducted by aliens several times. He has been experimented on; he has conversed with his captors. Now that he starts to untangle the threads of the supernatural in his life – and in his wife and son’s lives – he is beginning to arrive at a conclusion. Some kind of discourse, some communion, for some unknown purpose, is taking place. But why? And what does it mean? Is it a weird breakdown in the brain? An unknown disease, a cultural fear, or a real connection with another race, either from this planet or beyond? What does it mean and why is his own mind still protecting him from fully remembering?

Communion is a non-fiction book. I came to it in the way of most strange stories, through a book club. The month’s theme was not my favorite: aliens. The little green men have never instilled fear or even much interest in me, but I have often found my preferences successfully challenged by being a little more open minded about what I read. Thus, the addiction and devotion to book clubs.

Communion, however, was a total flop from my perspective. The book is not well structured. It jumps around in time and is interrupted often by Strieber’s weird blend of pseudo-science and philosophy. And what we really want – the recounting of what happened during these abductions – is obfuscated on several levels. There are no strict memories here, but rather a story told in fits and starts through the extremely dubious form of hypnotism, a technique that remains more late-late show than proven science.

Strieber tries to keep it honest by giving us a transcript of each hypnosis session, and they are invariably vague and difficult to read. Strieber is wishy-washy on his answers, and the actual story (if there is one) is so far buried that it is indecipherable and not especially convincing. The same can be said as Strieber’s wife and children join the mix.

What is interesting about the book is that Strieber is realistic with his skepticism. He does admit that it could be some sort of mental aberration, perhaps common in a certain amount of people and not yet diagnosed. Yet, he is not closed off to the idea of being contacted by visitors, and he is not sure that they are inherently evil. They may be more threatened than us by anything, and the author compares what he suspects is an insectile hive mind on their part with the fearful reality of our own individual minds, something they can neither understand nor effectively control. It’s interesting, but not enough.

Strieber ends the book with some exceptionally weird philosophy, half woke, half 1970s late night sci-fi, that falls completely flat. In the end, we still don’t have that clear picture of what happened, or what he thinks he recalls happening, but we do have a lot of useless conjecture and poorly written hypnosis section reports. Not recommended, unless you are an avid UFO and alien non-fiction fan.