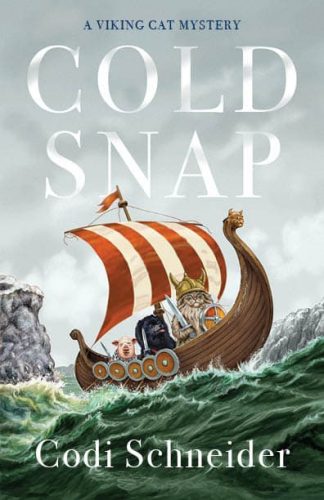 Before I recount this tale, an introduction. You may call me Bijou. Though Brynhild or Freydis would be more fitting because, despite my French name, I’m 100 percent Norwegian Forest cat. Possibly 99 percent. I know this because I have beautiful long fur. And the strength of ten bears. Also, I’ve earned exactly 103 tabby stripes of bravery. My ancestors, dear reader, were Viking cats. Rapturous specimens and decorated longship mousers possessed with the Ancient Bloat of Respect. That bloat now resides on me. Some might say I’m overweight, but I know better. This bloat has been passed down through posterity and hangs proudly between my knees. And like all forms of respect it must be fed frequently. (1-2.)

What is dearer to a crazy-cat-lady/bookworm with an addiction to coffee and a penchant for mysteries than murder most foul, cozy Victorian manors, Colorado snow, a sweet romance, and a feline sleuth with a hefty bloat and dry wit? Codi Schneider’s Cold Snap is everything that a cozy mystery lover / animal lover could ever want and then some. Within the first page, I was hooked by Bijou (the Norwegian Forest cat inspired by the spirits of her fierce ancestors) and her narration. And, of course, by the horror of the body she found and the mystery of the dognapping that surrounded it. Bijou’s quiet little village of Gray Birch is about to be rocked by scandal, betrayal, and long ranging evil schemes.

Bijou and a mentally negligible Pomerania with a hankering for patchouli (Skunk) live in a Victorian inn just for animals. Day to day they watch after the comfort of the various guests and help Spencer, the young woman they call Momma, keep things hygge. Everything changes though when a dashing man, Eddy Line, buys the old firehouse and turns it into a bakery. As the renovation goes forward, Eddy needs a temporary place to live. A place where he can bring his puppy (Fennec) and his sweater wearing miniature pig (Hamlet.) Thus, a friendship blossoms between Eddy and Spencer, and maybe something a little deeper is building between them too. Bijou, however, is less than happy to live with a swine, until she discovers the famed Viking pig (Hildisvini) and decides that it is her calling to train Hamlet.

As humans and animals work through daily life, Eddy starts to receive none too subtle threats. But he is determined to go forward with Witching Flour. When opening night ends up in a murder and dognapping, Hamlet, Bijou, and Skunk must band together to keep their humans safe, rescue Fennec, and solve the murder. 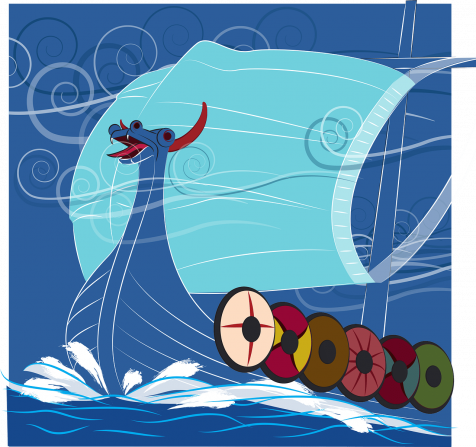 Image by Giampiero Ruggieri from Pixabay

Cold Snap is cute and cozy, but it is a surprisingly robust mystery as well. There are a few narratorial snags as the story starts, a few moments that seem forced and a few jokes and plays on words that are just downright weird, but then the tale starts to flow, everyone gets comfortable, and readers are torn between the cozy and the edge-of-the-seat shenanigans. The rush to save Fennec is even more real, and more pressing (to me) than the murder and the author does a good job imbuing the narrative and her human and animal characters with worry without destroying the ambiance of the inn or the beauty of a snowy Colorado day. Very well done.

Bijou, Hamlet, and Skunk are the stars of the show here, and it works surprisingly well. While Spencer and Eddy gather clues, Bijou and company use the animal network to find out exactly what happened that night, and they race ahead of the clueless, frantic humans on a quest that is truly deadly and, in the end, downright nerve wracking. The theme of the dognapping is a serious one, talking about dog fighting and animal abuse, and while the story has its light and airy moments, there is a deep compassion for abused dogs in fighting rings and a cry for awareness and action that takes the book out of the confines of entertaining fiction and makes it relevant.

Despite the murder and Fennec’s brutal past, Cold Snap manages to end on a happy note, pulling together all the threads of adventure and quest, and even giving Bijou a literal moment with his Norse gods at the end. I usually read upwards of ten books at a time, but I had soon set them all aside to spend my time following Bijou through the snowy, secretly scandalous town of Gray Birch. I was disappointed to see that the second book in this series isn’t out yet, but I remain hopeful that Schneider will grace us with another Bijou mystery. It’s clear that the author’s skill and storytelling ability is only going to get better, more fluid, and more comfortable from here.