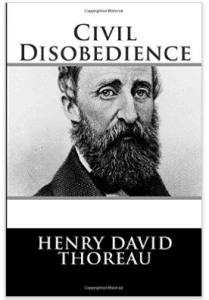 Civil Disobedience: What the Essay is All About and Why You Should Read It

Touted as an essay which promotes conscientiousness and decision from the citizens of a government which, like a machine, churns out injustices, Civil Disobedience is a pamphlet sized “book” that many of us first encountered in school, probably multiple times. I do recall, vaguely, being assigned to read it in college, sitting down to the very tiny copy of it I had, which was unusual in that it wasn’t shoved in as a part of an anthology of other works by Thoreau. I remember not loathing the essay as I had when encountering other Thoreau items and even finding it interesting albeit disjointed in some places. I shrugged it off, continued slogging through the quagmire of education, and forgot the experience. Years later, doing a classics kick, my copy of Walden came along with a freebie – Civil Disobedience thrown into the back. It was a bit much Thoreau for me, but I can’t put down a book without finishing everything in it and besides – wasn’t the point of my scheme to increase my knowledge.

On my second encounter I feel much the same as I did the first time: I enjoyed the essay in an apathetic manner. It’s nothing lasting, although certainly Thoreau’s abhorrence of slavery and intention to write avidly against it grabs the reader with a refreshing feeling of outrage and justice. Admittedly, his rants on the Mexican-American War prove a little vaguer at least for those of us with an ambiguous relationship to recalling history.

The essay was famous more in the fact of who and what it was responding to, not in the quality so much of the writing. Don’t get me wrong, the writing is well executed but Thoreau with all his transcendentalism has issue with sticking to the point. At the time of reading it flows well enough, but an hour later the reader is wondering why the long stint with Thoreau in jail, refusing to pay his taxes. Why so much time here? Why not more concentration on the issues at hand. The call to action is there, but the usual, I don’t know, essay like nature of a formal work, usually demands an entire argument from inception of the evil to its propagation and a call to arms to stop it. As with Thoreau in general, we pick up in the middle of his thoughts, in the middle of an argument as it were, and the piece looses some strength if we don’t have a background in the events of the time and the people, such as William Paley who wrote Of the Duty of Civil Disobedience, to whom Thoreau was responding.

But I’m rambling. Thoreau does that to me. I’m never really quite sure how I feel about him and all that shining intellectualism. But you say – you who are doubtlessly reading this review because you have to do a college paper – what is the thing actually about? In a nutshell, Thoreau propagates that it is a citizen’s duty (therefore read civil duty and not civil as in polite) to resist and “stop the machine” when it goes awry. The system is represented as a brainless, grinding entity that sometimes does good and sometimes evil. It’s the citizen’s duty to observe the machine and throw the wrench in when society waves from the straight and narrow. Specifically, Thoreau is talking about slavery and, as mentioned before, the Mexican American War here, but his point is more universal than the issues he was responding to and it is evident that he is making a general plea. Even if the issues he mentioned were redressed, there would always need to be watchdogs in the system. Interestingly, Ghandi read “civil” as meaning polite and went with his own theory regarding a pacifistic resistance. This, however, is not Thoreau’s pretense. Thoreau even enjoys his jail time, refusing to pay a tax which a neighbor, thinking he is doing a good turn, eventually pays. While not violent his calls for action are hardly dormant. More of a gentle, but steady pressure against that which is wrong and a complete unwillingness to promote or further that evil in any way. Even polite quietness on a subject is not allowed – a citizen must stolidly not participate in that which s/he sees as wrong – regardless of the legality of so doing.

And so, my second tussle with Thoreau proves valuable, educational, even a little enjoyable. As with many of those “school assignment” type books, Civil Disobedience proves that it’s not a dry lecture but a living, passionate cry for individual morality. Is it as good as a lovely novel? Well, no . . . but it is doubtless something that should be read, at least once.