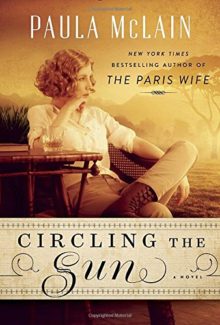 Recently touted on the Book of the Month Club’s website, Circling the Sun caught my immediate attention by capturing two of my favorite fictional formulas: the novel was set in Africa and about an independent, I-live-my-own-way trail blazing woman. What’s not to love? The answer: quite a lot actually. Taking the true story of Beryl Markham, record setting aviator (and one of the first females to earn a horse training license) and third wheel in the love triangle later immortalized in Isak Dinesen’s Out of Africa, Paula McLain weaves fact and fiction into a low-key, slow paced speculation.

From an early age Beryl is different, desiring to be wild and befriend the local boys/tribe children/warriors-to-be while casting aside society’s perceptions of proper female behavior, enforced by her father’s pseudo-wife. Readers settle in to watch the mystery, magic, and danger of early 1920s Kenya through the eyes of an investigative child. A lion mauling plus some strange neighbors bodes well for getting us truly down with this place supposedly outside the rules. Yet Beryl’s childhood takes up only a few chapters and soon she is a woman – a woman who is romanticized based on that old colonial perception of Africa as some sort of native dreamland where rules, both moral and social, can be gallantly ignored. It’s jarring and sudden –  this “lively” young woman is a stranger, her background too swiftly portrayed to be effecting or even memorable.

As an adult, Beryl still loathes the feminine ways and daintiness that is hoisted on her, almost as much as she hates her first husband. What she does love, however, are horses. Initially, Beryl struggles through a sexually dissatisfying marriage while building her name as a first-rate horse trainer. Beryl’s sensuality and desire to be wild and unruled lead to an eventual series of violent confrontations with her husband and later, finally, a divorce. Several strings of lovers later, including a gangster like-drug lord, a momma’s boy aristocrat, and her best friend’s true love, Beryl is still seeking herself. The danger and the challenge of competition fills her mind endlessly, yet in the background there is always the noise of discontent and the constant searching for a freedom which is just as fleeting as it is all important.

Circling the Sun, as the fictionalized story of a daring, courageous woman who elicited repeated scandals everywhere she went and broke all the rules along the way, may sound juicy, yet the novel is distinctly sedate, slow-paced, and surprisingly sorrowful in that unfulfilled way of all cynics who have simply given up. Beryl’s formative years, including the abandonment of her headstrong mother, friendship with Kibii, and attachment to her father’s Njoro land is a blip, speed through and barely summarized. In consequence, all the defining moments that have created such a broken and yet powerfully independent protagonist feel breezy to readers. We cannot truly care for (or understand) Beryl and despite being told that she is outstanding, brazen, brave, strong, blah blah blah she mostly comes off as selfish, lost, and surprisingly bored with her own high-octane, laugh-death-in-the-face type of life. When she gets involved with a set of expats known for their voluptuous style of living and loving, the discontent of the entire bacchanalian group infects the text and slows down the pace to a grinding, trivial pace.

Despite Beryl’s historic achievements, Circling the Sun doesn’t have much, if any, of a plot. Beryl’s later love, and consequential record breaking shenanigans, for flying come in very late, as in the last several chapters of the book late. Her horse training, although mentioned as a difficult task, also takes a backseat. If forced to focus on an element of story to summarize, or describe this book to a friend, I guess I would mostly say that it’s about Beryl’s philosophical and not quite conquerable feelings about relationships and sex. In love with her best friend’s (the famed Isak Dinesen, who’s cheating on her husband, who knows and doesn’t care) lover, Denys, Beryl is drawn to the fact that he needs no one, wants no one, and can be tied down by no one. Thus begins a long affair that while central to the book, doesn’t truly reveal anything much about Beryl or Denys. Denys, indeed, is a blob. Beryl, when we do feel something beyond apathy, is not the type of character to attract either empathy or loyalty. Her emotions, far from being raw, feel removed and conceptual and her desire to retire from human contact on an emotional level gives her all the markings of a sociopath. Indeed, Beryl uses, and discards, men with seeming indifference and the majority of her choices (specifically a risky abortion and later the birth of an unwanted, handicapped son) remain emotionless, distant, and uncomplicated. Her betrayal of her best friend is likewise not the type of move well suited to gaining audience admiration. Her deep love of Denys could, supposedly, make readers feel anyway, yet as with everything else, it’s merely a temporary distraction in a life so devoted to avoiding entanglements that readers pass Beryl by equally unaffected and un-entangled.

The ending shudders into a free-loveish sort of revelation (which I suppose was more novel during Beryl’s time, although her wild compatriots, historically researched, make me think otherwise) and poorly explained fascination with flying which eclipses what was her former obsession: horses. None of it feels as though it flows together or makes any sense. Beryl herself seems emotionally dead, or stunted, and the way that she flows through life in hopes of entertainment, and all the shattered people she leaves behind, proves meaningless in the end. It has no grand effect on her and therefore, no real meaning to the reader either. It’s a narcissistic, self-conscious book that is weighted down with the heat of Africa and the superiority of lavish aristocrats in a land not theirs continually taking and never giving. There is no freedom here, merely boredom and a certain cyclical pointless dissatisfaction that covers everything, even the bravest of actions, in a fine coating of dead dust.