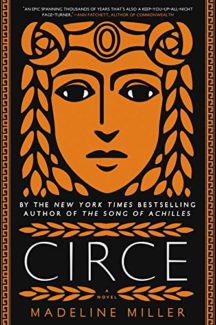 The Lonliness of Gods

I lucked into discovering Circe through Book of the Month and instantly knew it had to be mine. Many cheerful childhood hours were spent devoted to Greek mythology – its creativity and power a shining testament to imagination and emotion. The Odyssey, the story of Odysseus who seeks his way home from a bloody ten year war for Helen of Troy, is wrought with encounters ranging from fights with a cannibal cyclops to encounters with beautiful but dangerous witches to direct interference from the fickle gods themselves. And in this story there is an island, a temporary refuge for Odysseus who convinces the divine witch who lives there not to turn him into a swine but to take him to her bed and into her confidence. This then is Circe – a temporary villain in The Odyssey and a heroine in Madeline Miller’s epic worthy retelling from the prospective of the goddess herself.

It begins, as all things do, with a birth. Circe, the daughter of Helios, mighty Titian god and owner of the glorious Oxen of the Sun, is a disappointment to both beautiful nymphs and the gods themselves. Weak, powerless, and very much akin to the loathsome mortals, Circe consistently provides love and honor only to be turned aside, tormented, bullied, and eventually forgotten. Growing with the fastness of a god and doomed to immortality in the beautiful, sterile realms of boisterous palaces, forever on the outside, her desire wars with her wrath. That’s when chance, mistaken love, and betrayal lead her to discover her one true talent – a sorcery so strong that Zeus himself is afraid.

Banished for her creation of both gods and monsters, Circe is alone again, caught on a beautiful island where all her needs are met (she is still a minor god and the descendant of a Titian, after all). When mortals discover her island, she envisions an end to sorrow only to discover that just as the gods are callous men are evil. Only the stalwart and wily Odysseus proves himself different and avoids a fate worse than death. Along the way, his attachment – all too temporary because he is always driven home to his faithful wife and child – shows Circe the way to ensure a future where she is no longer abandoned. Or so she thinks. But that which you love most is also what can hurt you most – especially when a very powerful god becomes enraged. Now Circe must choose a side – gods or man, immortality or death.

Miller’s book is breathtaking from the beginning – and recreating an epic thousands of years old is no easy feat. How to make something both modern and yet ancient, lyrical and yet true to the tone of Homer’s epic, something many of us were practically weaned on. I began both skeptical and hopeful. How can you retell a cherished story and yet . . . what drove the ancient Circe to live alone and turn the stranded sailors who reached her island into pigs? Why did she struggle to keep and deceive Odysseus and yet send him home with both advice and instructions? Homer never told us, but Miller does and herein we find a strong female character – powerful, yet fallible, both emotive and strong. Circe is simply compelling and even her villainous acts – of which there are many – demand reader’s empathy.

Circe’s voice is a conglomeration of pain and strength, but it’s the all too human sense of her plight that pulls her away from the austere realm of the god’s and into our sympathies. Whereas the gods delight in their cruelty – a way to break up the endless, indulgent nature of immortality – Circe sees and desires something more. At her core, she is kind. Yet, she is also very wounded and as her life unwinds her actions – turning men to pigs, creating monsters, even abetting a minotaur – suddenly makes a heartbreaking kind of sense. When you your back is to the wall, even the best people come back damaged and fighting.

Nevertheless, Miller sticks to the mythology which created Circe. The events of The Odyssey are faithfully rendered as well as those mentioned in The Iliad. We meet Daedalus, creator of Circe’s famous loom and father of Icarus. We are at the birth of the Minotaur. We discourse with fleet footed Hermes. We treat with grey eyed Athena. Cilia and Charybdis wreak their deadly vengeance in real-time. The Oxen of the Sun graze, blazing in all their white glory. Odysseus’s rowdy crew, including the man who fell from the roof; Circe’s tame wolves and lions; her father’s travels around the sun – It’s all here and even richer than when we first heard it. Madeline Miller crafts a tale thousands of years in the making – one we know by heart – and yet here it is new and fresh, suspenseful and exciting. Highly recommended.