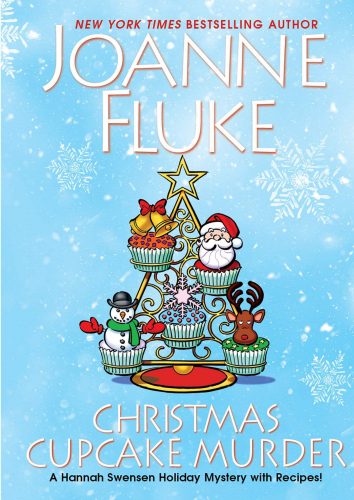 In Christmas Cupcake Murder, we’re once again back-in-time at the beginning of Hannah’s sleuth-on-the-side gig. At this point, the Cookie Jar is up and running and quite the success, but Delores and Carrie haven’t bought their antique shop and Hannah’s little love triangle is in its infant stages. But the never-ending crime wave that plagues this seemingly bucolic little Minnesota town is already at full blast.

This time, we don’t get the murder the title promises (but hey, this series has long chucked aside that pesky realism.) Instead, as Hannah helps her mom scope out the perfect location for an antiques business, she runs across a homeless man, new to Lake Eden, who is unconscious and slowly freezing to death. After the initial surprise, Hannah is on the case and the man is saved. The twist? It looks like someone tried to murder him and failed, but the hapless, good-natured man can’t even remember his name now! With this new John Doe in town, Hannah feels compelled to help him remember his past, return home, and find out who tried to take his life before it happens again, all as the holidays barrel full force on them and local decorating (and catering) is at its apex.

What is there really to say? If you’re still here, twenty odd books in, you know the formula by now. The writing has gotten quite bad, the conversations are stilted and banal, the return to the past is another attempt to dodge a final revelation of the insolvable love triangle, and the timeline is one epic mess. Hannah and company are also superhuman by this point, having eaten enough chocolate to permanently mutate them into some sugar siphoning monsters, akin to the salt monster on Star Trek. There really is no other way they could have survived the gout. Evolve or die, you know?

All kidding aside, I enjoyed this offering, even though every rule of good literature (or just entertaining reading) has been broken time and again by this series. I can’t explain why I still come back, why I like it. If I had started the series with Christmas Cupcake Murder, it would have probably been an instant one star and I would never have picked up anything else in the Hannah Swenson series. Yet . . . I found Christmas Cupcake Murder four-star worthy compared to the other books about Hannah’s life of late, and I enjoyed myself immensely. There is just something about this utterly stupid, yet cozy world. I love it. I love this town. I love these people. I can’t explain it. I think you HAVE to start at the beginning of the series and follow Hannah to have this much love (and forgiveness).

Anyway . . . nothing new happens here, except the cell phone averse, technology incompetent Hannah, who has not had a cell phone for the last twenty books, randomly has a totally modern one in this back-in-time endeavor. There is no progress on the love triangle. The mystery solves itself because everyone is too busy overeating, having pancakes followed by cookies followed by heapings of lard and a truly horrifying recipe for “rainbow pickles” (oh, my clogged, clogged arteries). If you’re a die-hard fan and still here, you’ll find this one of the better recent offerings. If you are a sane human, run, run far far away.